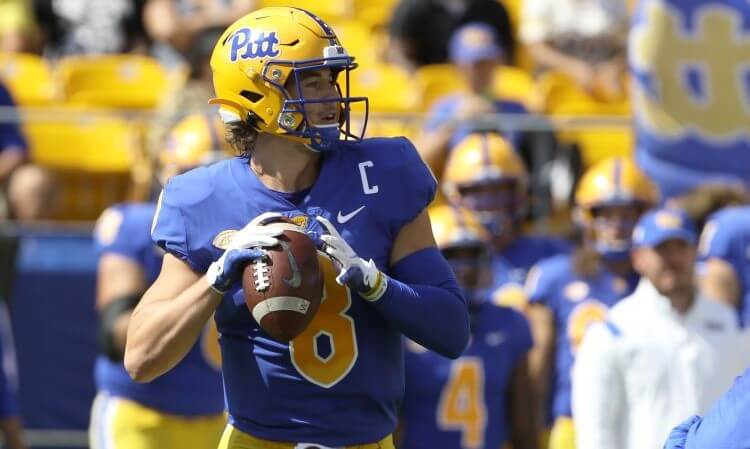 So what happens to a Heisman Trophy candidate’s chances when the quarterback throws for a school-record 519 yards and three touchdowns?

Well, if you’re Kenny Pickett, and you play for a Pitt team that gets upset at home by Miami, you pretty much drop out of the equation.

Such was the case with odds for the Heisman Trophy at most of the state’s online sportsbooks. A week ago, with Pitt ranked 17th at 6-1 and an unexpected favorite for the ACC championship — mostly due to Pickett’s stellar play — the various sites listed him +1200 or better to claim college football’s highest individual honor.

After Saturday’s 38-34 loss to Miami, which did include two costly interceptions by Pickett after throwing just one all year, only one site had him as anything still resembling a legitimate candidate: BetMGM at +1100. Other sportsbooks mostly listed him +2500 to +3000, with BetRivers, Unibet, TwinSpires, and other sites using Kambi odds making the fifth-year senior a bigger longshot at +4000.

There won't be a Heisman Trophy for Pickett or a playoff appearance for Pitt. Those talks are over.

An ACC Championship? Still something to play for.

Others have similar stats, but with better teams

It’s not like Pickett was likely to win the Heisman anyway, as other candidates play for bigger powerhouse schools ranked higher nationally and deemed to play stiffer competition. A Pitt win would have nudged the Panthers close to the top 10, however, and if they had won out and claimed the conference title, it could have made things interesting.

Alabama quarterback Bryce Young is the Heisman favorite, with fellow QBs C.J. Stroud of Ohio State, Matt Corral of Mississippi, and Caleb Williams of Oklahoma behind him. Here’s how their 2021 statistics compare with Pickett’s, along with their present Heisman odds on FanDuel, while keeping in mind that Williams only took over as the Sooners’ starter several games into the season.

It should be noted, meanwhile, that Michigan State running back Kenneth Walker III bulled himself into the Heisman discussion alongside the quarterbacks by running for 197 yards and five TDs in the Spartans’ monumental win over Michigan Saturday.

Walker has 1,194 rushing on 6.8 yards per carry, with 15 TDs overall. FanDuel lists him at +600 for the Heisman, alongside Corral and ahead of Williams, but the Kambi sites now actually have him as the favorite at +150, ahead of Young at +175.

One disastrous play when Pickett was picked

Pickett could hardly be faulted for Pitt’s loss — or its prior upset by Western Michigan — considering all he’s done while now surpassing Dan Marino as the school’s record-holder for career TD passes. The defense deserved primary blame for both losses.

But there’s one critical play on which he misfired that was costly for both Pitt and for his Heisman potential.

Pickett had led the Panthers back from a 31-17 halftime deficit, and with less than five minutes remaining they had all the momentum, moving from their own 5-yard line into Miami territory while trailing 38-34.

On a 2nd-and-18 play from Miami’s 31, Pickett threw behind his favorite target, Jordan Addison, near the goal line. The pass was intercepted at the 4, and Miami managed to run the clock out on its final possession.

Pitt still can have a successful season with an ACC title — it is the favorite at +120 at FanDuel and FOX Bet and +125 at DraftKings — and Pickett will likely be one of the first quarterbacks chosen in the 2022 NFL Draft, but any Heisman hopes effectively ended with that interception.