Schools have turned in different directions on eve of big games against Miami, Ohio State 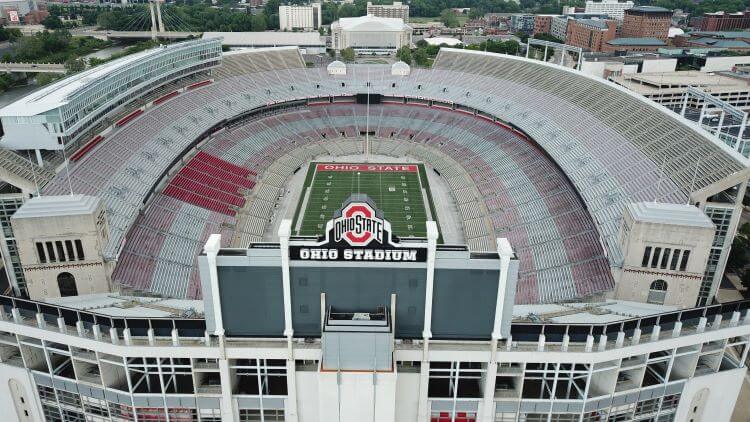 Penn State’s visit to the Horseshoe Saturday night has lost much of the luster that might have existed two weeks ago, while Pitt’s noon game at Heinz Field has more implications than might have been expected.

The Nittany Lions have become much bigger underdogs against Ohio State as a result of two straight losses preceding ABC’s prime time telecast, and the Panthers are unusually large favorites versus Miami after steamrolling their way through ACC play thus far.

The two games highlight a weekend of NCAA options from the Pennsylvania online sportsbooks that also includes Temple as a double-digit underdog hosting UCF.

It wasn’t long ago that Penn State was leading Iowa at halftime, which, if it had held on, would have resulted in PSU becoming ranked No. 2 in the nation afterward. Instead, it’s been six quarters – plus nine overtimes! – of misery since then for the Nittany Lions.

A week before playing the Buckeyes, Penn State loses in 9 overtimes to Illinois. That had never happened before. https://t.co/rFjE5QmvCS

The historic and unfathomable loss to Illinois last week as a 23-point favorite has Penn State (5-2, 2-2 Big Ten) slipping to No. 20 in the AP rankings as it takes on the 5th-ranked Buckeyes (6-1, 4-0), who have been surging as an offensive powerhouse.

The oddsmakers don’t see Penn State as being very competitive in the game, having agreed on an 18.5-point spread. DraftKings and Betway Thursday morning were offering reduced -105 vig on the underdog that would make them better choices than other sites for Penn State backers.

The best moneyline reward for Penn State pulling off an upset is the +700 offered by BetMGM. BetMGM also posts the lowest points total over/under at 60, while the number goes as high as 61.5 at FanDuel.

Though its other opponents’ defenses should not be considered the caliber of Penn State’s, Ohio State has shown it can nearly get to that over/under number all by itself. It has averaged a nation-best 49.3 points per game, with an average of 559.7 yards of offense that is also tops.

And to show just how narrow that 18.5-point spread could be considered despite how big it looks, the Buckeyes have beaten their last four opponents – Akron, Rutgers, Maryland, and Indiana – by a combined score of 231-44.

Ohio State is led offensively by two freshmen, quarterback C.J. Stroud (22 TD passes to 3 interceptions) and running back TreVeyon Henderson (8.8 yards per carry), hoping to take advantage of injuries to Penn State’s defensive line in making the Lions the latest such victim.

The biggest thing Penn State could have going for it is a healthier Sean Clifford at quarterback, whom coach James Franklin said is now healed from an injury against Iowa that also contributed to his struggles last week. The Lions have only scored 13 points in their last six quarters of regulation.

Ohio State has won four straight in the series, including 38-25 last year, and Penn State is 2-12 in Columbus since joining the Big Ten, though several of those have been close losses in the final minutes of play.

No college football analyst back in September would have imagined Pitt (6-1, 3-0 ACC), now ranked 17th, becoming the odds-on favorite to win its conference, especially after a home loss to Western Michigan.

But the biggest reward presently for a Pitt ACC title ticket is the -120 price offered by Betfred. Others make the Panthers, who once had 66/1 odds, an even bigger favorite after soundly beating longtime conference bully Clemson 27-17 at Heinz Field last week.

Now they welcome a Miami squad (3-4, 1-2) that has been disappointing to its fans this year, but also has played tougher competition than Pitt, lost some very close games in conference play, and comes off a 31-30 win over a North Carolina State team that was ranked 18th at the time.

The oddsmakers’ confidence in the Panthers has grown steadily, however, to the point they are favored by 9 to 9.5 points over the Hurricanes. Those offering just the 9, which is better for Pitt bettors, are DraftKings, FOX Bet, Betway, and Kambi-supported sites like BetRivers, Unibet, and TwinSpires.

FOX Bet offers the best moneyline return for a Pitt win at -350. The over/under ranges from 61 (Kambi sites, BetMGM, Caesars, Betfred) to 62, with DraftKings and Betway offering even money (+100) to bet the “over” at that higher number.

A high-scoring game is possible, both because Pitt quarterback Kenny Pickett has had the team’s offense clicking (and steadily improved his Heisman Trophy odds, now as short as 9/1) and Miami has been scoring well itself, averaging 33.7 points in its three ACC games.

Due to the injury to their original starting quarterback, the Hurricanes are using freshman Tyler Van Dyke, who has been improving to the point that he threw for 325 yards and four TDs, with no interceptions, versus the Wolfpack last week.

Temple looks to rebound at home

Though the two meet at Lincoln Financial Field, most betting sites list the Owls as 10.5-point underdogs, but some go to even 11 (FOX Bet, Caesars), making them better options for Temple backers.

FanDuel and Caesars offer the best moneyline return on Temple at +340. The over/under is generally 52, but FanDuel and the Kambi sites (such as BetRivers) post 51.5, with a bit of increased juice on the over.

If the game turns into a ground assault by the Knights, no one should be shocked. Temple gave up 421 rushing yards to South Florida and UCF has been averaging 207.1 yards rushing, using a 1-2 punch of power back Isaiah Bowser (26 carries for 111 yards against Memphis) and speedy little Johnny Richardson (6.3 yards per carry on the season).