Seasons Went In Different Directions, But Pitt, Penn State Both Favored In Bowls

State schools look to finish on high notes vs. Michigan State in Peach Bowl and Arkansas in Outback 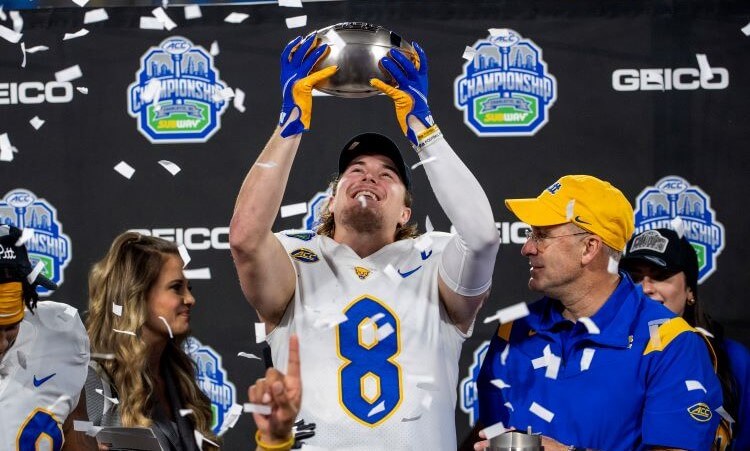 One Pennsylvania college football team has already had its best season in decades and another struggled after having similar aspirations, and now they are both favored by about 3 to 4 points in their bowl games.

After winning its first ACC title with a convincing 45-21 win over Wake Forest Saturday night, Pitt learned the next day that it would face Michigan State in the Chick-fil-A Peach Bowl in Atlanta on Dec. 30. Penn State, whose last game was a 30-27 loss to that same Michigan State team, will play Arkansas Jan. 1 in the Outback Bowl in Tampa.

Plenty could change over the next three weeks — especially if key players opt not to play in the games to protect themselves from potential injury that could jeopardize their NFL draft status — but Pennsylvania’s online sportsbooks have posted early lines on the two games for those wanting to get in early bets. By the time the games are played, many of the sites will probably also offer special promos, so it’d by good to check the sportsbooks again in late December even if you place a bet now.

The Pitt-Michigan State contest is expected to be a high-scoring affair involving offenses that include one of the nation’s top quarterbacks in Kenny Pickett and one of the premier running backs in the Spartans’ Kenneth Walker III.

Pitt stood Monday morning as a 4.5-point favorite at BetRivers (and other Kambi-backed sites, including Unibet and TwinSpires). FanDuel and DraftKings had the Panthers favored by 4, while BetMGM was actually the best place for a Pitt backer by laying just 3.5 points.

BetRivers and BetMGM offered a moneyline price on a Panthers victory of -175. Those two sites had the lowest points total over/under at 62.5, while DraftKings placed it up at 64.

It might be a mild surprise that Pitt (11-2) is favored, given that the Spartans (10-2) finished with a higher College Football Playoff ranking — 10th compared to Pitt’s 12th. It probably has to do with Pitt finishing stronger — five straight wins, including that beat-down of the Demon Deacons — while MSU suffered a late-season 56-7 thrashing by Ohio State after also losing to Purdue.

Both teams’ seasons were much better than expected, however. Michigan State went just 2-5 in 2020 in coach Mel Tucker’s first year, and a Pitt bettor could get odds as high as 66/1 before the season from BetMGM for the Panthers to win the ACC.

While Pickett (4,319 passing yards and 42 TDs) and Walker (1,636 rushing yards, 18 TDs) get the attention on the field, there’s an interesting sidelines subplot in Pat Narduzzi having taken the job as Pitt’s coach seven years ago after having spent eight years at Michigan State coaching defense under Mark Dantonio. He will try to have the Panthers beat the Spartans for the first time, as Michigan State is 6-0-1 all-time in the series.

The Nittany Lions had hopes for higher postseason status back when they were undefeated and ranked No. 4 nationally before a loss at Iowa. After finishing the season 7-5, they are still favored by about a field goal to beat surprising Arkansas (8-4), playing in its first bowl game since 2016.

The Kambi sites offered the best early point spread for a Penn State bettor at just 2.5, while the line went as high as 3.5 points at BetMGM. Kambi sites like BetRivers also had the best PSU moneyline price at -143. The over/under has mostly been set at 45.5, but FanDuel posted 46.

Arkansas, ranked 22nd in the latest AP poll, likes to run more than most teams, averaging 217.3 rushing yards per game. It had a solid SEC season in which it had nothing to feel ashamed about in four losses to Alabama, Georgia, Mississippi, and Auburn. That ‘Bama loss was by just 42-35 on Nov. 20.

The New Year’s Day game will be a chance for Penn State to end the season on a positive note after dropping five of its final seven games. If he opts to play in the game, wide receiver Jahan Dotson (91 receptions, 1,182 yards, 12 TDs) can further cement his legacy as a Penn State receiving great before becoming a high NFL draft choice.

The Lions have a 3-1 record in prior Outback Bowl appearances. It is their first meeting ever against the Razorbacks.