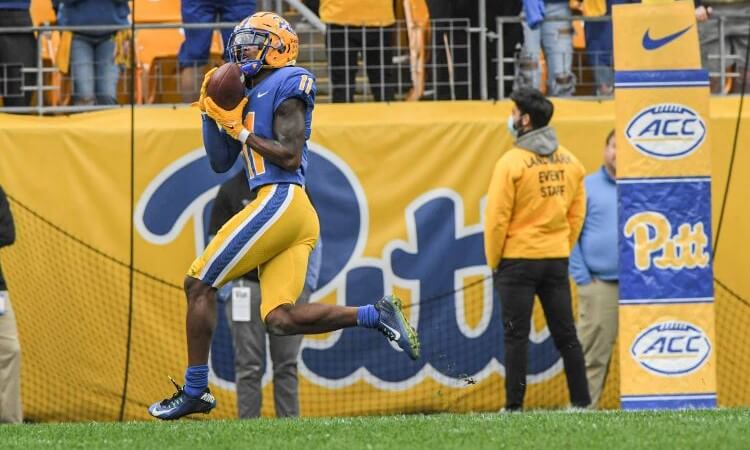 Pitt gets another chance to flex its muscles on national TV Thursday night, hosting North Carolina while favored by a touchdown to continue rolling toward a possible first ACC title for the program.

The Panthers’ 7:30 p.m. contest on ESPN kicks off a weekend of action for the Pennsylvania schools that will feature another highlight at noon Saturday in an even matchup of Penn State and Michigan in Happy Valley.

A little less attention may be paid to Temple when it hosts Houston Saturday, considering all of the key indicators — including the odds from Pennsylvania’s online sportsbooks — suggest the Owls are likely to suffer their third consecutive blowout.

Favored in the conference and the game

Pitt (7-2 overall, 4-1 ACC) is ranked 25th by the AP but remains ahead of everyone else in odds to win the conference. The best return on the Panthers to become champion in December is the +175 offered by BetRivers, Unibet, TwinSpires, and other sites using Kambi odds, as others have them an even bigger favorite. Wake Forest is behind at +225 on Kambi-supplied sites, even though the Demon Deacons have just one loss and are ranked higher.

It would help the Panthers get to the title game as the Coastal Division’s representative if they can outscore the Tar Heels in what is expected to be a super-charged affair.

The oddsmakers have it listed as the highest point total over/under on the entire NCAA slate this week, with BetMGM joining the Kambi sites in going all the way to 73.5. The lowest number (using odds posted Wednesday night) is the 72.5 from Caesars and FanDuel, with the latter applying some extra juice at -115 to take the over.

The various sites have Pitt as either a 6.5- or 7-point favorite, with a Pitt backer best off using the 6.5 from Caesars, which applied no extra vig to taking the Panthers, unlike FanDuel, DraftKings, BetMGM, Betfred, and Betway.

BetMGM is offering the best moneyline return for a Pitt victory, at -225.

The Panthers are coming off a sound 54-29 beating of Duke, led by another 416 passing yards with three TD tosses from Kenny Pickett, to get their mojo back after being upset by Miami.

North Carolina (5-4, 3-3) has followed a good week-bad week pattern since mid-September, with last Saturday being one of the upside weeks. The Tar Heels surprised Wake Forest 58-55 to hand the Demon Deacons their only loss.

UNC showed off its powerful running attack, with running back Ty Chandler getting 213 yards and four TDs and quarterback Sam Howell adding another 104 rushing yards and finding the end zone twice himself. There’s no question the Tar Heels can score, as they average the 11th most points per game across Division I.

It just so happens, however, that Pitt has the nation’s No. 1 scoring offense, along with one of top defenses in the nation against the run, limiting opponents to 107 yards. Hence, that touchdown spread favoring Pitt to take one more step forward.

Penn State’s biggest hopes for the year were sidelined by a three-game losing streak, but that ended Saturday with a 31-14 win at Maryland. The Nittany Lions (6-3, 3-3, ranked No. 23 AP) can bolster their self-esteem quite a bit by derailing Michigan’s season this week.

The 9th-ranked Wolverines (8-1, 5-1) would be undefeated if not for a close and controversial loss at Michigan State two weeks ago, from which they rebounded to beat Indiana 29-7.

The game features two strong teams deemed to have more prowess on offense than defense, and the home-field advantage of a packed Beaver Stadium helps offset the superior record Michigan brings into the game.

The matchup is so even that the Kambi sites list the game as pick ‘em, while others are giving the Lions 1 to 1.5 points. A Penn State bettor may thus opt for the 1.5 being given by FOX Bet, Betfred, or FanDuel. On the moneyline, however, the +105 from DraftKings and Betway was the best number Wednesday night.

Most sites set the over/under at 48.5, with BetRivers and the other Kambi sites dipping a bit lower to 48.

While Michigan leans more toward a rushing attack, averaging 234.1 yards per game, the Nittany Lions have shown no ability to do that. Fortunately for coach James Franklin, quarterback Sean Clifford last week looked healed finally from his Iowa injury by throwing for 363 yards and three touchdowns against Maryland.

In Penn State’s favor, possibly, is that Michigan has lost on its last two visits to State College under college Jim Harbaugh, and it’s a time of year when the Wolverines might already be looking ahead toward their regular season finale with their more hated rival, Ohio State.

Can you spell blowout — again — for Temple?

One might forgive the AAC-leading Houston Cougars (8-1, 6-0) for anticipating something of a luncheon feast at Lincoln Financial Field at noon. The visitors have won every game since a season-opening loss to Texas Tech, and that includes beating South Florida 54-42 last week.

The oddsmakers certainly see a lopsided affair in the cards, with Temple as much as a 25.5-point favorite for those using BetMGM. FOX Bet is offering +1400 on the moneyline for an unlikely Owls victory.

The over/under ranges from 53.5 at Kambi sites to 54.5 at FanDuel and DraftKings.

The basic narrative here is that Houston is averaging 39.1 points per game and Temple gives up 36.8 on average. In addition, Houston’s defense ranks near the top nationally in many categories and Temple’s offense ranks among the bottom.

Statistics can certainly lie. It’s hard, however, to fault any analyst who predicts Houston handling the Owls just as roughly as Cincinnati, UCF, and East Carolina did before them.