The Panthers have one of the best offenses in the nation, but so does Wake Forest 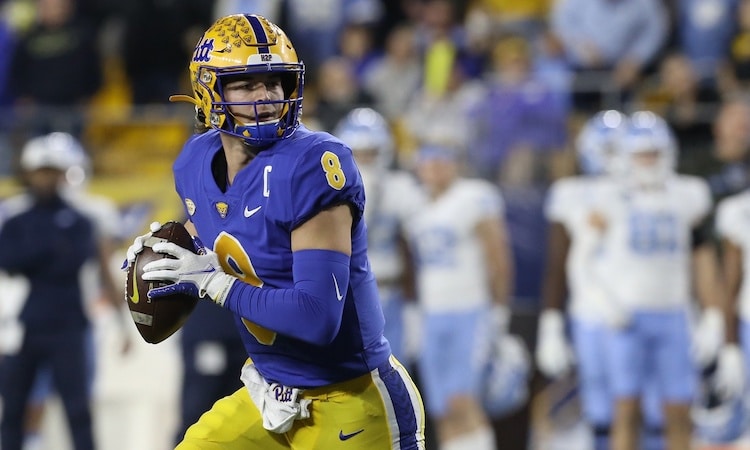 With Clemson’s stranglehold on the ACC loosened, at least for now, a unique opportunity has been presented to the University of Pittsburgh in the ACC Championship Game on Saturday at Bank of America Stadium in Charlotte, N.C.

The Panthers are supposed to win.

Pitt has participated in the conference title game once before, back in 2018, during Clemson’s run of six straight ACC titles, but the Panthers were a 28-point underdog and got summarily crushed. This season, No. 15 Pitt, the representative of the ACC’s Coastal Division, will face No. 16 Wake Forest, which won the Atlantic Division.

The Panthers are favored by a field goal at nearly every online sportsbook in Pennsylvania, but if you like Wake Forest, you can snag 3.5 points at FanDuel.

The Demon Deacons have one ACC title on their résumé since the conference split into two divisions in 2005. That title came in 2006, when Wake Forest edged Georgia Tech, 9-6, in a Jacksonville rainstorm.

Is Pitt a deserving favorite in Wake’s home state?

Pitt has come a long way since an early season loss to Western Michigan, which finished its season 7-5 overall and 4-4 in MAC play. Despite that loss, and another to Miami on Oct. 30, the Panthers have been favored in every game this season and are 9-3 against the spread. That may speak most to the overall quality of the ACC this season, but it is notable in the context of the conference title game because Wake Forest is 1-2 straight up and ATS as an underdog this season, including a 48-27 loss to Clemson two weeks ago.

Quarterback Kenny Pickett, the ACC Player of the Year who holds several passing records at the school, has been the star for the Panthers all season. With more than 4,000 passing yards, 40 touchdown passes, and just seven interceptions, Pickett still has an outside shot to win the Heisman Trophy (he is the +1800 fourth choice to win the award, behind Bryce Young, C.J. Stroud, and Aidan Hutchinson at BetMGM), and he’ll face a Wake squad that ranks 91st in scoring defense nationally and 100th in total defense, but 50th in passing yards allowed.

Fan vote for this year's award will help select the four finalists and winner.

Help @KennyPickett10 get to New York!

Although Pickett could very well have a massive night throwing it around Bank of America Stadium, the Pitt running back tandem of Vincent Davis and Rodney Hammond Jr. could also be in for a career effort. The Wake Forest defense ranks 118th against the run nationally and allowed a staggering 333 yards on the ground against Clemson.

Wake Forest is no slouch on offense, either

The Demon Deacons have a quality quarterback of their own in Sam Hartman (3,711 yards, 34 touchdowns, 10 interceptions), and their offense has averaged 42.9 points per game, which ranks third in the nation, just ahead of Pitt (42.8).

Sam Hartman tosses his 34th TD of the season, becoming just the 9th player in #ACCFootball history to reach that mark! 🎩@WakeFB | @sam_hartman10

But Pitt’s defense has performed significantly better against comparable competition. While Clemson ran at will on Wake Forest, the Panthers held the Tigers to just 17 points and won the game. There was very little defensive resistance in the Wake Forest-North Carolina matchup (a 58-55 Wake loss), while Pitt held the Tar Heels to 23 points in an overtime win for the Panthers.

What about the total?

With two-high powered offenses, it’s no surprise to see the total for the ACC Championship Game around 72.

If you’re looking for an edge in either direction, you can get 71.5 at FanDuel, FOX Bet, DraftKings, or Caesars, while the highest total, 72.5, can only be found at BetMGM.

Jeremy Balan has been a journalist, editor, and sports writer since 2007. After years covering prep, college, and pro sports for online and print media, he focused on turf writing at BloodHorse from 2015-2019 and won an Eclipse Award for his coverage of the devastating fire at San Luis Rey Training Center. Contact Jeremy on Twitter (@jeremybalan) or through email at jbalan@bettercollective.com.

Jeremy Balan has been a journalist, editor, and sports writer since 2007. After years covering prep, college, and pro sports for online and print media, he focused on turf writing at BloodHorse from 2015-2019 and won an Eclipse Award for his coverage of the devastating fire at San Luis Rey Training Center. Contact Jeremy on Twitter (@jeremybalan) or through email at jbalan@bettercollective.com.