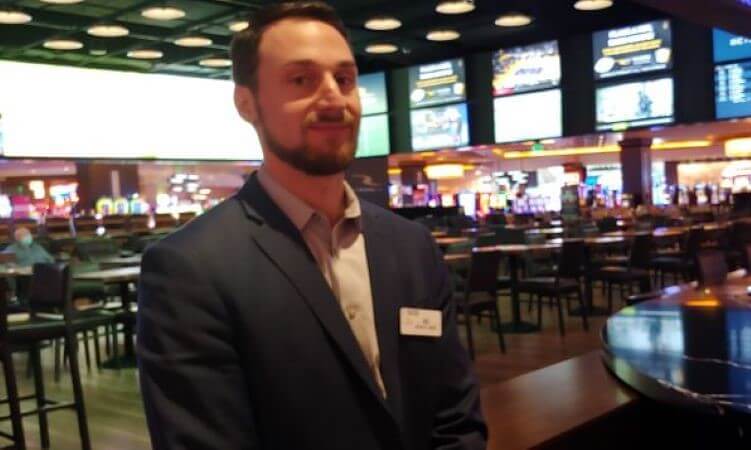 Max Schmerin, sportsbook manager at the Pittsburgh Rivers Casino, didn’t grow up as some young version of a Las Vegas wise guy studying game odds, betting his allowance, and sweating out the outcome of the latest chapter of the Steelers-Ravens rivalry.

The 30-year-old native Pittsburgher was a middle-class kid who excelled at tennis, rode it to a college scholarship, and fell afterward into the casino business — and the growing sports betting industry — because it was something new and interesting and he didn’t know what else to pursue.

But now Schmerin is not only running the busiest of Pennsylvania’s 17 retail sportsbooks, he’s pretty good at handicapping sports — at least when it comes to NFL football.

He just beat out 51 sportsbook management peers nationally in the Bookies Battle contest of Gaming Today, in which they pick every NFL game against the spread throughout the season, with their predictions and results publicized for all to see.

He beat the house, if he were actually betting

With a 12-3 record in Week 18, Schmerin leapfrogged from second place to finish 156-111, with a 58% winning percentage well ahead of the classic 52.4% threshold a sports bettor needs in order to beat the vig in the industry.

He would have made a lot more money if he were betting part of his paycheck on every game all season instead of simply claiming the $3,000 given to the contest winner, but that doesn’t trouble him.

“I would have had a profitable year. Would that have been nice? It would have been fantastic, but I don’t know that the stress that comes with it would have been worth it to me,” Schmerin said in an interview in his sportsbook located walking distance from Heinz Field.

He is not permitted to place bets at his own sportsbook or through the BetRivers app that is under the same Rush Street Gaming umbrella as his own casino, but he said he occasionally wagers small amounts with some of the state’s other online sportsbooks. They’re often futures bets just to make things fun for him to follow throughout a season.

“I don’t gamble often. I’ve always been someone who doesn’t enjoy winning 20 bucks as much as I hate losing 20 dollars.”

The oddsmaking is in others’ hands

Schmerin is not an oddsmaker in the sense of the well-known figures in the U.S. industry who have long been staples quoted in Las Vegas, including those like Jimmy Vaccaro, Art Manteris, and Chris Andrews, who themselves all hailed from the Steel City.

The odds for Rivers Casino, as well as its sister Rivers property in Philadelphia and the digital BetRivers of Rush Street Interactive, come through Kambi. It’s a longtime European firm that also supplies odds for numerous other Pennsylvania retail and online sportsbooks, including Parx, Unibet, TwinSpires, and Penn National Gaming’s Barstool site.

Each operator has latitude to adjust Kambi’s odds, but Schmerin said that’s rare at Rivers.

“Kambi is on the ball with all that — we typically go with Kambi’s advice,” he said.

The adjustments are seldom even though Pittsburghers typically load up in action on their favorite teams. It’s not uncommon for volume at the retail sportsbook on a Steelers or Penguins game (but not the Pirates) to be tilted 75% in favor of the home team, but even then, Rivers doesn’t look to balance things out. It doesn’t want to be out of line with the other sportsbooks and open itself up to arbitrage bettors, nor does the imbalanced action keep Schmerin from rooting as a fan for Pittsburgh teams.

A lot of traffic comes through the sportsbook on weekends, betting at the counter or using one of its 33 self-service kiosks or occupying one of nearly 200 chairs to watch games on any of its 28 wall TVs. The visitors’ wagers added up to more than $9 million in monthly handle for Rivers in both October and November, just ahead of its closest competitors — Rivers Philadelphia and Parx.

Those customers also have the option of betting online, which is how more than 90% of the wagering is done in Pennsylvania, but Schmerin said there’s nothing like the excitement of a crowded sportsbook where you’re cheering for an outcome with a hundred other like-minded people.

“This is now something more socially acceptable as a form of entertainment,” he noted. “Every Saturday and Sunday in football season it’s hard to find an empty seat in here,” and it’s the same for pay-per-view boxing and UFC events.

And some of those people this fall took note of Schmerin’s success with his weekly picks that were posted online and would seek out his advice. He would point them to the posted picks, as he’s wary of having anyone on his staff of 15 take a role in bettors’ decisions.

“The customer should be the one solely responsible for who they’re betting. They’re allowed to ask for opinions, but I never want to steer someone else in a direction they don’t want to go,” he said. “I think each customer feels working in a sportsbook, you know something more than they do, but really, you don’t. There’s really anything that can happen in any given game on any given day. Some days [someone working behind the counter] might get lucky and win a few, and some days they can get crushed.”

But Schmerin, who has run the casino’s sportsbook for two years after switching from being a slots supervisor, didn’t get crushed in his third year in the Bookies Battle. He did very well in his rookie year without being at the top, then was just average in 2020. But this year he beat dozens of others who should know just as much as him, if not more, including some industry notables like Las Vegas South Point’s Chris Andrews and Jay Rood from Bet.Works.

“Usually, I looked at home teams that were getting something like a field goal [as underdogs], especially in divisional games,” he explained. “And lots of times I liked bigger divisional dogs — like plus 7, or plus 8 or 9. Those teams are playing each other twice a year, and it’s hard to win in the NFL by 10 or more points.”

If a game lacked those factors, he would just try to study how something occurring on one Sunday might affect the next week’s games, “a gut sort of thing.”

“You’re not going to be perfect, and there’s a lot of parity, too,” Schmerin noted. “Whatever seems to be easy, I usually pick the other way. A lot of stuff that seems too good to be true, it usually is in the sports world.”

So now, he’s in an extension of the Bookies Battle, as the top 10 finishers from the regular season compete for a $1,000 prize by picking playoff games. Selections from Schmerin and the rest will go up online on Thursday, though he’s not really interested in being a tout for others to follow.

Despite his success, he said his goal is to someday manage an entire casino, not to become a professional handicapper.

“At this point, I’m not looking for supplemental income or to make a living from it,” he said. “It’s more like let’s just have fun with it — let’s not turn it into a job.”