Monday’s two-city telecast will be first of its kind 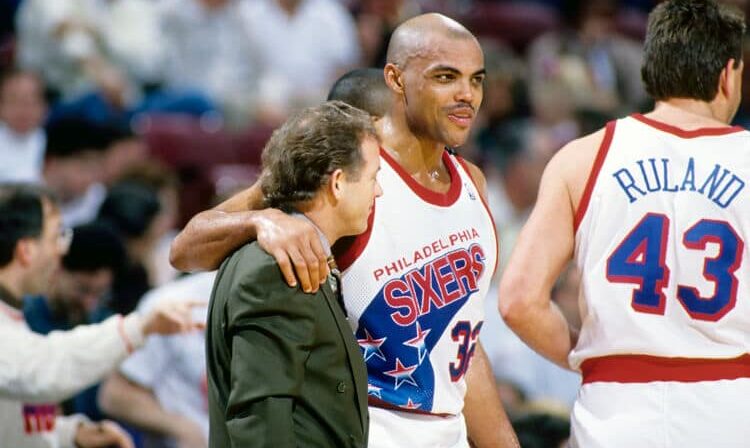 Jim Lynam had his best year as a head coach with the Philadelphia 76ers during the 1989-1990 season. Charles Barkley, in full “Round Mound of Rebound” mode, enjoyed one of his finest campaigns, shooting 60% from the field en route to scoring 25 points per game.

Philly’s starting backcourt featured a Dawkins (Johnny) and a Hawkins (Hersey), with a 7-foot George Michael lookalike (Mike Gminski) manning the middle. He was backed up by a central casting white stiff named Kurt Nimphius, who did not look like George Michael.

Kendall Gill was a senior at the University of Illinois that season, pacing the Fighting Illini with 20 points per game. The smooth-moving shooting guard would soon become a lottery pick for the Charlotte Hornets, making stops in Seattle (now Oklahoma City) and New Jersey (now Brooklyn) before landing with the Bulls in the second-to-last season of his 15-year career.

So what do Lynam and Gill have to do with one another? They’ll each be part of PointsBet’s first dual-market sports betting telecast, of Monday’s Sixers-Bulls game, on NBC Sports Philadelphia Plus, where Lynam is now employed, and NBC Sports Chicago Plus, where Gill currently hangs his hat (or sneakers, anyway).

A broadcast for bettors

PointsBet’s BetCast is essentially a live telecast of a game that’s geared toward sports bettors. To this end, the broadcast will feature live odds — including the spread, over/under, and a moving moneyline — along with futures and props, and a special version of Matt Bernier and Drew Dinsick’s Bet the EDGE GameTime podcast will function as the pregame show.

Lynam and Gill will be joined on the in-game telecast by Sara Perlman of NBC Sports EDGE and PointsBet’s head oddsmaker, Jay Croucher. Meanwhile, traditional broadcasts will air on NBC Sports Chicago and NBC Sports Philadelphia.

“The Chicago Bulls vs. Philadelphia 76ers matchup could not come at a better time with in-person registration for mobile betting in Illinois coming to an end just days before,” said PointsBet Chief Marketing Officer Kyle Christensen. “With this type of access, PointsBet is undoubtedly the home for live, in-game betting. … It highlights how we aim to elevate the sports viewing and betting experience.”