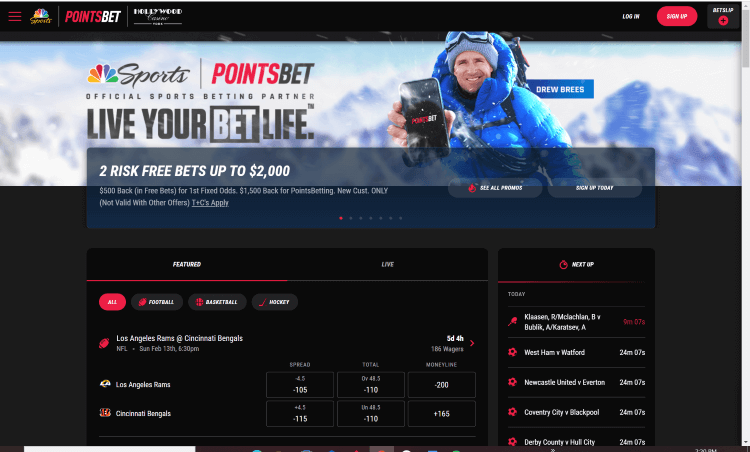 Pennsylvania’s 14th online sportsbook has arrived this week, and none too soon for PointsBet.

The Australian-based sportsbook is in the midst of a three-day, real-money test period by smartphone app and computer with intent to be live permanently sometime Thursday. That would be three days before the Super Bowl, which is always the biggest sports betting event of the year.

PointsBet, which received licensing approval from the Pennsylvania Gaming Control Board last month, gained access to the state through a partnership with Penn National Gaming and the interactive sports betting license belonging to PNG’s Hollywood Casino York.

The test launch under gaming board monitoring began during limited hours Monday and continues from 2 p.m. to midnight Tuesday and noon to midnight Wednesday.

The online sportsbook is not accompanied at the outset by PointsBet’s iCasino platform. The company did not provide comment to Penn Bets about when that is coming or make any announcement regarding its Pennsylvania sportsbook launch. That is not necessarily unusual, as many operators prefer to use the test period to work out any kinks before wanting publicity that would drive a large volume of customers to the site.

Lots of competition but certain assets

As the first online sportsbook to enter a crowded field since Betway in June, PointsBet could be challenged to stand out among better-known, more widely advertised competitors such as FanDuel, DraftKings, and BetMGM. Collectively, those three and Penn National’s Barstool Sportsbook handle about 85% of the online betting volume in the state.

PointsBet will be aided, however, by prominence it already has in the Philadelphia region as the official sports betting partner of NBC Sports Philadelphia. During game telecasts of the city’s pro teams, references to betting odds on the contests always credit PointsBet.

The site also attracts some customers through its unique option known as PointsBetting, in which the size of bettors’ wins and losses can grow according to a bet’s margin of victory, as opposed to the traditional set amount depending on the outcome.

To attract deposits and play from new customers at pa.pointsbet.com, the site advertises several offers:

PointsBet is also offering customers a free $20 live bet during the Super Bowl if they make a pre-game bet on it of $20 or more.

The sites’s odds for Sunday’s game as of Tuesday afternoon showed the Los Angeles Rams as a 4.5-point favorite, with the vig at -105 for taking the Rams and -115 for picking the Cincinnati Bengals. The moneyline for the Rams was -200 and for the Bengals was +165, with the over/under set at 48.5.

The company’s Pennsylvania launch comes on the heels of a more ballyhooed one by PointsBet in New York on Jan. 24, where it is one of seven operators in a new market that dwarfs Pennsylvania’s in size. The sportsbook is also live in New Jersey, Iowa, Indiana, Illinois, Colorado, Michigan, West Virginia, and Virginia.