The Division 1 football programs can all be better, though odds are against them winning any titles 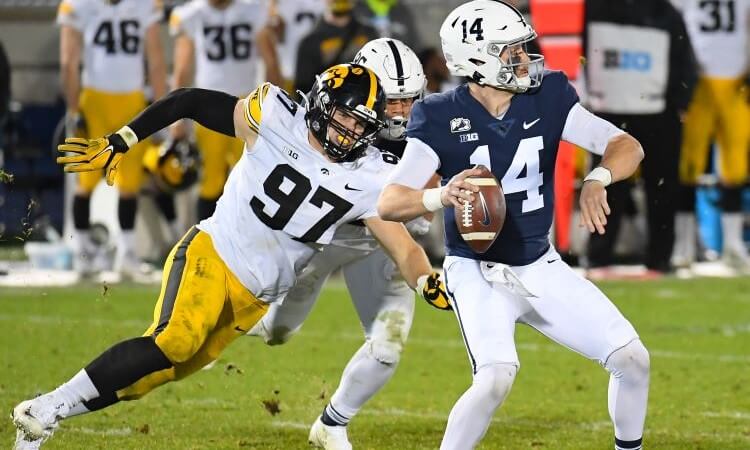 Most fans of Pennsylvania’s major college football teams would be happy to forget 2020, and that includes those who put their money where their hearts are in betting on them.

In a season that was disrupted and shortened by COVID, and with fans unable to attend games, Penn State started 0-5 on the way to its worst season in decades. Pitt took longer to disappoint backers, but a four-game midseason losing streak mired it in more of that program’s recent mediocrity. Temple, meanwhile, won but a single game.

The three Division 1 programs start the 2021 season this week with a clean slate and higher hopes, though it won’t take much for any of them to show improvement. None is favored to win its conference or division — let alone make it to a College Football Playoff game in January — but in the case of Penn State and Pitt, there’s enough returning talent to make bets on them tempting.

That’s on both a weekly basis and on the futures options being offered on them by the 13 legal online sportsbooks operating in the state. Here’s the rundown on the three schools:

Penn State had gone 11-2 with a Cotton Bowl win in 2019 and returned starting quarterback Sean Clifford last year, leading to high hopes and a preseason Top 10 ranking. Then, incredibly, the Nittany Lions lost their first five games before righting the ship to finish 4-5.

Now, again with Clifford behind center, the Nittany Lions are ranked 19th nationally, but face their toughest opening game in many years by visiting 12th-ranked Wisconsin at noon Eastern Time on Saturday. The marquee matchup will attract a lot of national attention, and it is just the start of a tough schedule for Penn State that also includes a non-conference game with Auburn.

Clifford has a new offensive coordinator to help him in Mike Yurcich and is assisted by the return of one of the nation’s top receivers in Jahan Dotson (52 receptions, 884 yards, 8 TDs last year). Furthermore, Coach James Franklin boasts an offensive line  that’s as good as he’s ever had, and Penn State’s defense is perennially strong, anchored this year by a particularly impressive secondary.

Still, there’s that bad aftertaste from last year’s start while facing a Wisconsin team that returns its own highly touted quarterback, Graham Mertz. Even with Penn State having won the last four meetings between the Big Ten powerhouses, the sportsbooks are making the Badgers a home favorite by nearly a touchdown.

Most of the sites favor Wisconsin by 5.5 points, and BetMGM has the spread at just 5, leaving FOX Bet the best site for a Penn State backer by giving the Nittany Lions 6 points. The best moneyline return, however, comes from Caesars, which has the Lions +190.

The points total over/under is either 50 (DraftKings, BetMGM, Caesars) or 50.5 (FanDuel, FOX Bet, Kambi-backed sites that include BetRivers, PlaySugarHouse, Unibet, Barstool, and Parx).

Ohio State is once again a strong favorite (-200 to -230) to win the Big Ten, with 10/1 odds from FOX Bet and the Kambi sites offering the best return for a Penn State believer.

You could get as much as 80/1 (FanDuel, BetMGM, Kambi) on the Nittany Lions to claim the national title, but betting on their season wins projection would be a more realistic option. The Kambi sites and FanDuel offer +125 for them to win more than nine regular season games, while BetMGM offers an over of 8.5 wins with an increased vig of -120.

Pitt has won eight games in half of coach Pat Narduzzi’s six seasons, but never more than that, and the oddsmakers figure the program will be neither considerably up or down from its usual performance in 2021.

Fifth-year senior Kenny Pickett is back at quarterback as one of the most experienced signal-callers in the country, having already made 36 starts. He and a dozen other players are “super seniors,” meaning they took advantage of the chance to return because last year’s COVID-marred season did not count against their NCAA eligibility.

So the Panthers have experience on their side at many positions and, like Penn State, they have a returning star at wide receiver in Jordan Addison (60 receptions as a freshman). It’s uncertain if Pitt has improved upon a running game that has been lackluster the past two years, however, and a talented defense lost about half of its complement to the NFL.

The good news for Pitt fans is the team’s first four games are against Massachusetts, Tennessee, Western Michigan, and New Hampshire, offering the tantalizing possibility of a 4-0 record before ACC play begins. And if the Panthers somehow build momentum, their three toughest conference games — against Clemson, Miami, and North Carolina – are all at home. Those contests come in a 19-day span from Oct. 23-Nov. 11, and are likely to determine if Pitt can take any step forward from its consistently middle-of-the-pack performance this century.

Suffice to say things will get more challenging after Saturday’s Heinz Field opener vs. Massachusetts, for which the Panthers are favored by anywhere from 37.5 points (FanDuel, FOX Bet) to 38.5 (BetRivers, Unibet and the rest using Kambi). The over/under on the game is as high as the 57 from Caesars and as low as 55.5 from Kambi sites.

Clemson is heavily favored to win the ACC once more, with Pitt listed as a longshot of as much as 66/1 by BetMGM and Kambi. Most sites have Pitt’s o/u on regular season wins at 7, but with extra juice on the over in all cases. FOX Bet would be best for a Pitt backer, at -125 for betting over 7. DraftKings puts the o/u at 7.5, with -120 for betting the over, +110 for the under.

Things seemingly can’t get any worse for Temple

Despite coming off a solid 8-5 season in 2019, last year was a disaster in every conceivable way for Temple. The program and players were more impacted by COVID than most others, and the 1-6 season only got worse instead of better at the end, as the Owls finished no closer than 24 points in any of their last four games.

The oddsmakers and American Athletic Conference projections don’t see coach Rod Carey as able to make much headway this year in a season that starts with a visit to former rival Rutgers at 6:30 p.m. Thursday. Carey will be counting on 11 transfers to join 11 returning starters in restoring the program to respectability. The most notable of those transfers is starting quarterback D’Wan Mathis, who began last season as Georgia’s starter as a redshirt freshman before being benched due to a slow start. He’s a dual-option threat who should almost certainly be able to improve upon the performance of five different quarterbacks who were thrust into action for the Owls last year.

Temple plays out of conference at Rutgers and Akron, and then hosts Boston College and Wagner before starting in the AAC.

Most betting sites list the Owls as a 14-point underdog in the opener vs. the Scarlet Knights, though FanDuel and BetMGM give them 14.5 with extra vig. The best moneyline return for an upset is the +500 from BetMGM. Most sportsbooks list the points o/u at 51.5.

While odds are 200/1 or longer for Temple to win a conference where Cincinnati is the favorite, the over/under on season wins is just 3 from DraftKings, FOX Bet, and BetMGM. It’s even less at 2.5 from FanDuel and the Kambi sites, but with heavy vig of -159 from Kambi and -180 from FanDuel.