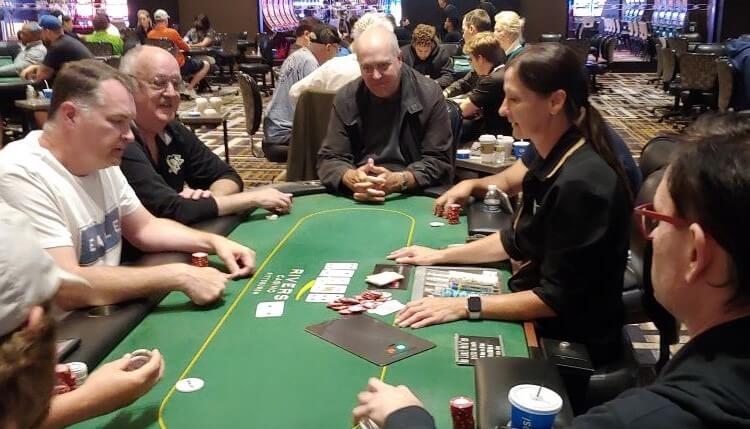 Scott Vinnacombe understands poker better than your average player. He’s a dealer, after all, in Wind Creek Bethlehem’s poker room, in addition to playing serious cash games elsewhere with hopes of besting other competitors in Texas hold ‘em.

But seated at a table with six other players on a Tuesday night in the Rivers Casino poker room in Pittsburgh, he was hoping to lose a hand — and lose big. He had driven 4 ½ hours across the state from his Luzerne County home, regardless of gasoline costs, while dreaming of the scenario.

The reason: The casino is offering the biggest reported “bad beat” poker jackpot in U.S. history, now standing at $1,082,547.66 as of Wednesday morning. Penn Bets wrote early this month about how the prize had reached the $1 million threshold. Last Friday, it surpassed the prior known record for such an award — $1,068,590 given out to six players on Jan. 16, 2018, at Detroit’s Motor City Casino.

Is anybody interested in taking a road trip to Pittsburgh to spend an outrageous amount of time in the Rivers Casino poker room trying to hit the bad beat? https://t.co/cWUxqvndFT

Based on tough criteria of a hold ‘em player needing to lose a hand in which he has quad 10s or better, the prize amount keeps growing by more than $1,000 daily, based on the promotional rake taken from every hand.

It grew another $1,720.68 Tuesday, because neither Vinnacombe nor any of the 100-plus other players showing up throughout the day ended up in any showdown with the necessary qualifying hands. Vinnacombe and the rest know the odds are long — “astronomical, I’m certain,” he said — but it doesn’t keep them from thinking about it every time they sit down at a table.

“I play anyway at home, so I figured I might as well play somewhere where there’s a big money pot,” said the 47-year-old. “All the places near me have bad beats, but not anywhere near this much.”

Rivers wanted something to grow big

Most casino poker rooms have some version of a bad beat jackpot to add another element of high-reward gambling, with each venue applying its own rules for a payoff, and thus the monetary size varying greatly from room to room. When the Rivers poker room began a new jackpot on March 1, 2021 —  months after return from a COVID shutdown — poker manager Leslie Brittain sought to add the excitement of a potentially high jackpot by setting an unusually high requirement.

The two players in a showdown each must have a hand of quad 10s or better — potentially a straight or royal flush in addition to a high four-of-a-kind. No one has given precise odds for such an event occurring, due to variables involved, but based on various estimates, it is almost certainly more than a million-to-one longshot on any given hand, and probably more than two-million-to-one.

Somewhat surprisingly then, the bad beat hit within six weeks. When one player’s quad kings were beaten by another’s royal flush, players at the table shared $149,417. That was April 14, 2021. In the 440 days since then, in a room where anywhere from five to 20 seven-handed tables are typically filled, with 30 to 35 hands an hour dealt at each table, it has yet to reoccur.

“I absolutely want it to hit soon,” Brittain said Tuesday evening, undoubtedly echoing the thoughts of the 50 players near her at the time. “I want to see that jackpot get awarded, because I think that would create a lot of excitement. … It could be life-changing for the dealer and everybody sitting at the table. This is an opportunity players don’t get often, and it was written to be tough.”

Players and dealers alike say the size of the bad beat has become a frequent topic of conversation at tables where banter about local sports teams or sports betting would typically be the focus.

According to house rules at Rivers, the “loser” of a bad beat receives 40% of the jackpot, the winner of the qualifying hand 30%, and other players at the table — currently five at most, due to seven-handed games — share the other 30%. At the moment, that adds up to $433,019 to the “loser,” $324,764 to his showdown opponent, and at least $64,952 for anyone who mucked his 3-8 unsuited before the flop and watched the rest of the hand unfold with widening eyes and mouth agape.

“I’ll take the table share — it doesn’t matter,” said Christopher Guttman, a 22-year-old college student who said he visits the poker room about twice a week during school breaks, but comes because he loves the game, not because of the long-odds jackpot.

For Lynne White, however, the chance to be part of a historic bad beat is a big draw. She won $5,400 at Rivers previously from a royal flush promotion. This, however, would likely have her in shock or bawling, she said.

“I think it makes it exciting,” said the 62-year-old real estate broker. “It adds mystery and suspense to the game. … Let’s face it, it could be life-changing for an individual, so it’s something to strive for, even if it might change your game a little bit.”

For some players — maybe not the more serious regulars focused on claiming as much from each pot as they can — the bad beat lure means sticking around to call a raise when they might normally fold, or bypassing a big raise of their own in order to keep other players in the hand.

Who, after all, wants to be the one responsible for potentially costing the table a million dollars?

“People definitely hold their breath when you see a flop that has potential,” White said.

Dealer will rely on table’s generosity

It’s not just the players doing a double take on enticing flops, or rapt with attention on the river card when the board shows bad beat potential, such as two high pairs already appearing among the first four community cards.

“We all say we’re gonna deal it — it would be huge,” said Emily Bonacci, who has been a poker dealer at Rivers for five years.

The dealers move around from table to table every half hour, raking a dollar for promotions from every pot up to $30 and another dollar if the pot is above that. From its share of that rake, the bad beat pool gets boosted 30 to 60 cents every hand, with the rest allocated to also build a “mini” bad beat now standing at its own attractive $172,504 and to more modest royal flush and hourly “high hand” giveaways.

The dealers are guaranteed a pittance in wages — $5.50 an hour — while relying for the bulk of their income on tips, which might amount to $30 an hour or more. It’s the same for them from dealing any bad beat: What they receive from it is entirely up to the group of players who are part of the winnings, each of them determining individually how generous to be.

It didn’t happen, of course, but she and other dealers all have stories of being aware that just one specific card on the river — about a 2.5% chance — would have done it when they were dealing. It occurred last week for Max Sandherr, who has been dealing nine years and previously dealt a $330,000 bad beat, from which he said players awarded him $10,000.

“I hear every other week a dealer saying, ‘I had to have just one card to deal it,’” Sandherr, 29, said of the bad beat. “If I were to guess when it was gonna happen, I would say within the next 200K.”

By that, he meant before the jackpot reaches $1.3 million. That could involve many more hands of poker, and a lot more players dreaming and driving long distances like Vinnacombe. Brittain reports some players learning of the record jackpot have been driving in from Canada, others flying in from Long Island, and more will keep coming from longer distances the bigger it gets.

Then again, it could happen tonight, or even as this is being written. And then it reverts to zero and starts building on a daily basis again, just like on the past 440.