Player with pocket aces lost the hand but came out almost $500,000 richer 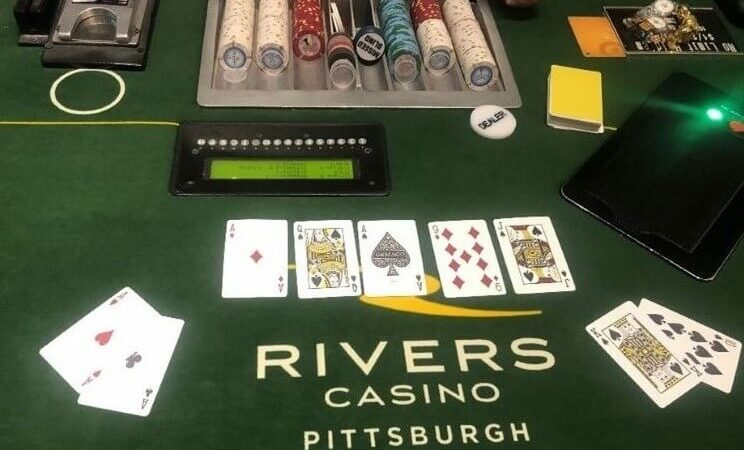 All it took was a poker player with a royal flush beating another with quad aces Thursday for Rivers Casino Pittsburgh to award a $1.2 million “bad beat” jackpot that is the largest ever won in a U.S. casino.

The player with four aces won nearly $500,000 while seven others in a cash game at the $1-$3 Texas hold ’em table shared the rest.

The poker room’s jackpot had been building daily for more than 16 months due to an unusually high requirement that the bad beat could be triggered only if two hands at the table consisted of four 10s or better. The $1,226,765.80 split among eight players was considerably higher than the last time the Rivers bad beat hit, for $149,417 on April 14, 2021.

Many poker rooms in Pennsylvania and elsewhere offer bad beat promotions to help build interest, but each uses its own criteria for the necessary hands. The amount awarded at various casinos thus varies greatly but almost never reaches $1 million. The growth of the jackpot in Pittsburgh had attracted considerable interest in the poker community and drawn players to the 30-table poker room from well beyond western Pennsylvania in recent months, despite the long odds involved in being part of a bad beat table.

A press release from the casino, which is owned by Rush Street Gaming, stated that the bad beat hit at about 4:15 p.m. The player with the “losing” hand of aces, Benjamin Flanagan of Huttonsville, West Virginia, won $490,708. He was dealt pocket aces, and two more aces hit the board as community cards, including the ace of spades.

Raymond Brodersen, from the Pittsburgh suburb of Wexford, was dealt the 10 and king of spades and watched the jack and queen of spades show up as community cards along with the ace. He won $368,029 from the jackpot (as well as winning the hand, likely in the hundreds of dollars from an all-in at a $1-$3 table). Six other players were awarded $61,338 each simply for being seated at the table as the hand played out.

“It’s absolutely thrilling and potentially life-changing for a poker game to pay out at this level,” Andre Barnabei, assistant general manager of the casino, said in the announcement. “When we launch a bad beat jackpot, we have no idea when it will hit or how big it will get. It’s almost as exciting for us as it is for the winners.”

The highest bad beat jackpot previously reported in the U.S. was the $1,068,590 given out to six players at Detroit’s Motor City Casino on Jan. 16, 2018. The Rivers jackpot surpassed that level in late June and kept growing, as a result of a portion of the house “rake” that is taken from each poker hand and devoted to the bad beat.

Meanwhile, the Rivers poker room does still have a “mini bad beat” jackpot that has been building for months and has reached $316,722. Under somewhat easier — though still difficult — criteria to win, two players generally must have hands of quad 2s or better, although a participant with pocket aces can also win with a hand of aces full of kings.