Reopening Casinos Before Racetracks In PA Might Seem A Little Backward

Many states have their racetracks running again before their casinos, but Pennsylvania stands out as the opposite.

Horse handicapper Robert Breit sat Tuesday afternoon in the downstairs race simulcast area of Meadows Racetrack & Casino, where no live racing was able to take place outside while players gambled above him on slot machines and blackjack.

He was betting on horses that were racing in Ohio, where tracks were recently allowed to resume racing — without spectators — while casinos remained closed.

Something seemed a little off about the difference between the two states to the 42-year-old recreational gambler, who used his day off to drive to the Meadows on its first day of operation since mid-March.

“Pennsylvania seems slow on everything,” Breit said, taking a break from the TV monitors showing about a half-dozen different tracks outside of Pennsylvania with afternoon racing.

“My biggest concern about it is the economy, what it’s doing to people’s livelihoods,” said Breit, one of whose friends is a horse owner.

Pennsylvania is not necessarily slow on everything. It began reopening commercial casinos ahead of most states in the Northeast and Midwest.

The Wolf administration has moved southwestern Pennsylvania into the state’s “green” phase of response to the COVID-19 health threat, meaning entertainment facilities could reopen like most business activities, although under certain restrictions.

So the Meadows and Pittsburgh’s Rivers Casino opened the doors to slots and table games players Tuesday for the first time in 12 weeks, and the state’s smallest casino, Lady Luck Nemacolin in Fayette County, plans to do the same at 10 a.m. Friday. 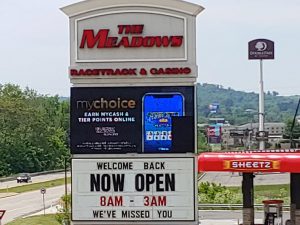 Addressing members of the Pennsylvania Gaming Control Board during their monthly meeting held by phone call Wednesday, board Executive Director Kevin O’Toole labeled the reopenings a success, based on operators’ and patrons’ cooperation with new requirements for facial coverings, social distancing, and extensive cleaning.

“Customers have been very respectful of the new requirements, and accordingly, they’ve been very compliant with those protocols,” O’Toole reported, based on conversations with general managers of the Rivers and Meadows.

Horse owners, breeders, and others with livelihoods connected to the six tracks in Pennsylvania had hoped by now to receive word that racing could resume, providing the purses that sustain them.

That has been a losing ticket thus far.

The Pennsylvania Horse Racing Commission provided information to the state Department of Health June 1 describing health and safety protocols the commission believes could ensure safe racing, based on the guidelines in practice in other states.

There has evidently been some back and forth between the commission and department since then about the protocols, but no approval to green-light racing.

A spokeswoman for the Department of Agriculture, which oversees the commission, said Wednesday there was no new information to share about a timeline or explanation for the delay while neighboring states’ tracks have started running again.

It’s baffling, if not infuriating, to those stymied in the racing industry who cannot make use of a track adjacent to a casino where hundreds of people at a time are again gambling inside.

“It’s just absurd,” said Kim Hankins, executive director of the Meadows Standardbred Owners Association. “You have people now allowed inside an enclosed building, and we can’t perform — even if spectatorless — and earn our money and race our horses as an outdoor sport.”

Public health officials have generally noted that while COVID-19 can still be spread outdoors, the risk is diminished.

Track could be ready within a few days

The Meadows is the only racino in the state to reopen its game floor already, but the possibility exists that the five others could soon get clearance for their indoor spaces to operate.

Whether that’s before or after their racing resumes remains an open question, although an announcement could come any day.

The Meadows would normally be holding afternoon harness races in June on Mondays, Tuesdays, Wednesdays, and Saturdays. Hankins said the track could be ready to operate within a few days of receiving the go-ahead from the Horse Racing Commission, which is awaiting its own go-ahead from state health officials.

Most of the horses that would race are among the 700-plus that are stabled on the track’s backside. The horses have been cared for and worked out throughout the duration of the coronavirus-caused shutdown, and a number have been run in qualifying races over the past week to establish their times that can be advertised for future handicapping purposes.

“You’ve got to be able to show the public what the horses are capable of doing,” Hankins explained.

He said Pennsylvania missed out on an opportunity to get its tracks running ahead of some other states, which would have meant more revenue coming into the state from simulcast wagering.

“Now we’ll be trying to blend in, for lack of a better term, because our governor will not allow us to start up,” Hankins said. “It’s a slow walk — no question that we’re being slow-walked.”

Tough to handicap the wait in PA

Back inside the Meadows racebook Tuesday afternoon, Breit is happy to have the simulcast outlet with its multiple TVs and betting machines available again, though he would prefer to also have the live races right outside the door.

He called horse racing the most challenging form of gambling, but he’s been doing it since he was a teenager and enjoys the experience without risking a lot. He’s among the youngest of the 15 or so handicappers in the racebook on its first afternoon back.

For one race, the fourth at Thistledown near Cleveland, he puts his handicapping hat aside to bet $5 by total chance on a 20/1 shot, Zeke the Streak. It’s simply because the thoroughbred’s name is similar to another horse on which he and friends won a big payoff years ago.

He watches Zeke, the 4 horse, streak to the lead midway through.

It’s a winner also for its jockey, its trainer, its owner, and for a lot of other people connected to horse racing in Ohio.

In Pennsylvania, meanwhile, the wait to get to the starting gate continues.