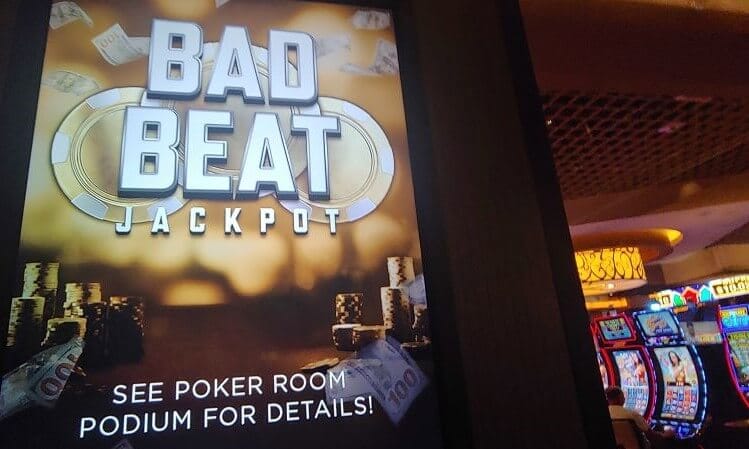 It’s not customary for poker players to travel hundreds of miles to Pittsburgh’s Rivers Casino to play $1-$3 Texas hold ‘em cash games, but its 30-table poker room has lately been receiving calls from as far away as Canada from people wanting to be sure the trip is worth their while.

The reason: a million-dollar “bad beat” jackpot that has the potential this month to become the largest in U.S. casino history.

Before coming, the Canadians and many others — whether a five-minute or five-hour drive from Pittsburgh — check whether two incredibly lucky players (and their incredibly lucky cohorts watching a hand play out at the same table, who would also be rewarded) might have already hit the casino’s main bad beat for the first time since April 14, 2021. It would require a losing hand in a showdown to be quad 10’s or better.

The largest bad beat jackpot ever reported from a U.S. casino’s poker room was $1,068,590 divvied up among six players at Detroit’s Motor City Casino on Jan. 16, 2018. At its current pace of growth, the Rivers prize could surpass that within two to three weeks if it doesn’t hit.

In April 2018, $1.375 million was reportedly won at the Playground Poker Club, a tribal property near Montreal where poker is emphasized more than other gaming and a bad beat (quad 7’s or better, in its case) worth $1,730,774 is currently advertised.

As with other live poker rooms across Pennsylvania and the rest of the country, the one at Rivers Casino was shut down for many months by COVID-19 precautions. It reopened in March 2021, but with many changes from pre-COVID times.

For a spell, it had plexiglass dividers between players, which have since been removed. It reduced the maximum number of seated players from the prior nine, with seven the current limit. And it eliminated its daily tournaments, which have returned to the extent of only one a month.

And one other change — the subject of this article — wasn’t necessarily related to COVID: Prior to the pandemic shutdown, the poker room had discontinued any version of a bad beat jackpot, as there is no requirement that they be provided, and many casinos don’t offer them.

Poker rooms have options for all sorts of promotions, and Rivers, like many others, offers special rewards for royal flushes and “high hands” of the hour or half-hour. Such prizes are one advantage of playing live over the online version of poker available in Pennsylvania, in which operators typically don’t offer such promotions.

When Leslie Brittain took over as manager of the Rivers poker room upon its reopening last year, she also wanted to bring back a bad beat jackpot — one that could potentially be a “life-changing event.”

She and Andre Barnabei, senior vice president of gaming for Rivers Casino, explained in an interview with Penn Bets that the idea of a huge bad beat jackpot can be a big attraction to the average player imagining themselves lucky enough to be part of the hand — or even just sitting at the table — when it hits.

Casinos each have their own criteria for what constitutes a prize-worthy bad beat, as well as their own determination for how the jackpot is shared. The quad 10’s minimum at Rivers is among the toughest of qualifiers. The division of the jackpot is 40% to the “losing” hand (at least $400,000 currently), 30% to the winning hand ($300,000), and 30% shared evenly by others sitting at the table ($60,000 each currently, if a table is full).

For those who may be unfamiliar, Texas hold ‘em involves each player receiving two hole cards and then sharing five community cards on the board. The bad beat requires the players involved to use both their hole cards, so if a board shows 7-A-A-10-10, someone with 10-10 as hole cards would be the bad beat loser (and top prize winner) to someone holding A-A (or in some bad beats, a straight flush would be involved).

Better odds than Powerball, but …

As many variables are involved, no precise odds are known on the likelihood of the Rivers bad beat being hit, and casino officials haven’t sought them out. But they are long — not Powerball long, but very long.

Consider that, at a normal live poker table, 30 to 35 hands are played in an hour. Rivers’ 30 tables are rarely all in use, but at many times at least half are, especially on weekends or in the evenings. It is safe to say that more than a million hands have been played in the more than 13 months since the bad beat last hit, and possibly more than 2 million.

“You can’t say it’ll never be hit,” Barnabei pointed out, “because it hit a month after it started. … History has shown us it’s achievable.”

It’s just that nothing similar has occurred since then. There have been five “mini bad beats,” however, in which the losing hand must be, at minimum, an aces-full full house, with the losing player holding A-A as hole cards. The current mini bad beat jackpot is $104,506.

It’s something to talk about, truly

Poker players commonly banter at their tables, and as one might imagine, with the main bad beat at its present level — it cleared the $1 million threshold Saturday — it is a common point of jocular discussion in the Rivers room. That goes not just for players but for dealers, who stand to be tipped more than they ever imagined if they provide players the jackpot hand.

The prize has grown more than Brittain said she ever envisioned.

“I thought about $500,000 was what it would get to, and it would top off there about once a year,” she said. “It’s a nice thing because poker players are always looking for that big score, that life-changing money. … It’s amazing it’s gotten to this million-dollar level. It’s not impossible, but for some reason it keeps growing.”

A check through the Bravo poker app of other Pennsylvania poker rooms reveals that the only other casino using the same quad 10’s minimum qualifier for a bad beat is Rivers Philadelphia, the Pittsburgh property’s sister casino that is also owned by Rush Street Gaming. It only pays out a set $50,000, however, rather than increasing the jackpot daily.

Other potential bad beats payouts currently advertised in Pennsylvania range from $35,717 at Hollywood Casino at the Meadows to $319,307 at Wind Creek Bethlehem, with the poker rooms all using different criteria for what hands must play out.

Brittain and Barnabei said that the Rivers poker room is definitely busier than it would otherwise be as word has spread of the lucrative promotion, although it can be hard to specify just how much busier.

“There’s so much other noise involved in the past 24 months, coming out of COVID,” Barnabei said. “So how much is attributed to just people wanting to get back to normal, and how much to things like the bad beat or other promotions? Having said that, the poker room is doing better now than it has done in a very long time. There’s a lot more interest, a lot more people coming in on a regular basis.”

That’s not to say every player in the room is enamored with the promotion. Sharper poker players who understand the long odds involved might roll their eyes at the type of competitor who’s drawn in by the bad beat — though, naturally, they would be happy to try to take advantage of such a player.