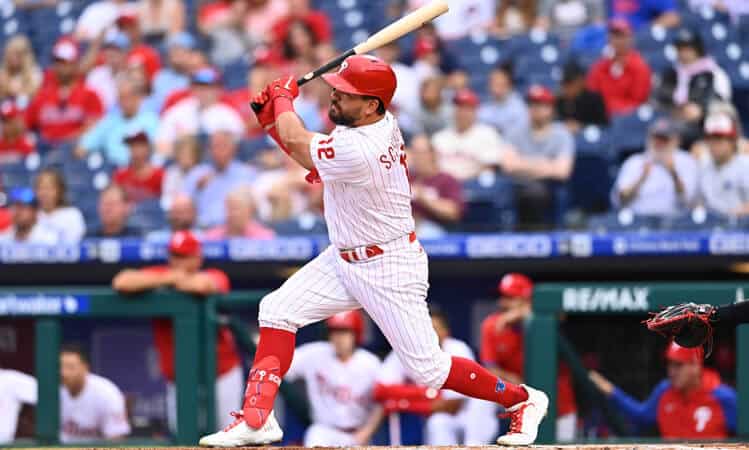 If your mobile sportsbook of choice is offering a “cash out” option on that ticket you’re holding for Bryce Harper to win his second consecutive National League MVP award, take it. Even if you wagered $100 and they’re now offering you 3 cents — take it. That’s 3 cents more than you’ll get if you hold onto it.

Harper went down with a broken thumb on June 25 and has missed the last eight games. He had surgery and expects to return this season, with the most optimistic projections suggesting he could take the field by Aug. 15, missing 33 more games. If he plays every game from then on, he can reach 112 games played. That’s 69.1% of the season. More likely, he’ll play about 60% of the Phils’ games.

But at every Pennsylvania sportsbook, Harper remains listed as the most likely Phillie to win MVP. He ranges from 70/1 at DraftKings and the Kambi-powered books (Barstool, BetRivers, PlaySugarHouse, Parx, Unibet, TwinSpires) to 80/1 at FanDuel, PointsBet PA, and BetMGM. Even at the higher end, that’s quite possibly the biggest ripoff in sports betting right now.

On the bright side: The Phillies are 5-3 without Harper (6-3 if you count the game in which he got hurt, which should count because it was tied 0-0 at the time of the plunking), and other futures bets on the team and its best players hold some promise — particularly tickets on Kyle Schwarber to hit dingers.

If you placed a preseason prop bet on Schwarber to go over his home run total of 30.5 or 31.5 (depending on the book), you’re just about golden now, with the left fielder having blasted homers No. 24 and 25 Tuesday night in an 11-0 romp over the Washington Nationals.

But the potential big money is on Schwarber to lead MLB in home runs. He was priced at +2800 at the Kambi books before the season began. At FanDuel, the only book in PA currently taking this particular action, he was +1200 and the fifth favorite entering Tuesday. By Wednesday morning, Schwarber was +700 and the third favorite, as he and Houston’s Yordan Alvarez both trailed the Yankees’ Aaron Judge by four HRs.

At 7/1, Schwarbs to lead the majors in homers is easily the most promising Phillies player prop as the All-Star break nears.

But it’s not the only one with any hope.

Either pitcher would need to heat up significantly to catch favorite Sandy Alcantara of the Miami Marlins (9-3, 1.82 ERA, a league-leading 123.1 IP and 4.8 WAR), but the two veteran Phillies starters have proven capable over the years of locking in for a couple of months.

Hanging in without Harper

As a team, however, futures tickets on the Phils have a little pep in their step. Tuesday’s win, combined with a Cardinals loss, moved the Phillies into a tie with St. Louis for the third and final wild card spot in this year’s expanded format.

After the Phillies finish this three-game set with Washington (they’re -225 to -240 favorites to win Wednesday night behind Nola), they play four head-to-head against the Cards, fresh off of beating St. Louis in two of three games last weekend.

So the Phils’ postseason hopes are looking up, even with Harper sidelined. But their chances of getting in as a division winner remain slim. They’re 7 games back of the Mets in the NL East and 4.5 behind the Braves, and the Mets are just starting to get their rotation healthy.

As for longer-range team success, the Phils’ odds of reaching the World Series are almost identical to their odds of winning the division, ranging from +1600 to a bettor-friendliest +2000 at BetMGM. And if you’re truly a believer in these flawed but fun Fightins, FanDuel has the juiciest price on a World Series win: 45/1.