Sixers One Starter Short For Road Games, But Narrowly Favored To Get Past Toronto

Raptors not the ideal opponent for Philly, as sportsbooks peg '76ers in 7' as most likely outcome 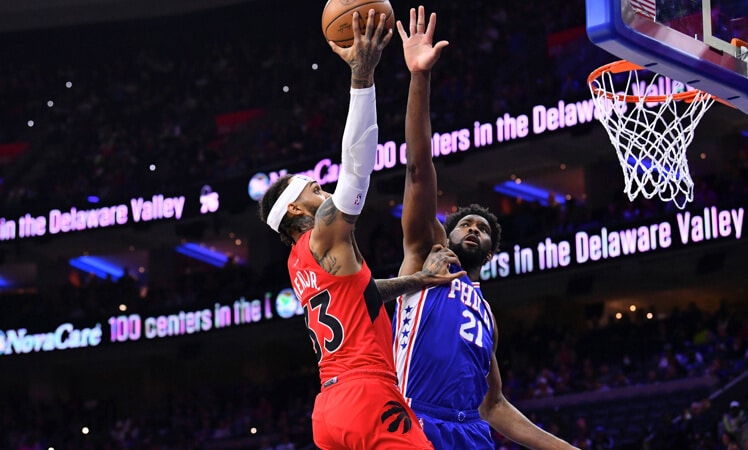 With the playoffs set to tip off for the 76ers this Saturday at the Wells Fargo Center, the mood of Sixers fans, or of bettors holding a Sixers futures ticket, largely comes down to perspective.

The season began with Ben Simmons refusing to play and his trade value getting lower by the day, making it feel like a potential lost year for the team. At the time, if you’d told a Sixers supporter they would acquire James Harden, finish with 51 wins (a half-game above their preseason over/under of 50.5), and reach the playoffs as the fourth seed in the East with a healthy Joel Embiid and a first-round matchup against the Toronto Raptors, any Philly fan would have signed up for that in a heartbeat.

But now that we’re actually here, most Sixers fans aren’t portraits of exuberance. The Raptors are a tough, deep, well-coached team that won three of four against the 76ers this season, and they’re the one team in whose home arena unvaccinated players can’t compete. And it turns out third-year forward Matisse Thybulle, a starter and arguably the most disruptive defensive player in the NBA, got one shot of a COVID vaccine a year ago and stopped there –meaning he won’t be able to play in Toronto during the series.

The Sixers narrowly missed out on a much easier matchup with the Chicago Bulls, while Harden has looked a step slower in his 21 games in a Sixers uniform than he did in his prime. In March and April, the 76ers went just 3-6 against teams that finished in the top 6 in either conference — including 0-2 vs. Toronto.

Relative to the excitement and optimism that caused futures odds to drop when the Harden trade was made, the confidence has been drained out of most local fans heading into the tough first-round playoff matchup.

Your 76ers "earned* the No. 4 seed in the Eastern Conference…

At all of the legal sportsbooks in Pennsylvania, the Sixers are favored to get past the Raptors. But not by much. And the team is a longshot to make a deep postseason run.

Then again, they’re in the playoffs with a chance at going on a run. It’s all a matter of perspective.

The 2022 playoffs begin with a race to four wins against the team that eliminated the Sixers in 2019 with the help of four doinks. The 76ers finished three games ahead of the Raptors in this year’s standings, but ESPN’s Basketball Power Index rates the two teams dead even.

The Sixers have the best player in the series in MVP candidate Embiid, a former league MVP in the 32-year-old Harden, and a breakout star in 21-year-old sophomore guard Tyrese Maxey, who went from a 30.1% 3-point shooter as a rookie to a spectacular 42.7% from beyond this year.

Forward Tobias Harris is a steady (if grossly overpaid) fourth option, and then there are the role players: streaky veteran Danny Green, also streaky younger threat Shake Milton, Thybulle in the home games only, and slow-footed sharpshooter Georges Niang, who enters the playoffs day-to-day with a knee injury.

Then there’s the backup center question. It will be interesting to see whether coach Doc Rivers accepts that 33-year-old DeAndre Jordan can’t hang in this league anymore and gives those six or so non-Embiid minutes each game to 22-year-old Paul Reed, who was a plus-30 with 25 points in 21 minutes in the season finale, compared to Jordan’s minus-14 in 23 minutes.

Toronto is most of the things the Sixers are not. They don’t have any household names, although power forward Pascal Siakam is getting close after averaging 22.8 points and 8.5 rebounds to likely earn a spot on the All-NBA third team. He went off for a 37-point triple-double as the shorthanded Raps topped the Sixers in their final regular-season meeting last Thursday.

Point guard Fred VanVleet’s health is a question mark entering the postseason, but he’s expected to play after sitting out the final three games of the regular season. In Gary Trent Jr., OG Anunoby, and Rookie of the Year candidate Scottie Barnes, the Raptors have three high-upside players under 25 in their starting lineup, while bringing forwards Chris Boucher and Precious Achiuwa off the bench. The Raptors play as a team, both offensively and defensively, and have few glaring flaws despite being undersized (especially against Embiid).

Whereas Rivers has presided over three blown 3-1 series leads and three additional blown 3-2 series leads, and has lost five Game 7s at home over the course of his 23-year head coaching career, Raptors coach Nick Nurse is 5-1 for his career in playoff series and has consistently gotten the most out of his rosters despite losing top players (Kawhi Leonard, Kyle Lowry, Marc Gasol, Serge Ibaka) year after year.

On paper, there’s a clear favorite in this series. On the court, if you watched the way the two teams matched up with each other this season, and you factor in Thybulle missing all road games, it’s a tossup. The sportsbooks are splitting the difference between those two positions.

Not all books had posted series pricing as of Tuesday morning (they do all have lines for Game 1, though, with the home Sixers favored by 4.5 points at most books and 5 at FOX Bet), but those that do have series markets up are closely aligned. DraftKings opened as an outlier on Monday, with the 76ers -210 to win the series and Toronto +170, but those lines were adjusted by Tuesday morning to -180/+150. FanDuel and BetMGM both have the Raptors at that identical +150, with a few cents of variation on the Sixers (-178 at FanDuel, -185 at BetMGM).

You can bet on the exact series result, with all books pricing a 76ers win in 7 games as the most likely outcome. It’s +340 at DK, +350 at FD, and +360 at MGM. Sixers in 5 is the next most likely option, as apparently the books are bearish on the Sixers closing out a successful series on the road, where they’ll be without Thybulle.

The operators also offer series spread betting, with the line at Sixers -1.5 games. In other words, will or won’t Philly win in 6 or fewer games? The best payout on the 76ers -1.5 is +124 at FanDuel, while DraftKings has the most bettor-friendly vig on the Raptors +1.5 at -140. (Again, those vigs reflect the expectation that the Sixers will more likely than not need the full seven games to advance.)

Each book has its own collection of intriguing series props. For example:

Beyond the first round

While escaping a tough series against the Raptors is of the most immediate concern to Sixers fans, just making it to the second round does not a successful and satisfying season make. So what are the odds on a deep run?

The Sixers have only the fifth-shortest odds to win the Eastern Conference. DraftKings sees it as a somewhat realistic outcome at +450, while FanDuel and such Kambi-connected books as Barstool and BetRivers have longer +600 odds. The Bucks, the not-yet-officially-in-the-playoffs Nets, the Celtics, and the Heat are all seen as more likely to reach the finals.

And if you think the 76ers can win the franchise’s first NBA championship since 1983, DraftKings and the Kambi books are all offering +1400 (which, sadly, is the same price most books were posting right before the Sixers acquired Harden). FOX Bet believes in the Sixers much more, paying only +1000 on them.

Keep an eye on all the online sportsbooks as the week wears on, as some figure to get creative with special promotions and odds boosts on the Sixers.