Location-wise, Live!, which opens to rewards members next week and to the general public on Feb. 11, will be the envy of all its competitors.

But “catching,” as in “watching,” will be quite possible indeed from the Live! Casino Philadelphia rooms that face south when the Phillies are next playing home games at Citizens Bank Park. There’s a clear view of the field from the upper floors of the hotel attached to what will soon become Pennsylvania’s 14th brick-and-mortar casino.

Location-wise, Live! Philly will be the envy of all its competitors. When the COVID-19 pandemic is over and fans are again attending baseball, football, basketball, and hockey games — not to mention concerts — in Philadelphia’s Stadium District, this casino figures to be positively swamped on game days.

For now, though, it’s easing into existence. In advance of its Jan. 19 opening to Live! Rewards Club members who make a reservation and its Feb. 11 welcoming of the full public, Live! Casino Philadelphia provided the media a sneak peek on a tour Thursday. Though still under construction both inside and out, there’s no mistaking the quality — verging on Vegas-like excess in some areas — of the $700 million project.

An odd time for openings

The property is the second in the state from the Cordish Gaming Group, which operates a Live! casino in Maryland and just before Thanksgiving opened a mini-casino in the Pittsburgh area.

“At a time when not many businesses like this are opening, we’re not just opening one casino, but two casinos in the commonwealth during the pandemic period,” Cordish Gaming Group President Rob Norton told the assembled media.

There are risks involved with opening public-facing businesses prior to widespread distribution of COVID-19 vaccines, but “we’re doing things in an aggressive way to be safe,” Norton emphasized. He pointed to the company’s “Play It Safe” plan, which was first utilized at the Maryland venue and is being replicated in Pittsburgh and Philly, including an Atmos Air Bi-Polar Air Purification System and the Reel Clear slot machine management system, which shuts down a machine after use until an attendant has sanitized it.

When asked why the new property would elect to open at this time, with capacities limited in the state and virus cases on the rise in many areas, Cordish Gaming Group Executive Vice President Joe Billhimer pointed to the more than 1,000 employees ready to begin working and the “economic impact” of bringing this 510,000-square-foot facility to South Philly.

Gambling enthusiasts will not be disappointed in the offerings: 2,100 slot machines, 121 live-action table games, a bank of electronic tables, a 29-table poker room, and a FanDuel-branded sportsbook. 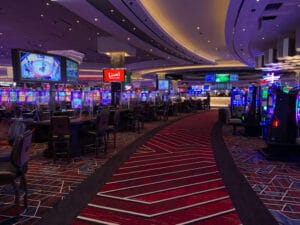 The sightlines are a key part of the gaming floor design, as from certain spots, patrons can see all the way from one end to the other. It’s a decidedly open, welcoming gaming space. The Center Bar, situated where you’d expect something called the “Center Bar” to be, offers clear views of the entire casino floor.

The tables and machines all have the Plexiglas dividers we’ve grown accustomed to seeing during the COVID era, and there’s no doubt they negatively impact the ambiance and social lure of the casino experience. But someday, perhaps before the end of 2021, the Plexiglas will come down, and Live! will become a central player in the revival of Philadelphia nightlife. 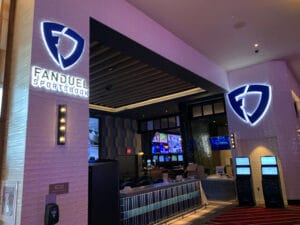 The sportsbook itself is small, offering seating in about a dozen comfortable recliners in a room the casino plans to rent out for a VIP experience, but it’s directly attached to the Sports & Social Philly sports bar.

“We’re here in the stadium district. The sportsbook is going to be a very important amenity,” Billhimer insisted, noting also that Live! is located right near all the public transportation stops that connect fans to the sports venues.

Added Chief Marketing Officer Jake Joyce, “Wait until you come here on a Sunday morning [during football season]  and look at all the people tailgating at the casino and sportsbook.”

In an extreme rarity, the PlayLive! online gaming site launched in advance of the brick-and-mortar casino. It’s off to a relatively slow start — in November, for example, the site and app generated $294,093 in revenue, ranking ninth out of 10 PA iCasinos — but one presumes the start of the in-person casino experience will help generate more online signups and deposits. 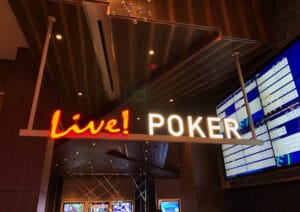 No luxurious casino is complete without top-shelf eateries, and The Prime Rib will serve as the signature Live! restaurant when it opens later in February. If you’re in the mood for Asian cuisine, turn to Luk Fu (which should be fun to hear drunk casino-goers mispronounce as they transpose certain letters), which offers not just an alluring menu but also two private karaoke rooms in the back.

Live! will be the second casino to open inside Philadelphia city limits, and its hotel is one major feature setting it apart from Rivers Philadelphia (formerly SugarHouse). The 208 guest rooms are decidedly upscale, and the Stadium District aesthetic carries over to Philly sports-themed artwork in the hallways. 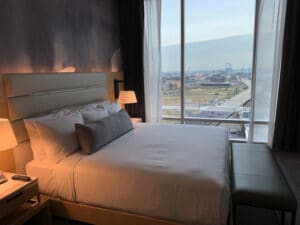 And there’s one other piece of art you can’t miss: a twist on Philly’s well-known “LOVE” statue that doubles as a bit of branding/marketing brilliance: 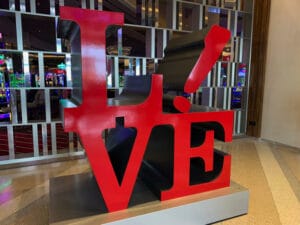