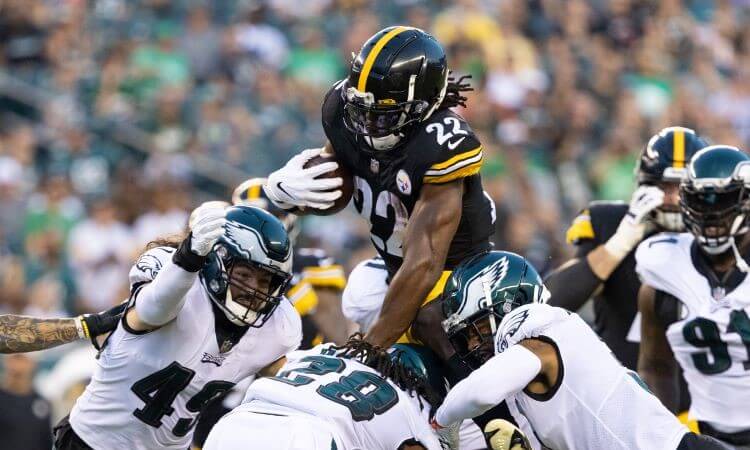 The Steelers open their 2021 season Sunday afternoon with a harbinger of what lies ahead in a challenging year: a road trip to Buffalo to kick off what is viewed as the NFL’s toughest schedule.

Pennsylvania’s baker’s dozen of online sportsbooks make the Steelers 6.5-point underdogs vs. a rising Bills team that is considered the league’s top Super Bowl contender behind the Kansas City Chiefs and Tampa Bay Buccaneers. Buffalo is generally 12/1 to win it all, with quarterback Josh Allen the third or fourth favorite for league MVP, also at 12/1 among various oddsmakers.

Expectations for the Steelers, meanwhile, are the lowest in years, partly due to the way they finished 2020. They collapsed after winning their first 11 games, eventually humiliated at home 48-37 by the Cleveland Browns in their opening playoff contest.

The franchise hasn’t sniffed a Super Bowl ticket in the past decade, and the far-flung Steelers Nation might be counting on 2021 as the last best chance for a while, considering future Hall-of-Famer Ben Roethlisberger is 39 and could be in his last season.

The oddsmakers don’t see a February Super Bowl trip to Los Angeles for the entire team as very likely, however, with the Steelers’ odds no shorter than 40/1 (FOX Bet) to add a seventh Lombardi Trophy. The best wager for optimistic sports bettors would be with BetMGM at 50/1.

The over/under on Steelers wins with this year’s new 17-game schedule is 8.5 across the board, compared to the Bills’ 11. Buffalo is universally tabbed to finish third in the AFC North, with odds available at up to +500 to win it from DraftKings.

They’ve been 6.5-point ‘dogs for months

The sportsbooks have been consistent with that 6.5-point spread vs. the Bills, the same as it has been in lines offered weeks and even months before the season’s start. BetRivers, Unibet, and other books using Kambi odds provide the best return on investment, with reduced vig to -107 for a bettor taking the Steelers and the points.

DraftKings, meanwhile, is posting the best moneyline return for a Steelers victory at +250.

The over/under on the game is generally set at 48.5, although FOX Bet dips 48 with standard -110 vig, making it the best place to bet for someone figuring Roethlisberger and Allen will find plenty of ways to get their teams into the end zone.

Roethlisberger has his core group of splendid wide receivers back in JuJu Smith-Schuster, Chase Claypool, and Diontae Johnson, plus the prospect of a resurgent running game sparked by first-round draft choice Najee Harris.

Harris can be bet at 10/1 odds from BetMGM to be voted the NFL’s Offensive Rookie of the Year. The only Steeler with odds making him more likely to win a coveted award at season’s end is linebacker T.J. Watt, the third most likely Defensive Player of the Year award winner, currently at +850 from FanDuel.

FanDuel, DraftKings, and the Kambi-backed sites all have season prop options for player performance by top players on the Steelers and other teams.

A futures bet can be placed with DraftKings, for instance, for Roethlisberger to throw for over 3900.5 yards. It posts an over/under 990.5 for Harris’ rushing yards and 790.5 for Smith-Schuster’s receiving yards.

Various sites have created special Steelers prop bets. BetRivers offers a wager at even money that Roethlisberger and his two backups, Mason Rudolph and Dwayne Haskins, will all attempt a pass during the season. FOX Bet lists 17 different special Steelers season-long prop bets and parlays attached to individual and team performance, most of them requiring a combination of highly positive outcomes. One wager is offered at +200 that Schuster, Claypool, and Johnson will all achieve at least 750 receiving yards.

Aside from any special betting activity offered around the Steelers, the sportsbooks are providing numerous bonuses and incentives to welcome back the NFL season, which serves as a bigger source of betting activity than any other sport or league.

Nothing, of course, tops the special DraftKings promotion for Thursday night’s opener between the Super Bowl champion Buccaneers and Dallas Cowboys: The Bucs can be bet +73 for up to $25.

There are numerous other attractive offers, and more promotions might arrive before Sunday’s Steelers kickoff. Among the offers already posted are two from FanDuel: It has a “Super Win Bonus,” which in return for a $50 bet placed on a Super Bowl winner grants $5 in site credit for every regular season win by that same team, and is also offering a $10 risk-free bet for any Week 1 game.