There is NFL betting chaos across Pennsylvania as Big Ben is sitting out the Steelers finale and the Eagles look to play spoiler in Week 17. 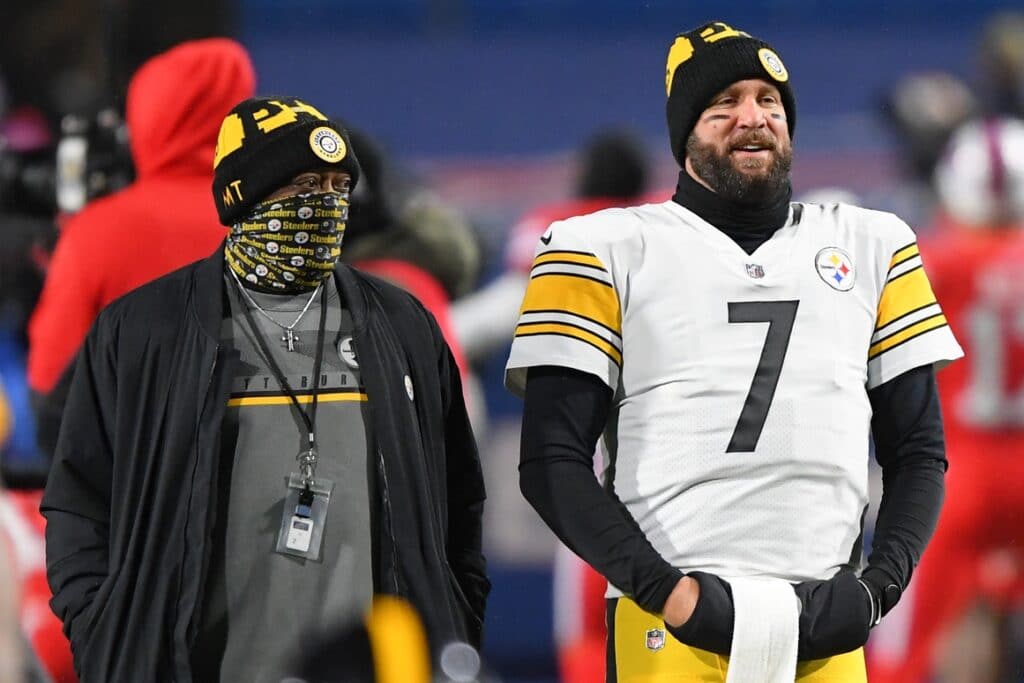 Even when they have nothing to play for, coach Mike Tomlin and the Pittsburgh Steelers still know how to cause a stir.

Shortly after winning the AFC North last weekend and being assured of a first-round home game and no worse than the No. 3 seed in the postseason, Tomlin made the command decision to rest quarterback Ben Roethlisberger and other first-stringers for Pittsburgh’s season finale against Cleveland.

The decision itself is not surprising considering the Steelers arguably have been the team most affected by COVID-related schedule changes in this topsy-turvy 2020 NFL season. Pittsburgh’s bye week was abruptly moved up to Week 4 from Week 8 when the league deemed the Tennessee Titans unable to play.

The Steelers also played five games in a span of 25 days in December, capped by Sunday’s 28-24 come-from-behind victory over Indianapolis that clinched the division title. They have played games on a Sunday, Monday, and Wednesday, including one Wednesday-to-Monday turnaround.

Tomlin’s decision, though, has caused chaos at sportsbooks across Pennsylvania for this Week 17 contest, through which the Browns can end an 18-year postseason appearance drought with a victory over their hated rivals. With a defeat, Cleveland’s other paths to the playoffs include a loss by the Indianapolis Colts or a loss by Tennessee coupled with victories by Miami and Baltimore.

Are the Steelers passing up adding to the Browns misery?

Ben Roethlisberger Says Mike Tomlin ‘Told Me That I’m Not Playing As Soon As The Last Game Was Over’ – #HereWeGo #Steelers https://t.co/q5ZPPVXWfP

Of course, it would not be the Browns without some issues on their side following a 23-16 loss to the New York Jets when nearly their entire wide receiver corps was waylaid by COVID protocols. Top wideout Jarvis Landry and fellow receiver Rashard Higgins were activated off the COVID reserve list Thursday, but linebacker Malcolm Smith was placed on it. That rules him out for the Steelers contest along with fellow linebacker B.J. Goodson and safety Andrew Sendejo.

Tomlin announced early enough in the week that he would be sitting Roethlisberger and starting Mason Rudolph that it sent bettors sprinting to the books to pound the Browns — the lookahead line of Browns -4 quickly swelled to -7.5 points. Even before it was reported Thursday that the Steelers coach would also hold out center Maurkice Pouncey, edge rusher T.J. Watt, and defensive end Cam Heyward, there was a second surge of Browns backers who pushed the line to double digits before there was finally some Steelers buy-in.

At sportsbooks across the Keystone State, the Steelers are underdogs ranging from +8.5 at FanDuel to +10 at both FOX Bet and BetMGM. The Kambi platform powering DraftKings and BetRivers has both books offering the Steelers +9. Of those five operators, FOX Bet is the only one straying from the standard -110 on both sides, offering the Steelers -118 with the 10 points and even money (+100) on the Browns.

For those who like the simple pleasure of just picking a winner, both FOX Bet and BetMGM are offering the best value for a Steelers victory at +350, followed by DraftKings and BetRivers (+330), followed by FanDuel (+310).

Meanwhile, in Philadelphia, most of the drama surrounding the Eagles (4-10-1) for Sunday night’s season finale versus the Washington Football Team (6-9) involves relying on rookie quarterback Jalen Hurts to play spoiler and prevent the WFT from being crowned NFC East champion. Philadelphia cannot win the division, but its beating Washington means the winner of the Dallas-New York Giants game will.

Hurts has been expectedly uneven in his three starts replacing Carson Wentz — and his talents and shortcomings  were on full display in last week’s 37-17 loss to Dallas. The second-round pick threw for 342 yards, including an 81-yard scoring hook-up with DeSean Jackson, and had 411 total yards of offense, but he was also intercepted twice and lost a fumble.

Washington has its own set of issues after cutting quarterback and 2019 first-round pick Dwayne Haskins on Monday, but the expectation is Alex Smith — who sat out last Sunday’s 20-13 loss with a strained calf — will be under center as he looks to add a division title to an already-impressive comeback story from a gruesome leg injury suffered in 2018.

The line for this game has also seen substantial movement since the Eagles were installed as 4-point favorites on the lookahead line and still -2.5 on Sunday night. Bettors have thrown action Washington’s way, making it a narrow road favorite as confidence grew that Smith and not Tyler Heinicke — who replaced Haskins in last Sunday’s loss to Carolina — would be at quarterback.

The Eagles are slim underdogs across the board. DraftKings and BetRivers are offering them +2.5 at -112, while Fox Bet and BetMGM have them listed at +2 and -110. FanDuel has the most narrow spread at +1.5 points and -106.