Steelers Have Already Turned Season Around, Eagles Have A Chance To Save Theirs

Pittsburgh expected to feast on Lions, and Philly's just a small underdog in Denver 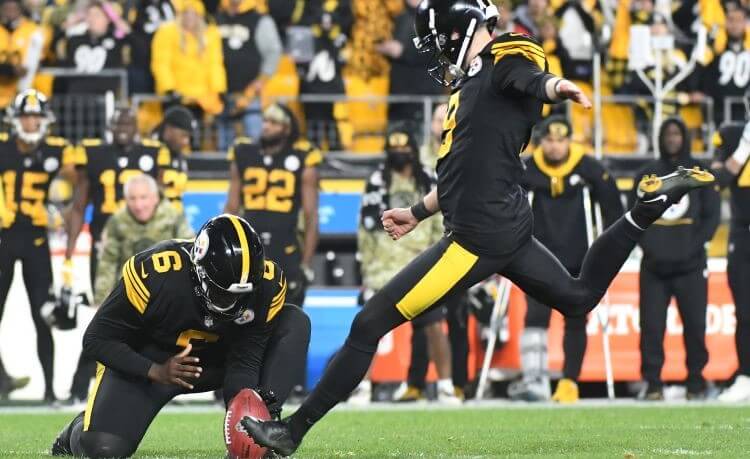 That kind of sums up where things stand for Pennsylvania’s two NFL entries midway through the 2021 schedule, with Pittsburgh resurrecting a season that once seemed lost and Philadelphia showing competitive signs while struggling to get wins.

Now the Steelers get what seems like a breather at home Sunday as a heavy favorite over the NFL’s only winless team, the Detroit Lions, and the Eagles are a small underdog against the Denver Broncos at Mile High Stadium.

The state’s many legal online sportsbooks can be expected to have various odds boosts or other special offers for the game by Sunday morning. For now, we outline below the mainstream betting action available.

The Steelers’ 29-27 win over the Chicago Bears wasn’t pretty in the style points category, but the bottom line was their fourth straight win put them in position to somehow tie the Baltimore Ravens atop the AFC North if they can dispatch another substandard NFC North foe.

For a team that was once 1-3 and in the division cellar, coach Mike Tomlin will take winning points over style points any day.

In his 15 years as a head coach, he’s never had to know what it feels like to lose nine games in a season, while Lions coach Dan Campbell may have to taste that level of defeat just nine games into his first year.

The oddsmakers as of Friday morning made the Steelers anywhere from an 8-point to 9-point favorite over the Lions. The lower number, and thus best number for a Steelers backer, was available at DraftKings, FOX Bet, Caesars, and Betway. Betfred was the one site using a 9-point spread, but at a favorable +105 price for a Steelers bettor giving the extra point.

It would be tough to make a lot of money on the Steelers on the moneyline without risking a lot, and there’s a cautionary tale in how many big upsets took place in the NFL last week (almost including the Steelers-Bears). But for the Steelers faithful, the -350 from DraftKings and FOX Bet presented the best option, with FanDuel and Caesars not far behind at -360.

And in what has become a regular trend now, the Steelers are participating in a game with the lowest over/under points total of the NFL slate: generally 42.5, with BetRivers, Unibet, TwinSpires, and other Kambi-backed sites a bit higher at 43. For an “over” bettor at 42.5, Betfred offered a competitive advantage with its reduced juice of -105.

The Lions’ biggest (perhaps only?) advantage — other than an odd historical tendency by Tomlin teams to let up against weak opponents — is they’re coming off a bye week at the same time the Steelers are coming off a short week from their Monday Night Football appearance.

On the other hand, Detroit has shown no particular aptitude on either offense or defense, with a 44-6 home loss to the Eagles in their last game representing a new low.

The Steelers, however, are getting thinner by the week at wide receiver, with an injury to Chase Claypool likely to sideline him alongside JuJu Smith-Schuster, and Tomlin noted they’d better not succumb to taking the Lions lightly.

These Eagles seem to be good travelers

The Eagles (3-6) travel across the country to Denver (5-4), and the good news there is all three of Philadelphia’s wins have come on the road. Maybe that’s one factor in the home team, despite its better record, being favored only by the amount considered normal for home field advantage.

The Eagles were a 2.5-point underdog everywhere Friday morning, with FOX Bet and Betfred offering an extra edge to take them by making the price +100, or even money. Betfred’s moneyline price was also best for an Eagles bettor, at +125.

The points total was either 45 or 45.5, depending on the site, with an “over” bettor able to find the lower number at BetMGM, DraftKings, Caesars, and Betway.

Those Denver wins included a 30-16 upset of the Cowboys in Dallas on Sunday, which put the Broncos a half-game behind the San Diego Chargers and Las Vegas Raiders in their highly competitive division, in which every team is over .500.

Denver employs the highly accurate if less than explosive Teddy Bridgewater at quarterback. The Eagles have enabled a succession of QBs to be extraordinarily accurate, with the Chargers’ Justin Herbert becoming the fifth to complete at least 80% of his passes against them.

In that 27-24 loss to San Diego, coach Nick Siranni showed the newfound and helpful focus on the running game against the Lions the prior week was no fluke. While Jalen Hurts again threw about half the number of passes he was attempting earlier in the year, he, Jordan Howard, and Boston Scott each ran for at least 40 yards for a team total of 176 on the ground on 39 carries.

The Broncos have been stalwart against the run, allowing 98.3 yards per game, so whether the Eagles can succeed at their recent running ways could end up determining if this is their third road win of the season.