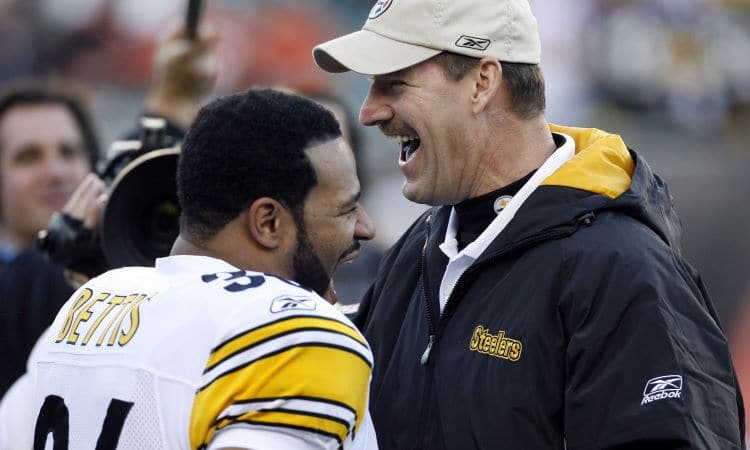 When the Las Vegas Raiders fell to a 5-5 record Sunday befitting a season of parity in the NFL, a Reddit user remained perfect with his weekly moneyline predictions on the Raiders, made via coin flip at the start of the regular season.

Had the user placed $100 on the 10-game parlay, he would be in line for a $185,000 payout, illustrating the random nature of an arbitrary toss of a two-sided coin. On the eve of Thanksgiving, any mention of a coin toss on the holiday brings back painful memories for Steelers fans recalling a bizarre sequence from 1998 when Pittsburgh faced the Detroit Lions on Thanksgiving Day.

The episode, which is still referred to pejoratively as “The Phil Luckett Coin Flip Fiasco,” was just as agonizing for sports bettors and bookmakers who needed the Steelers to cover at minus 2.5.

Trailing 16-13, the Steelers forced overtime when Norm Johnson connected on a 25-yard field goal with 4 seconds left in regulation. The kick triggered an outrageous series of events, beginning with the overtime coin toss. Steelers running back Jerome Bettis strolled onto the Pontiac Silverdome field with safety Carnell Lake as team captains. As the camera zoomed in on the head referee, CBS play-by-play announcer Greg Gumbel informed viewers that official Phil Luckett stood at midfield ready for the toss.

The Steelers have been getting screwed on Thanksgivings for years. #Steelers #Thanksgiving pic.twitter.com/sZ7QhVz3DM

“Of course, there’s not much of a decision to make here in a dome,” said Phil Simms, Gumbel’s broadcast partner. “You just want the ball.”

Bettis, a six-time Pro Bowler, had a history of calling heads at the start of road games. But since the game entered overtime, he decided to change it up after having selected heads for the game’s opening coin toss. Bettis made the change on the fly, after nearly enunciating “heads.” The abrupt switch to “tails” apparently caught Luckett off guard.

“I said, you know what, let me switch to tails,” Bettis explained in a 2017 interview with talk show host Graham Bensinger. “I was like, ‘Huh-TAILS.’ For some reason, he heard the ‘Huh’ and cut if off.”

Though Bettis clearly announced tails, the official thought Bettis said heads instead. The coin, of course, landed on tails. Gumbel also believed Bettis said tails, along with the Steelers bench and much of the national audience watching on TV.

“Heads is the call,” Luckett said, drawing a look of incredulity from Bettis. Lake and Bettis vehemently disputed the call, continuing their protests as Luckett explained the call to Steelers coach Bill Cowher on the sideline. Although the Steelers argued for several minutes, the officials gave the ball to the Lions.

“It’s not one of those things you can fudge, you can hear what I said,” Bettis told Bensinger.

“The referee didn’t know which one to choose, except he just took the first one,” SuperBook Executive VP Jay Kornegay told Penn Bets this week.

At the time, Kornegay was employed in Las Vegas by the Imperial Palace, where he worked for 15 years before he was hired to run the Superbook in 2004.

By the time overtime began, some were convinced that the coin toss served as a harbinger for the final result. At the Las Vegas Hilton SuperBook (now the Westgate), sportsbook head Art Manteris could see the writing on the wall. Manteris, a Pittsburgh native, needed the Steelers to cover at 2.5, as the public backed the Lions.

“Of course I remember it, and of course we lost in excruciating fashion,” Manteris told Penn Bets. “The ref did not understand what he said, the other side got the ball, I said they’re going to drive down and win the game.”

On the first offensive play in overtime, the Lions ran a play-action fake to Barry Sanders, giving quarterback Charlie Batch enough time to throw downfield. Batch delivered a strike to wide receiver Herman Moore, who made an acrobatic catch over Lake along the right hashmarks. Moore’s 28-yard grab placed the Lions in field goal territory.

Still, the Lions had work to do. On a 3rd-and-11 from the Steelers 38, two defensive backs sacked Batch near midfield to halt the drive. But the Lions received a reprieve when defensive back Chris Oldham grabbed Batch’s facemask for a 15-yard personal foul. Two plays later, Lions kicker Jason Hanson hit a 42-yard field goal for a 19-16 win.

Eating my worst Thanksgiving dinner ever at a sketchy, mostly-empty sports bar in West L.A. at 10:30 a.m. my first year away from home and completely broke, and then Phil Luckett and Jerome Bettis bungle a coin toss and we go from 7-4 to 7-9 over the next five weeks. https://t.co/fujh3fe9mK

“I think that’s the last time the Lions won on Thanksgiving,” Kornegay joked.

Manteris, meanwhile, was not in a jovial mood.

“That was bad, because it was a big game on a big decision on a big day,” Manteris said. “All your eggs [as a sportsbook] were only in a couple of baskets, you can’t afford to lose the game. On a Sunday, you can afford to lose a game and make it up elsewhere. Your opportunities on a holiday are very few and far between.

“And on top of it, I had a house full of Thanksgiving guests at the time waiting to eat when the game ended. … That was miserable.”

The Steelers are 2-6 all-time on Thanksgiving Day, appearing last in 2016, a 28-7 win over the Colts. Last season, COVID-19 illnesses caused the NFL to postpone a Steelers-Ravens game that had been scheduled for Thanksgiving night.

In a ranking it produced Wednesday, CBSSports.com called Luckett’s gaffe the No. 4 Thanksgiving Day moment in NFL history. It also marked the final time the Steelers used Bettis on a coin flip.

“For my role, I got fired from the coin toss, “Bettis told Bensinger. “Coach Cowher fired me.”

Four days after the game, the NFL changed its policy on coin flips, instituting the first coin toss rule change in 22 years. Known today as the “Jerome Bettis Rule,” players now must call heads or tails before the flip. Bettis, who joined BetRivers as a brand ambassador in January, could not be reached for comment for this article.

Manteris, a 2019 inductee of the Sports Betting Hall of Fame, retired from Station Casinos in May after 43 years in the industry. He doesn’t see any marked difference in the quality of officiating since the Supreme Court’s historic PASPA decision on sports betting in 2018.

“Were there bad beats, bad decisions, and bad calls back then? Of course there were,” he said. “Are there today? Yes. Instant replay is not a full-proof answer. There are still disputed calls, even with the replay.”