A Super Bowl Bet, A Nick Foles Thigh Tattoo, And The Marriage That Survived It

Patriots fan offered Eagles fan $5,000 to get out of getting inked — and got shot down 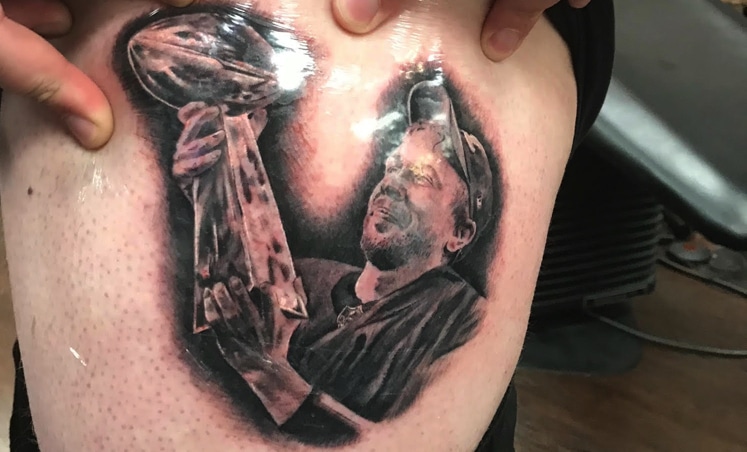 Dig, if you will, the picture — of Nick Foles tattooed on a thigh.

Not on the thigh of an Eagles fan, mind you, but on one belonging to a Patriots fan. Amazingly, this Patriots fan was sober when he got this tattoo. More amazingly, he neglected to inform his wife-to-be that he was getting this tattoo, which she would have to contend with, in various stages of undress, for the rest of her life.

If you haven’t pieced it together by now, this tattoo was the result of the Patriots fan being on the losing end of a rather audacious peer-to-peer sports bet involving the 2018 Super Bowl, where Foles, subbing for injured starting QB Carson Wentz, somehow piloted the Eagles to an upset win over a Tom Brady-led New England squad.

This is the story of that bet, the engagement that somehow survived it, and the friendship it strengthened.

‘I should have put a buyout clause in there’

After serving in the military, a Boston native named Branden (Penn Bets has agreed not to use last names in this story, to spare its subjects any undue retribution) was living in a “party house” in Spokane, Wash., trying to get through college. An acquaintance of his, named Mike, felt that Branden’s raucous living situation would prohibit him from earning his degree, so Mike offered to let Branden stay at his home, rent-free.

During their three years of cohabitation, said Branden, he and Mike “became great friends.”

After graduation, Branden moved around the country for various jobs. One of his stops was in Seattle. After the Patriots beat the Seahawks in the 2015 Super Bowl, aided by Malcolm Butler’s goal-line interception, Branden had his then-girlfriend open the car door on their way home from watching the game so he could taunt Seahawks fans.

“I think I got punched in the face twice,” he recalled.

Despite the fact that the Seahawks were, by far, the closest team geographically to his hometown of Spokane, Mike rooted for the Eagles because he was fond of Randall Cunningham as a kid. He considers the Seahawks “my most hated team,” adding that their “fan base is terrible.”

Mike has tattoos all over his body, including a rendering of the U.S. Constitution on his back and a thigh inked with a portrait of a dead dog. Prior to the Foles ink, Branden only had a tiny shoulder tattoo that he got while in the service.

The two friends promised that if the Eagles and Patriots ever played each other in the Super Bowl, they’d “get together, cater food, and kick it,” recalled Branden. But when it actually happened, Branden was in Palm Desert, Calif., with another friend.

This did not please Mike, who felt Branden had broken his word.

“The worst part was you wouldn’t even watch the game with me,” Mike told Branden on a three-way call with Penn Bets. “We were supposed to have a date.”

Mike took out his frustration by roping Branden into a group text in which, per Branden, “the s–t talk just keeps going and going — until it escalates into a tattoo bet.”

“I was in Palm Desert for the Super Bowl, which is why he was pissed, which is how the bet came about,” added Branden. “I was like, ‘There’s no chance they’re beating New England.’ The bet is that the loser has to get the winning quarterback’s face on him. I’m like, ‘Whatever, fine.’ I should have put a buyout clause in there, like, ‘I lost, but here’s $500.’

“Two other guys got brought into this bet to cover cost of the tattoo. Now it’s just simply a tattoo bet, no money exchanged.”

‘You get that tattoo, you’re in a world of hurt with me’

These two benefactors stood to gain nothing financially from staking the tattoo. They “just wanted to see somebody get embarrassed,” explained Branden.

“By this point, I hadn’t told my wife,” he continued, pointing out that, at that juncture, she was still just his fiancée. “My wife has no tattoos — she’s from this super Christian household. So there I am, sitting in this house in Palm Desert with these rich people. The Patriots don’t play Malcolm Butler, and we lose.”

Predictably, said Branden, “Mike just can’t get enough of this. In my mind, I’m like, ‘There’s no way he’s going to make me do this.’ But I gave him my word, and he said, ‘You’ve got to get tattooed before the start of next season.’ Fast forward six months, I tell my wife about the bet, and she’s like, ‘There’s no f–king way you’re getting that.’ She basically warns me, ‘You get that tattoo, you’re in a world of hurt with me.’

“My buddy Mike has actually got a tattoo guy in Spokane. You’ve got to book this guy out like five months in advance,” Branden went on. “So Mike’s like, ‘Hey, I booked a date. You’ve got to be there.’ At the time, I was working in the Portland area and I covered Spokane. Mike was booking a comedy club and said, ‘Bring your wife; we’ll make this a date weekend.’ We fly out to Spokane. The herd splits — men and women — and he’s like, ‘You’re getting the tattoo.’ Eventually we end up at the tattoo shop.”

All the while, Branden thought he could ultimately get out of the bet. But when he and Mike rolled up to the tattoo parlor, he saw that Mike had arranged for a handful of spectators to witness the inking. There was only one thing Branden felt he could do: try and pay Mike off.

“The next phase of that is I’m sitting there in this shop and this tattoo guy comes up and he’s got this 11-by-8-inch picture of Nick Foles holding the [Super Bowl] trophy. And he’s like, ‘What were you thinking?’ And I’m like, ‘I’m thinking a silver dollar at best.’ I’m not going to desecrate my body for a f–king football bet. And he’s like, ‘If I do a half-dollar size, it’s gonna look like a birthmark. It won’t have any detail.’ I was like, ‘Get it as small as you can where you can still get the detail you need.’ Mike wanted it on my chest or my arm and I’m like, ‘We’re putting it on my thigh within the boxer-brief line.'”

And so it began.

“People sit there and watch the first couple runs of the tattoo,” said Branden. “I was really feeling down and miserable about it, then the tattoo artists started coming up to my booth and saying, ‘Did you really get this because you lost a bet? You’re the f–king man for keeping your word.’ I never would have said I wanted a Nick Foles tattoo, but I was like, ‘Man, I really like this tattoo.’” 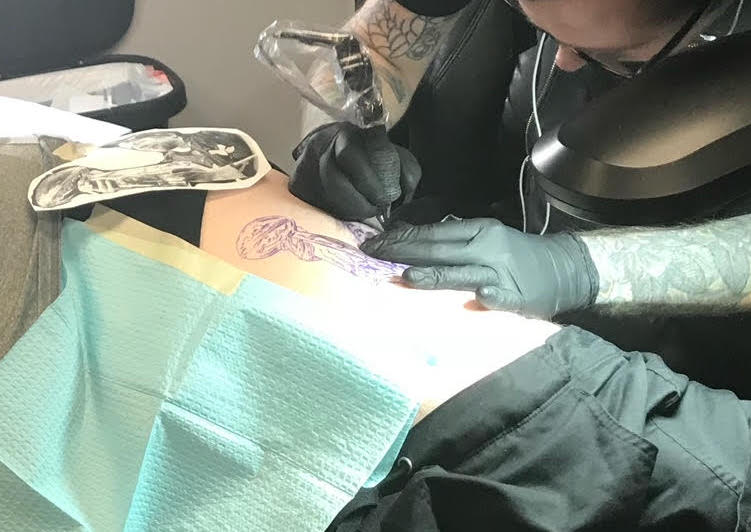 Branden’s enthusiasm would prove short-lived. While he was getting inked, his wife “got kind of drunk with the girls,” he said. Branden got back to their hotel and headed straight for the bar. As he tucked himself into a stiff drink, his wife called down and said, ‘Why don’t you grab a glass of wine for me. I’m taking a bath.’ I show up, she’s in the hot tub, and she’s like, ‘Are you getting in?’ I’m like, ‘No, I’m good.’”

This response, naturally, perplexed her — and compelled Branden to come clean.

“I said, ‘Remember that Super Bowl bet I made?’ And I dropped my pants and pulled down my boxers,” he said. “It’s a top-three pissed I’ve seen her. She, like, can’t even look at me. So I sleep on the couch in this suite in the second room.

“The next morning, I wake up and I can hear her getting ready. And there’s two French doors. She punts the doors open and eyes me down and walks to the main door and tries to slam the hotel door. It moves pretty fast, but then the hydraulics kick in and I kind of chuckled. She was absolutely miserable for days. She was an absolute d–k to Mike that weekend.”

She was equally steamed at Branden.

“We went to the comedy show that night and she did not say one word to me,” he recalled. “What really pissed her off is we planned this without her.”

“Everybody knew but her,” added Mike, “because we knew she’d get mad.”

About three weeks later, Branden’s wife-in-waiting started speaking to him again. She was embarrassed by Branden’s tattoo and anxious to move on from the incident.

But the incident wasn’t ready to move on from her — or anyone involved, for that matter.

One concession Branden managed to extract from Mike was that the photo of the Foles tattoo would not be shared on social media. Fat chance: Branden and his future wife were, in his recounting, “sitting on the couch watching a movie and Mike posted a picture of that tattoo on Instagram.”

“My wife saw it, went into orbit again, and sprinted upstairs, crying,” said Branden. “I told Mike, ‘You just basically ripped the scab off again.’ To this day, my wife has never made mention of this tattoo, she hates it so much.” 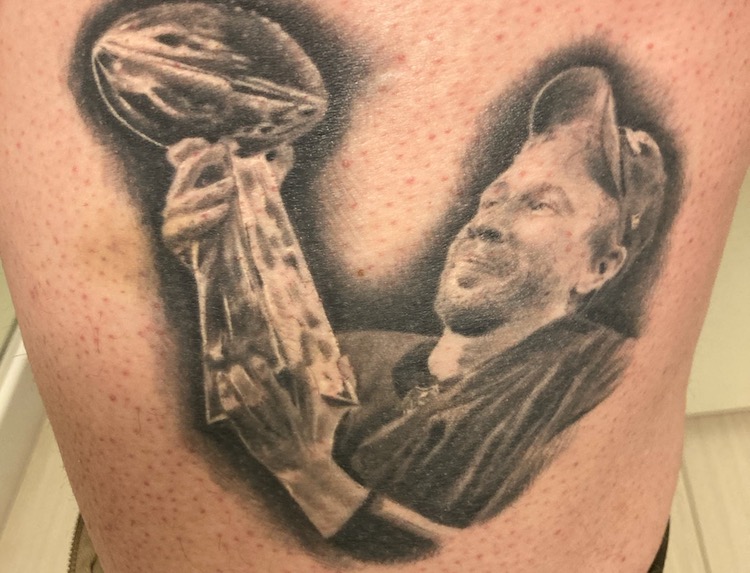 Future tattoo bets ‘on hold for a while’

While the Foles tattoo represents what Branden calls “the Everest of my stupidity,” he doesn’t have many regrets. For one, his fiancée went ahead and married him, and the pair have since moved to Spokane, where, in certain situations — mostly involving alcohol — he regales people with the tattoo’s genesis story and shows it off with pride.

“You have a couple cocktails with the right group of people and the story comes up and people are like, ‘No way,’” he shared. “I have to drop my pants a little bit, which isn’t something you do everywhere. I’m sure some people, when they walk away from me, are like, ‘What a f–king idiot.’ But I’ve gotten more positive support than I have negative. They’re amazed that I kept my word and that Mike turned down the $5,000.

“I think that’s pretty telling to the character of him: He said no to $5,000. Oddly enough, our friendship is maybe even tighter now.”

As for any future tattoo bets, Branden said they’re “on hold for a while.”

“Now that he’s actually married,” interjected Mike, “he has a supervisor.”

Foles, whose nickname involves an appendage that rhymes with his first name, will forever be revered in Philadelphia. But that glorious title run will undoubtedly represent the zenith of his career, as he’s currently carrying a clipboard in Chicago, backing up rookie QB Justin Fields and opening-game starter Andy Dalton, who was injured in the Bears’ Week 2 victory.

It’s gotten to where Branden now hopes the Patriots will acquire Foles, so he can actively root for the guy on his thigh.