They might not be the best titles, but the two new games on the PA iLotto site suggest greater things ahead.

Pennsylvania’s iLottery has been off to a very strong start, and its prospects are only getting higher.

Launched in late May, the iLotto saw $21.6 million in sales during its first full month, despite a rather paltry assortment of games.

Since, the game lobby has swelled with the addition of two instant win titles, bringing the launch assortment of 11 games up to a lucky 13. These new additions differ greatly from the existing repertoire (and from each other), offering significantly unusual gameplay.

Ballroom Bingo stands out from typical instant games, which usually are designed to simulate scratch-cards. This game instead appears to emulate real bingo as closely as possible: 35 balls are called out (with an actual voice if playing at normal speed) one by one before the game ends. 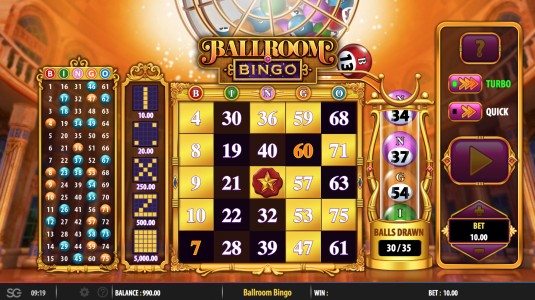 Completing a standard line in any direction results in a fairly unenthusiastic recording of someone calmly saying the word “Bingo!” but only awards winnings in the amount of the original bet. In order to profit, you need to complete a more elaborate pattern. Hitting all four corners of the card will win you double the game cost, but completing the entire card will return 500x your original wager.

The game features two alternate speed settings, “Quick” and “Turbo”, which allow you to complete your card faster. But even at the Turbo speed the game takes significantly longer than other Pennsylvania’s iLottery games, most of which are reveal games that can resolve instantly.

Ballroom Bingo appears designed to appeal to a niche audience that would rather be playing actual bingo than the lottery, but be warned: the return is on the low side for iLotto games, and the game is quite volatile, with many losses, some small wins, and only occasional significant scores.

Big Eats Little is a completely unique experience unlike any other online lottery game.

At first glance the game card appears to be a standard reveal game, with mossy squares on a 5×5 grid. However, unlike a normal scratch-off where all squares get revealed without consequence, in this game you choose only a single square to reveal, clearing away the moss and allowing a little goldfish to swim into the square. Additional squares to send the fish into become available one-at-a-time, forcing you to slowly uncover the board hoping to avoid larger fish and sharks that will eat you, ending the game. 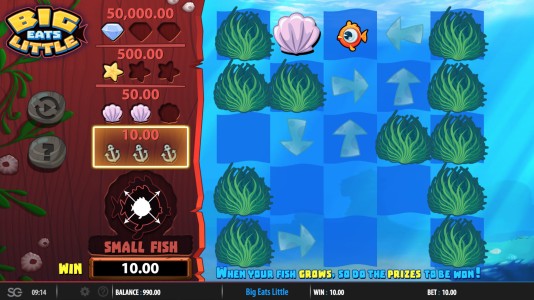 Other squares can also reveal instant prizes, symbols (match three for a set prize), or baby fish. Eating a fish smaller than yourself results in your fish growing larger, which increases the value of the symbol prizes and also makes it less likely that a larger fish will eat you. Supposedly there is a rare occurrence where you meet and kiss a fish the exact same size as yourself, unlocking a bonus as a result.

In any case, you will never outgrow the shark, and each card eventually ends unfinished.

The game requires a significant amount of interactivity for an online lottery game, creating the illusion of choice while in actuality all the results are still random and there is no way to develop a strategy that would affect the outcome. There is an autoplay feature where the game will choose and guide the fish for you, reducing the effort invested while resulting in exactly the same odds. However, even this mode is slow and time consuming, especially when compared to the usual games.

The title might resonate with extreme casuals, who don’t mind trading in higher returns for more entertainment value, but action players and value hunters are advised to steer clear.

The iLottery site has displayed confidence in its new offerings, placing them alongside Super Gems as the only “Featured Games”.

Unfortunately this confidence seems somewhat misplaced, as these games are lackluster and disappointing. This is acutely true of Big Eats Little, which really takes the word “instant” out of “Instant Game”.

Still, it is good that Pennsylvania is expanding the game library, and that it is experimenting with new and different types of gameplay. This kind of thinking is very useful for the future, even if these two examples aren’t exactly winners.