The USFL Is Coming Back In April, And Bookmakers Hope It Will Be A Hit 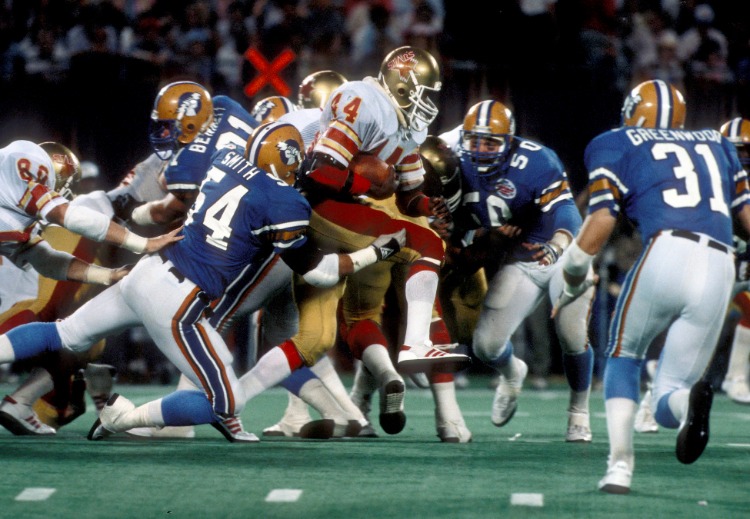 For people of a certain age, the USFL was manna from heaven — at least while it lasted.

Spring football? With a bevy of pro-quality players? A league that was competing with the monolithic NFL? Sign us up!

And “sign up” we did; while television ratings never went boffo in the three years the USFL existed, they were more than respectable for a newfangled operation, with day games on ABC getting a 6.0 Nielsen rating, and ESPN — and remember, this is 1983, when bull riding and bowling still dominated coverage on the Worldwide Leader — garnering 3.3 nighttime ratings, which was 50% higher than what the regular programming was getting.

Now you too can follow the USFL in 1984 with this cool schedule wheel! pic.twitter.com/TvaNs2k3un

Of course, we all know the story: Led over a cliff by New Jersey Generals owner — and future leader of the free world — Donald Trump, the league attempted to move its season to the fall to compete directly with the NFL. To call this idea a “spectacular failure” would be overselling the “spectacular” part. (Football For a Buck by Jeff Pearlman is highly recommended for a crash history of the league.) (But first, this NFL Today video. Wow.)

In the end, the league played three years, and featured a who’s who of future NFL talent, from Steve Young to Herschel Walker, Reggie White to Jim Kelly.

But through it all, one team stood out above the rest: The Philadelphia — and later, Baltimore — Stars.

Coached by Jim Mora, the squad made the USFL championship game all three seasons — winning two titles — and to this day, it’s a fair argument to say the most dominant pro football running back to ever play in Philadelphia is named Kelvin Bryant.

And now the Stars are back (sort of).

Return of the USFL

They are one of eight teams playing in the rebooted version of the USFL, which is owned in part by FOX Sports. The other teams — all original names from back in 1983 — are the Pittsburgh Maulers, the Michigan Panthers, the New Jersey Generals, the Birmingham Stallions, the New Orleans Breakers, the Tampa Bay Bandits, and the Houston Gamblers.

And much like the Houston franchise, “gamble” may be the key to the success or failure of this version of the USFL.

For starters, in 2022, the teams will not play in their home cities; all games will be played at one site. Birmingham appears to be a front runner.

So it will obviously be difficult to gain much home team traction when it comes to viewership — games will be broadcast on FOX, FOX Sports, USA Network, and NBC — and merchandise sales.

But where the league might meet success — and it better hope it does — is at the bookmaker’s window.

There is some history here; in 2019, the American Association of Football launched (and folded) and wagers were allowed to be placed in states where it was legal. Same thing in 2020 with the XFL. And there was also plenty of DFS action in both leagues.

Worth noting: During the AAF season, only three states allowed online sports betting; during the XFL season, there were nine. When the USFL kicks off next spring, there could be as many as 19 states offering legal online betting, and another nine offering in-person wagering.

Will bettors step up?

But just because they build it, does not necessarily mean they will come.

“In the past, these leagues have struggled to get traction at the betting counter,” said Jay Kornegay, the vice president of race and sportsbook operations at the Westgate Superbook. “It’s usually dominated by sharps that have done their research. We always hope they get the attention from the recreational player, but it’s usually tough sledding. We’ll be rooting for them.”

Odds of that happening?

“It’s tough,” Kornegay said. “Recreational bettors need to get familiar with the players and teams. Big hill to climb.”

Robert Walker, the director of sportsbook operations for USBookmaking, echoes those sentiments, though he does strike a hopeful note.

“Being able to watch it is critical,” Walker said. “Television has driven sports betting for the last 40 years. They go hand in hand. And it has to be a decent product. Look at arena football. That was kind of fun, but never really caught on with the betting public. But remember: We’re only using Nevada as the gauge, as opposed to having all these states legalized.”

Walker thinks the schedule — which calls for games on Saturdays and Sundays, with some Friday and Monday night action — also will help.

“I definitely think the games being standalone, you’ll be able to watch all four games, that’s a plus,” Walker said. “As a bookmaker, we’re obviously rooting for it to succeed. We’re hoping it works. At the end of the day, it’s up to the people.”

The league is a different animal this time around. There is no talk of competing against the NFL, no bombastic owners. It’s a tight ship, meant to be a spring football league and, potentially, a feeder for the NFL.

Undoubtedly, the memories of the truncated AAF and XFL seasons are front and center of the league’s minders, but with sports betting being so much more available — and with FOX Sports in charge — it seems likely, bordering on “crazy if they don’t,” that the league will lean into the sports betting industry in an effort to garner viewership.

In the meantime, enjoy this 1984 thriller between the Houston Gamblers and Los Angeles Express, Jim Kelly vs. Steve Young. Make some popcorn.