Villanova is a 4.5-point underdog Saturday after injury to Justin Moore 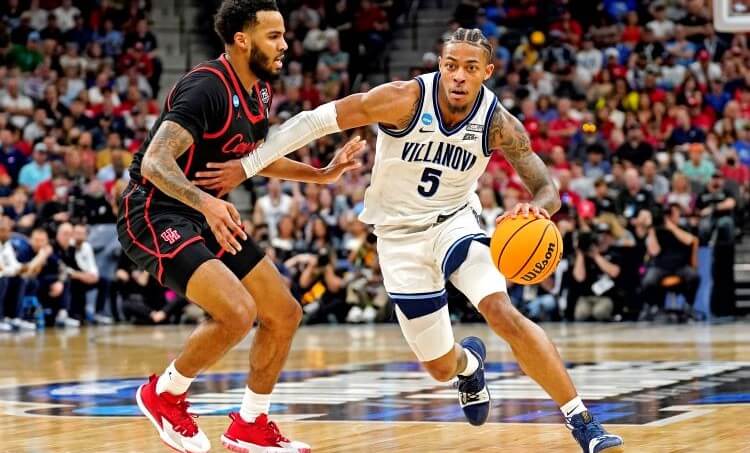 When star junior guard Justin Moore slumped to the court with a torn Achilles tendon in the final minute of Villanova’s Elite Eight win, it didn’t end the team’s chances of winning another national title — it just made it considerably more challenging.

The Wildcats, who went on to beat a tough Houston squad 50-44 with Moore watching, were a 4.5-point underdog across the board Friday morning for their Final Four matchup Saturday night with Kansas, according to Pennsylvania’s 14 online sportsbooks.

The game that follows at the Caesars Superdome in New Orleans has been getting more national attention this week because it pits Duke vs. North Carolina in the most consequential meeting of their storied rivalry, with the added import of it potentially being Duke coach Mike Krzyzewski’s last game.

But to the joy of those in the greater Philadelphia area, the first game, at 6:09 p.m., represents a chance to see a Jay Wright team move toward cutting down the nets as NCAA champion for the third time since 2016.

And Villanova fans, as well as everyone else in Pennsylvania, have an advantage over followers of the other three teams in the ease with which they can place a bet on the Final Four. Hence, Penn Bets summarizes the best betting options below.

That 4.5-point spread favoring Kansas has been consistent throughout the week. On Friday morning, the sites using Kambi odds such as BetRivers, Unibet, and TwinSpires were distinguishing themselves a tad by dropping the juice to -108 from the standard -110 to take Villanova and the points.

The Kambi sites were also offering the best moneyline price on the Wildcats, at +175, followed by Caesars at +170. The over/under on the contest’s points ranged from 132.5 (BetMGM and PointsBet, as well as the Kambi sites) to 134 at Caesars.

In addition to game offerings, all of the sportsbooks enable a futures bet on each team’s chance of winning it all, with the best payoff for Villanova being the +550 from BetRivers and the rest of the Kambi sites. Kansas’ championship odds range from +170 to +185, slightly behind those of Duke, with the best return on the Blue Devils the +160 from BetMGM.

DraftKings is also offering +550 on ‘Nova’s title odds, but as a special “boost” a customer has to be sure to use instead of its regular +450. In addition, DraftKings has mystery boosts of as much as 100% that customers can “opt in” on and utilize for straight bets on each Final Four game.

Because of the popularity of the Final Four, which the sportsbooks use as an occasion to attract bettors, it’s wise to look at the various sites before Saturday evening to see what additional incentives are being offered.

For instance, a highly attractive “Double the Spread” option is already available from Parx: Its Pennsylvania customers can take the Wildcats at +9 instead of +4.5, with the standard -110 vig.

Villanova is 4-0 against the spread

Moore led the team in minutes played during the season and was second in scoring (14.8 points per game) behind fellow guard Collin Gillespie (15.6 ppg). His spot in the starting lineup will be taken by sixth man Caleb Daniels (10.2 ppg), who is a strong backup in averaging in double figures himself, but it leaves Wright vastly undermanned on his bench, as he has mostly employed a six-man rotation.

On this highly experienced team, it will be likely up to Gillespie’s fellow senior, Jermaine Samuels (11.1 ppg, 6.5 rebounds), to step up again to help compensate for Moore’s absence. Samuels had a team-leading 16 points and 10 rebounds against Houston.

The already methodical Wildcats may also try to slow down the tempo even more than usual to adjust for their small bench against a Kansas team that averages 78.6 points per game, six more than Villanova.

KU players sat in front of their lockers Sunday at halftime, and as Bill Self walked in, they expected yelling and some curse words. They got something completely different: https://t.co/vNlGPFKtkd

Like Villanova, they are experienced, with senior starters Ochai Agbaji (18.9 ppg, 5.2 rpg), David McCormack (10.1 ppg, 6.8 rpg), and Remy Martin. Martin, a 6-foot point guard, only averaged 8.6 points while missing a substantial part of the season due to knee injury, but he was named the Midwest Regional’s outstanding player after scoring 20 against Creighton and 23 versus Providence.

If there’s a sense of déjà vu to all this for Wright and Self, it’s because they just met in a Final Four in 2018. (Gillespie, who played eight minutes in that game, may be experiencing déjà vu as well.) Villanova thumped the Jayhawks 95-79 on the way to a second national title in three years.