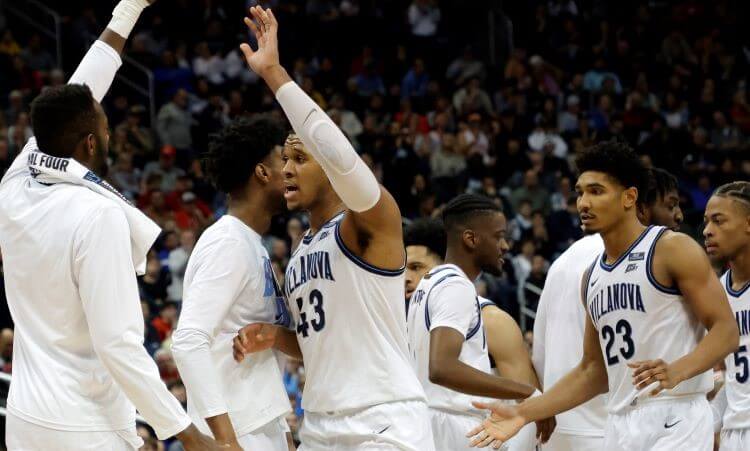 The last time Villanova played Michigan in an NCAA Tournament game in San Antonio, it was for the national title in 2018, with the Wildcats routing the Wolverines 79-62.

The oddsmakers expect their next postseason meeting in Alamo City, which takes place in the Sweet 16 this Thursday night, to be a little closer. But they also expect Villanova to win again.

Pennsylvania’s only team to make the NCAA Tournament is mostly a 5-point favorite among the state’s online sportsbooks as the No. 2 seed in the South Region, coming off victories over Delaware and Ohio State. Michigan, an unexpected foe making it this far as an 11-seed, overcame halftime deficits in the first two rounds in beating both Colorado State and Tennessee.

Whichever team wins will have a chance to make it to the Final Four by playing the winner of the Arizona-Houston matchup, a game that immediately follows Villanova’s Thursday night contest, with top-seeded Arizona a 1.5-point favorite over the Cougars.

‘Nova is clearly a bigger favorite over Michigan than it would have been over Tennessee, assuming it would have been a favorite at all vs. the Volunteers. The one sportsbook on Tuesday offering a smaller point spread than 5 on Thursday night’s game was BetMGM, at 4.5, but with inflated vig of -115 to take the Wildcats. As another alternative, a bettor could get even money at FOX Bet by laying 5.5.

The best moneyline return for a Villanova backer Tuesday was the -210 offered by DraftKings, Betway, and Caesars. Most sites had the over/under at 135, with BetMGM and FOX Bet dipping to 134.5 and DraftKings and Betway listing 135.5.

Coach Jay Wright has an experienced, steady team (28-7) riding the momentum of seven straight wins — including the three-game sweep of the Big East Tournament to make up for coming in second to Providence during the regular season despite beating the Friars twice.

The Wildcats also got to the Sweet 16 last year before falling to eventual national champion Baylor, but that was with star point guard Collin Gillespie sidelined by injury. The fifth-year senior, who was part of that 2018 national title squad, leads four Villanova players averaging in double figures with his 16 points per game, followed by Justin Moore (15), Jermaine Samuels (10.7), and Caleb Daniels (10.3).

Michigan (19-14) is in its fifth straight Sweet 16, and one area where it has an advantage over ‘Nova is height, primarily in the form of 7-foot-1 Hunter Dickinson. The dominant center scored 48 points in Michigan’s first two tournament games and averages 18.7 points and 8.4 rebounds on the season.

The big question mark for the Wolverines is the status of starting point guard DeVante’ Jones, who averages 10.4 points and 4.6 assists, but suffered a concussion in practice before the tournament started. He missed the win over Colorado State and played only the first half against Tennessee. His status against Villanova remained uncertain as of Tuesday.

Then again, Michigan didn’t need Jones in either of its big second-half comebacks. The Wolverines barely made the tournament after losing to Indiana in the first game of the Big Ten Conference tourney, but with multiple freshmen starting, Michigan is far younger than Villanova and seems to be more motivated now.

You can still get 14/1 odds on Wildcats title

The sportsbooks offer futures odds for teams to win the NCAA title or even just to reach the Final Four, and for the latter, FOX Bet Tuesday was offering a “super boost” of +300 for the Wildcats to make it to New Orleans in April. Their standard Final Four odds range from +200 to +240, with FanDuel offering the latter.

To win the national title, four to six teams have odds ahead of Villanova. A bettor can get +1400 on the Wildcats from DraftKings, Betway, BetMGM, or FOX Bet.

The oddsmakers have Gonzaga as the favorite, with odds as short as +200 at sites using Kambi odds, such as BetRivers, Unibet, and TwinSpires. Arizona, which Villanova may have to get past to reach the Final Four, has the third-shortest odds behind Gonzaga and Kansas.