Villanova Merits A Look When It Comes To NCAA Futures Betting

The rest of the state's college basketball programs are deep, deep longshots 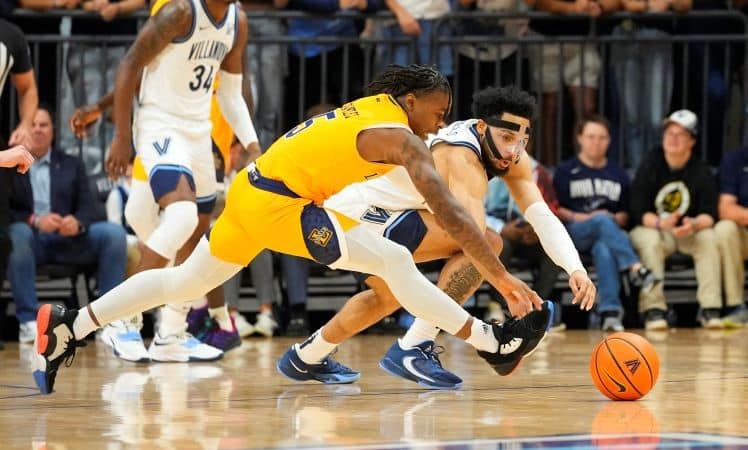 The NCAA basketball season is underway this week, and as in many recent years, when it comes to Pennsylvania teams, there is only one to focus on for purposes of futures betting.

The Villanova Wildcats have undergone a dramatic transition with the retirement of highly successful coach Jay Wright after 21 seasons and the loss of two stars from last year’s Final Four squad, but they are still ranked 16th nationally and a contender once more to win the Big East.

They’re not a favorite to win another NCAA title — odds range anywhere from 40/1 at DraftKings to 60/1 at Caesars Sportsbook, with more than 15 teams ahead of them — but no other Division 1 program in the state comes even close.

Not only do Pennsylvania’s online sportsbooks dismiss chances for the likes of Penn State, Pitt, or Temple to be a national champion, the odds show every non-Villanova school in the state to be a longshot to even win a conference title. In the most extreme example of that pessimism, BetMGM has Duquesne, Saint Joseph’s, and La Salle all at 100/1 to win the Atlantic 10.

Wright resigned shortly after the end of the 2021-22 season, leading Villanova to hire one of his former disciples, Kyle Neptune, who spent a year coaching Fordham after serving on Wright’s staff for eight years.

Just 37 years old, Neptune inherits a program that has plenty of returning and incoming talent, even if longtime stalwarts Collin Gillespie and Jermaine Samuels have moved on. Three players, in fact, were named to the preseason All-Big East second team: Caleb Daniels, Justin Moore, and Eric Dixon. And 6-foot-7 newcomer Cam Whitmore was voted preseason Big East Freshman of the Year.

The only problem with those designations is Moore and Whitmore are recovering from injuries and the timing of their return to the court is uncertain.

Daniels, himself playing with a mask due to suffering a broken nose last month, seemed unfazed by talented teammates’ absences in scoring 24 points with 10 rebounds in the Wildcats’ 81-68 win over La Salle to open the season Monday. Dixon added 20 points.

That pair represent the nucleus, for now, of a team rated just behind Creighton, ranked ninth nationally, in odds to win the Big East. The best payoff for a Villanova supporter making that futures bet would be the +300 offered by Caesars.

Creighton is +190 at Caesars, but is as strong a favorite as +160 at Barstool Sportsbook, BetRivers, betPARX, and Unibet. Those same sites would be the best place for a bet on the Wildcats to reach the Final Four again, with odds of 15/1 compared to FanDuel’s less rewarding 9/1.

Villanova’s next game is against another local rival in visiting Temple Friday night. The Owls should offer a bigger test than La Salle did to indicate just where the Wildcats stand while shorthanded to start the season.

Long odds indeed on the rest

Temple is viewed as a middle-of-the-pack team in the AAC, which is more than can be said for other Pennsylvania schools in the conferences on which the sportsbooks offer futures odds.

Caesars gives the Owls, who actually lost their opener to Wagner 76-73 on Monday, enough credence to make them 25/1 to win their conference. At 45/1, FanDuel offers a much better return for that potential surprise.

Among other schools with longer odds, Penn State can be bet at 60/1 at Caesars to win the Big Ten, and FanDuel offers 250/1 on Pitt to win the ACC.

Some of the sportsbooks also offered odds before the season started on some of the minor conferences, with Penn favored to finish first or second in the Ivy League, but those betting options have now disappeared from the sites.