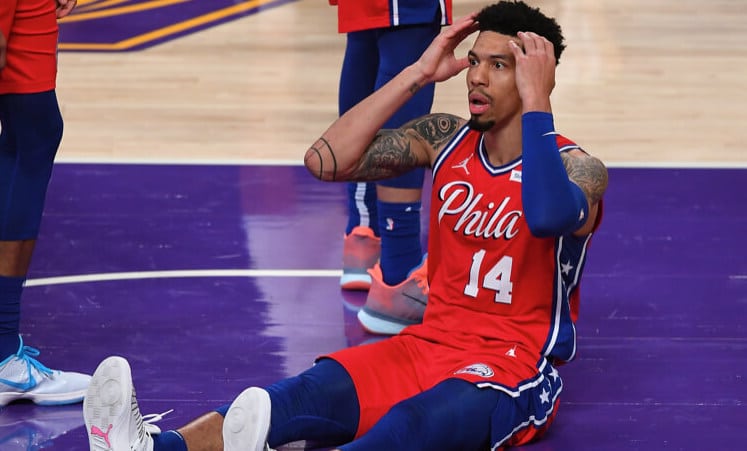 Welcome to the inaugural edition of “Who Would Have Won?,” a recurring column that will appear on Penn Bets and other sports betting sites in the Better Collective network. In each column, we’ll take a pair of notable teams or athletes from different eras and pit them against each other from an oddsmakers’ standpoint.

That’s how Philadelphia 76ers center Moses Malone famously responded when asked how many games it would take his team, which had gone 65-17 during the regular season, to march to the 1983 NBA title. He meant “four” with each utterance of “fo,” meaning he predicted the Sixers would go 12-0 in the playoffs. (Back then, there were only three playoff rounds.)

Amazingly, Malone’s outlandishly confident forecast came within one Eastern Conference semifinals loss to the Milwaukee Bucks of being precisely accurate. In the NBA Finals, the 76ers swept a Lakers team led by Magic Johnson and Kareem Abdul-Jabbar — the same Los Angeles squad that claimed the title by defeating the Sixers 4-2 in the finals the prior year.

But that ’82-’83 Sixers team was not the same. Before the season, the team traded sometime-starter Caldwell Jones and a first-round pick to the Houston Rockets for Malone — a significant upgrade, to put it mildly. (The 76ers also shipped Darryl Dawkins to the Nets during the same stanza.) Julius Erving was still around, but he no longer had to shoulder the bulk of the scoring load with Malone manning the block. Rounded out by a deep, stellar supporting cast that included Maurice Cheeks, Andrew Toney, Bobby Jones, Clint Richardson, and a serviceable white stiff, Marc Iavaroni, the Sixers were a force to be reckoned with.

Imagine, though, that we could pit the ’82-’83 76ers against another NBA champion from Los Angeles: the 2008-2009 Lakers, led by Kobe Bryant, Pau Gasol, and a (barely) pre-Kardashian Lamar Odom. What sort of odds could sports bettors expect to get on such a seven-game series?

Luck be a Laker

Like the ’82-’83 Sixers, the Lakers finished with a 65-17 regular season record. Unlike the Sixers, luck played a fairly large role in their ability to secure the O’Brien Trophy. They required seven games to squeak by an Aaron Brooks-led (!!!) Houston Rockets team that was without superstar Tracy McGrady in the Western Conference semifinals (Yao Ming also missed four of the series’ seven games), and they never had to face the defending champion Celtics — who had defeated the Lakers in the finals the year before — due to an injury to Kevin Garnett that dashed Boston’s hopes of repeating.

The Lakers’ luck didn’t end there: In the finals, they faced the Dwight Howard-led Orlando Magic, who had vanquished LeBron James and a typically woeful Cavaliers supporting cast on account of some lights-out shooting in the Eastern Conference finals. Howard in his prime (now a Laker for a third time) aside, that Magic squad was led by the likes of Rashard Lewis, Rafer Alston, Mickaël Piétrus, and Hedo Türkoğlu — perhaps the most umlauted roster in NBA history. The Lakers took the finals in five games, but the series was “a lot closer than that,” said PointsBet Head of Trading Jay Croucher.

When determining what odds he’d offer on an NBA Finals matchup between the ’82-’83 Sixers and the ’08-’09 Lakers, Croucher first qualified his hypothetical handicapping by saying, “The caveat is that any team from 2009 would dominate a team from 1983 just because of the difference in modern athletes.”

“It’s not even about the athletes as much as it is the strategies — the understanding of the three-point shot versus back in the ’80s, when they didn’t even shoot the three,” said Murray. “I think the biggest problem the older teams would have is they’d see a guy pull up for three from way behind the arc and say, ‘Have at it.’

“When I was a kid, the Magic, with Shaq and Penny and Dennis Scott and Nick Anderson, they were known as the three-point gunners — and they shot the three less than the last team in the NBA now.”

Ultimately, Croucher concluded, “We’d make the Sixers about -200 favorites relative to era. Philadelphia went 12-1 in the playoffs and swept that Magic-and-Kareem Lakers team. That level of dominance just puts them in a different tier than the 2009 Lakers team. I just remember [the Lakers] making such hard work of a series they shouldn’t have.”

‘Wait, this isn’t even close’

Unlike Croucher and Murray, veteran Vegas oddsmaker Dave Sharapan thinks Moses’ Sixers would spank Kobe’s Lakers regardless of era, in part because he thinks Malone would manhandle L.A’s twin tower tandem of Gasol and Andrew Bynum.

“Who in the hell is gonna stop Moses Malone?” wondered Sharapan, who co-hosts Sports Handle’s “Get a Grip” podcast. “I don’t think the Lakers would have an answer. I think it’s a bad matchup. I’d take my chances with Dr. J against Kobe — that’s a pretty good matchup. And I think the Sixers are deeper. That Sixers team played as a team so well. I just remember their bench. It just seemed guys would come in and out and they’d score.

“Over the course of a series, I think the Sixers would win, and with home court, they’d be a pretty heavy favorite. But if we’re in Vegas and getting that Lakers money we always get, we’d have to keep it a little lower. On a neutral court, I don’t think it’s as high as 2/1, but it might be. If we’re playing it closer to the Sixers’ era, that’s even more to their advantage. I think it’s the Sixers and it’s significant. When you look up and down the roster, you say, ‘Wait, this isn’t even close.'”