Penn National Gaming announced Thursday that the company received approval from the Pennsylvania Gaming Control Board for a live, real-money soft launch of the Barstool Sportsbook mobile sports betting app, clearing the way for Barstool’s Keystone State debut on Sept. 18.

At the same time, the company released several digital images of the physical app providing a glimpse of the product’s design before next week’s launch. The images, obtained by Penn Bets, present a harbinger of some of the unique gambling offerings the company plans to offer via the much-hyped app. While Barstool Sportsbook is not legally allowed to accept wagers on Friday’s Game 7 showdown between the Boston Celtics and Toronto Raptors, the renderings detail several potential lines associated with the matchup. 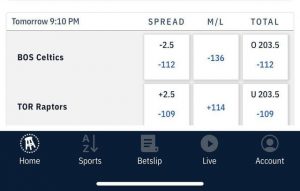 Back Brandon or fade the Barstool expert?

Prior to the soft launch, Penn National dropped hints in recent weeks that the Barstool app will feature a host of unique sports betting experiences, including the opportunity for bettors to go head-to-head versus Barstool Sports founder Dave Portnoy, Brandon Williams, and others from the company. A feature dubbed “Bet with Brandon” allows bettors to track Williams’ selections.

The feature gives a bettor an opportunity to try to build a bankroll through Williams’ picks, or take a contrarian view by “fading Brandon.” While an experience to bet against Portnoy or Williams may be viewed as a differentiator, at least for now, it is important to note that the app is powered by European tech provider Kambi. At the moment, Kambi provides managed trading services for more than half of Pennsylvania’s nine active online operators.

Only 1x Wager Applies, Playable in PA Only 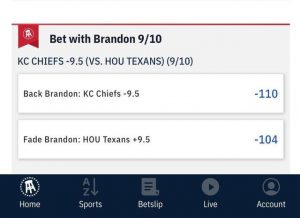 Since the historic PASPA ruling in May 2018, sportsbooks nationwide have offered a wave of promotions in an attempt to acquire and retain customers. One rendering indicates that Barstool may offer a small welcome bonus to new customers, beginning next week.

The app appears to be easy to navigate with quick access to markets on the NFL, NBA, and MLB, as well as in-game betting markets. Barstool has not provided any details on a “Quick Pick 6” feature that is also displayed prominently on the app. 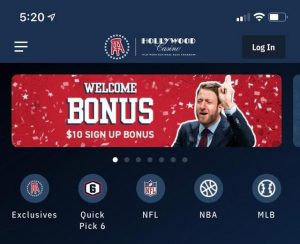 The companies are also ramping up the promotion of the Barstool app on social media. With all four major North American pro leagues in action on Thursday night, Barstool flooded its gambling Twitter account, Barstool Bets, with touts, GIFs, and game highlights.

Penn National is scheduled to begin a three-day soft launch of the Barstool App on Sept. 15.