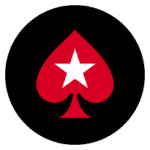 PokerStars PA
86
* Please note - Our star ratings are based on our personal opinion of the gambling sites we work with. We also take customer feedback into account in our rankings.
$50 FREE PLAY OR $600 DEPOSIT MATCH

When most people think about online poker, there is only one name that comes to mind, PokerStars. PokerStars has dominated the international market since the early 2000s, and has now made its way back to the US via states like Pennsylvania.

PokerStars is run by The Stars Group, who owns and operates the online poker room in addition to FOX Bet online sportsbook and PokerStars Casino. PokerStars is able to operate in Pennsylvania via a partnership with Mount Airy Casino and is licensed by the Pennsylvania Gaming Control Board.

Let this page be your guide to everything you need to know about PokerStars PA including what types of games are available, how to make deposits and withdrawals, and how to claim the top bonus offers.

What bonuses do PokerStars PA offer?

PokerStars offers new customers a choice of either a $50 free play bonus or a 100% deposit match up to $600 to get started. Wondering how to claim these bonuses? Just follow the directions below.

When you register for a new account you have the choice of either a $50 free play or a 100% first deposit match with a maximum bonus amount of $600. The $50 free play is simple to unlock. After sign up, opt-in for the offer via the ‘Challenges’ window. Next, you just need to play one real money cash game hand within 5 days of creating the account. Once completed you’re eligible for the $50 free play. On day 1 you will receive two separate $5 Spin & Go tickets. On day 3 you will pocket two more $5 Spin & Go tickets and a $10 ticket. Finally, on day 5 there are two more $10 tickets on the way. When all is said and done, it’s $50 in free tickets to use on PokerStars PA.

In order to convert the bonus funds to real cash, you will need to put it in play. For every $1 you pay in rake or tournament fees, you will get 5 redemption points. For every 140 redemption points, $10 will be released from your bonus balance to your cash balance. If that seemed overly complicated and slightly confusing, you are not alone. To simplify the math, it basically breaks down to every $28 paid in rake or tournament fees, $10 in bonuses will be released. It is important to note, that you have four months from the time of the deposit to clear the bonus funds.

PokerStars online poker is available in Pennsylvania via a desktop client or on your favorite mobile device via apps for both iOS and Android-powered devices. 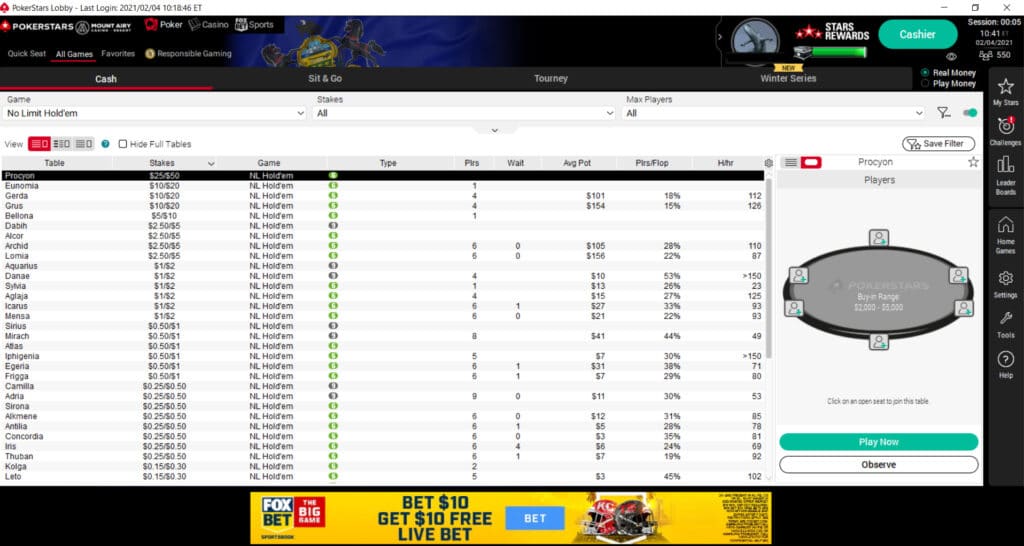 PokerStars downloadable desktop client is modern, sleek, and intuitive. Tabs across the top of the screen lets you toggle between cash games, sit and goes, tournaments, and special events. PokerStars allows you to filter games by buy-in level, stakes, and poker variant. The right side of the client gives you access to all your settings, bonuses, and help options.

The desktop client also includes the PokerStars Casino and FOX Bet online sportsbook, and can easily be toggled back and forth so you can play some slots or blackjack while on a tournament break. 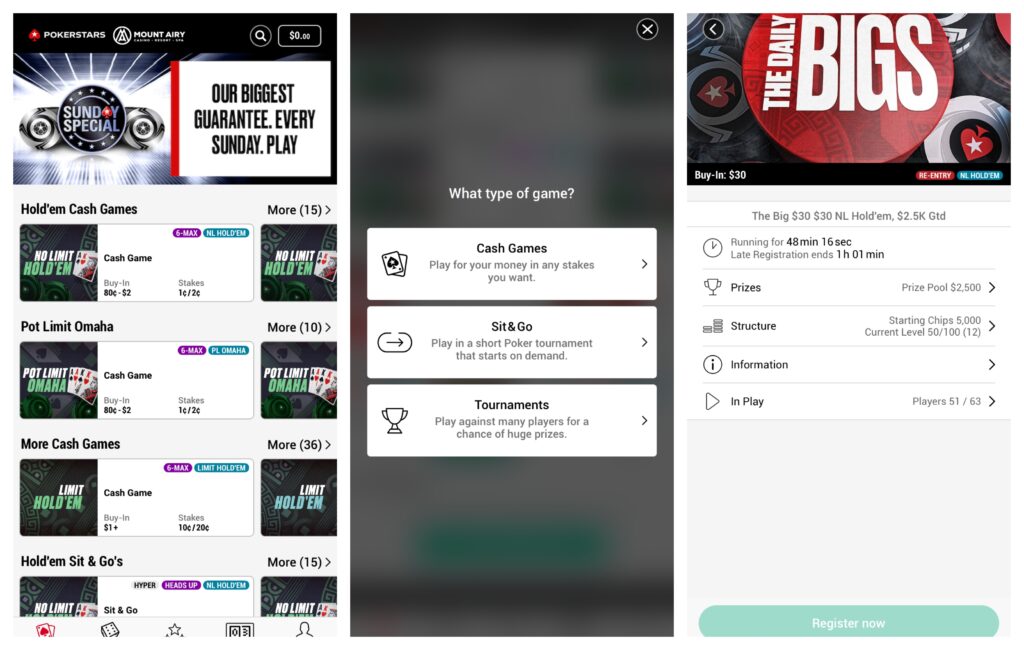 The mobile app is more than just a shrunken down version of the desktop client. It is well designed to make sure that you get all same poker action on your mobile device that you would on the desktop. No other online poker site comes close to the organization and ease of use as the PokerStars mobile app.

The PokerStars PA mobile app is available for both iOS and Android. It utilizes the GPS on your phone to verify that you are still located in the commonwealth before permitting real money play. The mobile app allows you to play multiple games at once and will alert you when it is your time to act. The PokerStars mobile app also gives you access to the FOX Bet online sportsbook and PokerStars casino, just like the desktop client.

PokerStars offers tournaments running 24/7 with the highest volume of games running in the evening. Tournament buy-ins start as low as $0.10, and go all the way up to hundreds of dollars in their normal weekly schedule. Many tournaments have guarantees attached to the prizepool, and most tournaments spread Texas Hold’em though there are a few Omaha and other variants mixed in. PokerStars offer turbo structures, six max, rebuys, bounties, and hyper-turbo tournaments, too. Between all the buy-in, structure, and game variants, there is genuinely something for everyone.

For tournament poker players, Sunday is the biggest day of the week, and PokerStars does not disappoint with their full slate of Sunday Majors. With buy-ins ranging from $10 up to $100 and guarantees running upwards of $50,000, there is a tournament for every size bankroll and skill level.

PokerStars often runs special tournament series including the annual PACOOP. The PACOOP (Pennsylvania Championship of Online Poker) runs over a two week period and boasts more than a million dollars in guaranteed prizes. The series culminates in a massive Main Event – one of the most prestigious, and lucrative, tournaments in the state.

PokerStars spreads cash games starting at just $0.01/$0.02. At the other end of the spectrum, the sky is the limit. The most popular game running is No Limit Texas Hold’em, but PokerStars offers a slew of game options including Limit Hold’em, Limit Omaha, Pot Limit Omaha, 8 Game Mixed, 7 Card Stud, 5 Card Stud, and some more niche games like Badugi and 2-7 Triple Draw. The cash game lobby is similar to the tournament lobby in the number of filter options that include game type, stakes, and table size.

Cash games tend to be more convenient as you can start and stop at your leisure. Whether you play for ten minutes or ten hours, it’s up to you how long or short you play. Tournaments, on the other hand, will run until you either win, or are eliminated. With a similarly wide range of limits and options, PokerStars PA has cash games for every player.

Sit-n-gos are basically mini tournaments that start when a set number of people join. Sit-n-gos typically are heads up (2 people), 6 handed, 9 handed, 18 (two 9 person tables) or 27 (three 9 person tables), but could go as high as 180 person tournaments. Sit-n-gos are convenient if you have a little less time, but still want to play a tournament, or if you want to work on your short handed skills. Buy-ins range from $1 up to $500 and you have your choice of standard, turbo, and hyper turbo blind structures.

PokerStars is known to be an industry leader when it comes to innovation, and we have seen this on display in the international market and in neighboring New Jersey. We don’t know if and when they will carry some of these variations over the border to PA, but we would be remiss if we didn’t mention them.

PokerStars Pennsylvania has a solid VIP program known as Stars Rewards. We gave a quick explanation of the Stars Rewards Chests, but let’s delve a little deeper about how you can earn and redeem chests via the Stars Rewards program. The more you play, the more RPs (Rewards Points) you earn, and the more chests you can unlock. The program is on a 28 day rolling cycle and if you earn enough points to open multiple chests, you will then be elevated to the next tier. As you climb through the ranks the chests will offer bigger, more generous prizes. There are currently 6 tiers, and each tier is represented by a new color.

Once you achieve a certain tier level, it is locked in for the next 28 day rolling period. If you fail to meet the requirements during the subsequent 28 day period, you will be demoted a tier status. You earn 100 reward points for each $1 paid in rake or tournament fees and you can also earn points for placing bets in the PokerStars casino or FOX Bet online sportsbook.

Stars is always offering promotions to new and existing customers that include their tournament leaderboards, CardHunt, and CashMatch challenges. Most of the prizes included in these promotions award you with various chests or cash payouts for completing daily tasks such as “win a hand with the A of clubs in a cash game.”  PokerStars knows how to keep customers happy and are constantly coming up with new and exciting promotions. Be sure to check the “my challenges” tab on the right side of the screen to make sure you are not missing out on some free money.

PokerStars offers plenty of banking options to get your money on and off the site. These include:

Contacting PokerStars Pennsylvania can be a bit frustrating when it comes to finding an answer quickly. Most online gambling sites have live chat, but for some reason PokerStars has not added that feature. So you basically have two options:

Neither option really guarantees a quick reply, but typically you will hear back within 24 hours.

The parent company of PokerStars, The Stars Group, struck a deal with Mount Airy Casino to bring all three online gambling verticals to Pennsylvania. PokerStars, FOX Bet, and PokerStars Casino are able to operate in PA after being granted approval by the state after forking over the $10 million application fee.

Mount Airy Casino in Mount Pocono, PA, boasts over 1800 slot machines, 70 table games, and a sportsbook that shares space with its moderately sized poker room. All of this is spread out over 62,000 square feet of gambling bliss. Mount Airy Casino also is home to plenty of comfortable hotel rooms and suites that feature a mountain lodge theme.

Mount Airy Casino has plenty to do outside of gambling, including an 18 hole golf course, day spa, Get Wet Ultra Pool, and several bars and restaurants. Mount Airy sits in the Pocono Mountains and is just a stones throw from some of the best skiing and snowboarding in the region.

PokerStars PA Verdict
Bottom Line
PokerStars is the top online poker room in the world, and they brought their amazing software, banking options and game selection to the PA market. Being the first to go live in PA gave them a distinct advantage and their tournament and cash game selection is second to none. PokerStars could stand to offer more customer service options and possibly add an additional banking option, but overall, PokerStars brought their A-game to the Keystone state.
The Good
The Bad
4.3
Overall Rating
Special Bonus Offer
GET THE BONUS

Ryan Gutzler is a Pennsylvania-based gambling analyst who has worked in the gaming industry since 2007. He is an expert on the U.S. online sports betting and casino markets and is a frequent contributor to a variety of industry publications.

Ryan Gutzler is a Pennsylvania-based gambling analyst who has worked in the gaming industry since 2007. He is an expert on the U.S. online sports betting and casino markets and is a frequent contributor to a variety of industry publications.