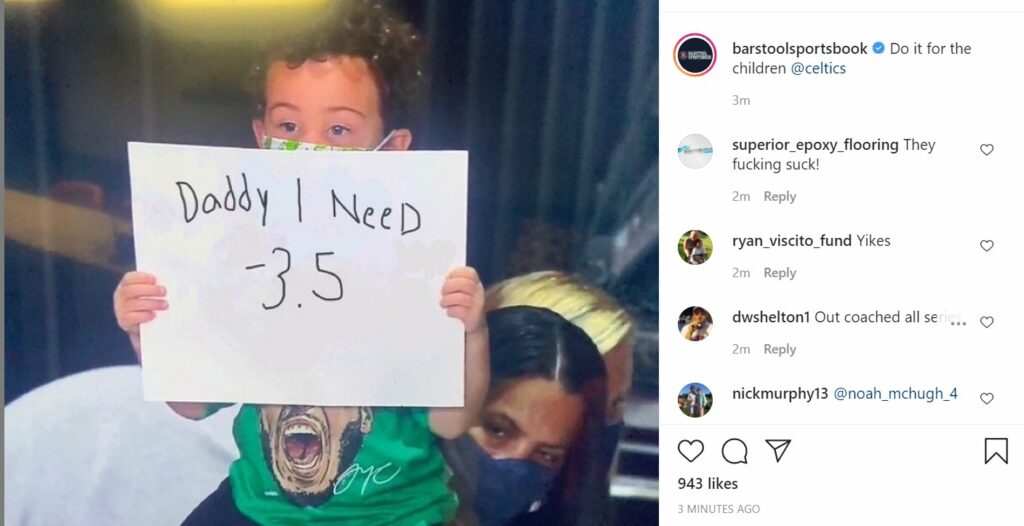 One of Pennsylvania’s newest online/mobile sportsbooks raised some eyebrows recently over a social media post involving a child.

Late last month, Barstool Sportsbook, a product from Penn National Gaming, posted a photoshopped image of a young child holding a sign that read: “Daddy I need -3.5.” The caption said, “Do it for the children.” The content was later deleted from the sportsbook’s Instagram account.

In Pennsylvania the legal age for sports gambling is 21.

The content was first spotted by a veteran gambling industry journalist and analyst.

Hey there @PAGamingControl, me again. This is one of your operators using images of children to market to their customers. Pretty sure this is a regulatory problem. pic.twitter.com/2U0nsBEaqH

The Oregon Council on Problem Gambling, among other responsible gambling advocates, drew attention to the post from Barstool Sportsbook, as well as a piece of unrelated content from The Action Network, a media/marketing company, that also featured children.

They deleted it. We didn't miss it. Isn't it about time we talk about how gambling is advertised in the U.S.? pic.twitter.com/3I76UnRkfn

Pennsylvania is currently Barstool Sportsbook’s only state, as regulators in other jurisdictions are expected to soon allow its launch within their respective borders. PNG, which acquired a little more than a third of Barstool Sports this year in a deal worth $163 million, has brick-and-mortar casinos across the U.S.

The Pennsylvania Gaming Control Board, the state agency responsible for regulating all forms of gambling offered by casinos, declined to comment on the Barstool Sportsbook content.

“We are aware of advertising by casinos and internet gaming operators and address it when we believe it to be inappropriate,” PGCB spokesperson Doug Harbach told Penn Bets in an email. He said the PGCB “won’t comment specifically on this ad.”

The PGCB did point to the following online gambling regulation that covers content used by gambling operators for advertising purposes:

operator licensees may not:

(1) Consist of indecent or offensive graphics or audio, or both.

(2) Obscure the game play area or obstruct a game in progress.

(4) Specifically target players which have been excluded from play.

It’s unclear if the Barstool Sportsbook Instagram post would be in violation of the regulation, but it undoubtedly appears to test the boundary, specifically with regard to requirement No. 4.

In a statement to Penn Bets, PNG explained what happened with the content.

“The Barstool Sportsbook Instagram profile posted an image it erroneously believed was a screenshot of a television broadcast of a Miami Heat/Boston Celtics playoff basketball game,” Eric Schippers, senior vice president of public affairs and government relations for PNG, said via email.

Sports betting has gone mainstream in the two-plus years since the U.S. Supreme Court overturned a 1990s federal law that effectively limited single-game, traditional sports gambling to the state of Nevada. The lucrative opportunity for the gambling industry isn’t without some risk for people living in a state where the wagering platforms are legal and widely advertised.

That’s where state regulation comes in. However, the sports gambling industry is also operating under some self-regulation, according to the National Council on Problem Gambling, an advocacy group based in Washington, D.C. That poses some challenges for responsible gambling advocates.

“Everyone in the sports betting ecosystem — from operators to vendors, affiliates to sports media, professional and amateur leagues and teams — needs to understand that children should not be used to promote gambling,” Keith Whyte, executive director for the NCPG, told Penn Bets. “Gambling is an age-restricted activity for a number of reasons, including because it is addictive. We know from decades of research the earlier someone starts gambling the greater their risk of developing a gambling problem. Using kids to tout sports betting exposes them to harm as well as likely violates industry conduct codes and state gambling regulations.”

According to Whyte, sportsbooks can use a relatively simple trick to gauge whether advertising-related content is either potentially in breach of state regulations or the casino industry’s “conduct codes” of self-regulation. In mid-September, not long before the Barstool Sportsbook social media post involving a child, the American Gaming Association, of which Penn National Gaming is a member, published “responsible marketing” codes for sports wagering.

One bullet point from the AGA’s conduct codes reads: “No sports betting message should be designed to appeal primarily to those below the legal age for sports wagering by depicting cartoon characters or by featuring entertainers or music that appeal primarily to audiences below the legal age within the jurisdiction. Nor should any message suggest or imply that underage persons engage in sports wagering.”

While it’s unclear if the Barstool Sportsbook post violates the regulations in the Keystone State, it does appear to contradict that self-regulation guideline.

“The recent uses of children in gambling-related marketing also calls into question industry self-regulation,” Whyte said. “It’s not clear if current social responsibility codes apply, if they will be enforced, or if they will change behavior and protect kids.”

According to Whyte, the nascent U.S. sports betting industry would be wise to think of gambling advertising like alcohol and tobacco, as a rule of thumb.

“A good informal guideline for stakeholders is to substitute ‘alcohol’ or ‘tobacco’ for gambling when thinking about what is socially appropriate and oriented towards adults, not children,” Whyte said. “People are much more attuned to underage considerations with these other adult products and this may help prevent missteps. Most people would immediately understand that a show titled ‘Smoking With Children’ or editing a screen grab to show a kid holding a sign promoting Jose Cuervo is a bad idea.”