Woods remains a longshot, but his odds are shortening 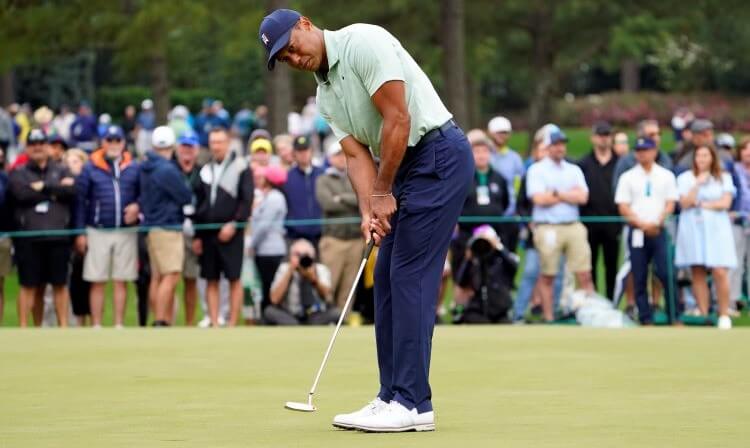 The days of golfing for Pennsylvanians have been few and far between thus far this spring, due to either wet or shivery conditions, but Mother Nature can do nothing to deter betting on golf.

And nothing draws a golf bettor’s attention better than The Masters, a much-welcomed rite of spring when combining glorious TV coverage of a fabled course with sportsbook operators’ wide-ranging betting options and incentives.

The return of Tiger Woods to competitive golf — on the 25th anniversary of winning his first major by 12 strokes at Augusta, at age 21 — only heightens anticipation for the biggest sporting event since … um … Monday night? (And Jim Nantz gets to announce them both? How many orphaned babies did he rescue off a sinking boat to earn that parlay?)

Every year I think about how Jim Nantz gets to call the national championship game and then The Masters in the course of a single week. What a lucky bastard.

The state’s 14 online sportsbooks have taken note of Woods’ planned return from horrific leg injury by including him in some of the many special promotions being offered to encourage betting on The Masters. That’s in addition to the vast number of straight betting opportunities that many fans of his are already taking advantage of, which has resulted in his odds of winning getting shorter to reduce the books’ liability if the rehabilitated 46-year-old pulls off a miracle on Sunday.

Rahm and J.T. are the favorites

Sportsbooks universally have Jon Rahm as the favorite to win among the 91 in the field, with many listing him +1100 Tuesday afternoon and DraftKings and Betway going down to +900. If you’re a Rahm believer, best to use FanDuel at +1200.

Behind those two are a pair of younger players with no major wins but who have stood out on the PGA Tour this year — Cameron Smith and Scottie Scheffler. They both can be had for +1600 at FOX Bet and PointsBet PA, which is an advantage for their backers over most sites.

The next tier of favorites consists of Dustin Johnson, Rory McIlroy, and Viktor Hovland, who all can be had at +1800 at BetMGM.

The beauty of golf betting, however, is that you don’t have to take that 1-in-91 stab at being right by picking the single winner. There are all kinds of options to pick players to finish in the Top 5, Top 10, Top 20, to make or miss the cut, or to be the top-finishing Asian, or best lefty, or outstanding past champion. You can also pick a golfer in head-to-head matchups that are offered, such as FanDuel listing Brooks Koepka as a +108 underdog to finish ahead of McIlroy (-142).

Such options are where line-shopping among the various sites can be valuable. For instance, while FanDuel offers a better payout to bettors taking favored Rahm or Thomas to win the tournament, DraftKings would be a better site to make a Top 5 finish wager on Rahm (+115), Thomas (+130), Smith (+140), or Johnson (+170).

And as something of the Super Bowl of golf in terms of prop betting, there are far more opportunities than in a regular tournament for more exotic options such as whether an American will win (DraftKings offers -120 for the “yes”) or if there’ll be a hole-in-one (-175 to bet the “yes” at DraftKings).

Promos? You bet we got promos

In addition to the wide-ranging options under their Masters betting categories, nearly every site is advertising some kind of special boost or other promotion to grab attention and betting dollars. Here are some worth considering, and more might be added before the first golfers tee off at 8 a.m. Thursday:

And then there are the Tiger options

Woods, naturally has been receiving plenty of attention from golf media and fans, translating to interest from the sportsbooks and bettors. He gave his biggest assurance yet Tuesday that he is healthy and plans to tee off Thursday morning.

Tiger Woods on his status for the Masters: "As of right now, I feel like I am going to play." pic.twitter.com/srUztCj16i

Rush Street Interactive, which operates both BetRivers and PlaySugarHouse, publicized early Tuesday afternoon that with his longshot odds at the time of 50/1, he had attracted the fourth-most bets from its customers — more than Scheffler with his No. 1 world ranking, or popular Jordan Spieth with his 2015 Masters win and Top 3 finish last year.

And as elsewhere, Woods’ odds shortened throughout the day as more and more of your average Joe bettors — though not necessarily betting sharps — jumped on the Tiger Bandwagon. By Tuesday evening, five hours after Rush Street’s press release, its sites had shortened his odds to pick up a sixth green jacket to 40/1. His odds to finish Top 5 changed to 8/1 from 10/1, and to finish Top 10 changed to +350 from the earlier +500.

As it’s been more than a year since Woods’ last competitive golf at the PGA level, it might simply be a success for him to make the cut, which will be a little more than half the field. Most of the sites make him a slight favorite to do so.

If you like Woods’ chances of playing into the weekend, PointsBet is the site with the best offer — a special boost to +125 (from -105). (If you want to bet against him making the cut, BetMGM’s -105 was the best choice Tuesday afternoon.)

And whether you’ve got a bet on him or not, one thing for certain is that Woods’ participation on Sunday will make an already hyped-up event just that much more intriguing — all with the help of Jim Nantz’s voice, of course.