Hurts So Good? He’d Better Be If Eagles Are Hoping To Contend 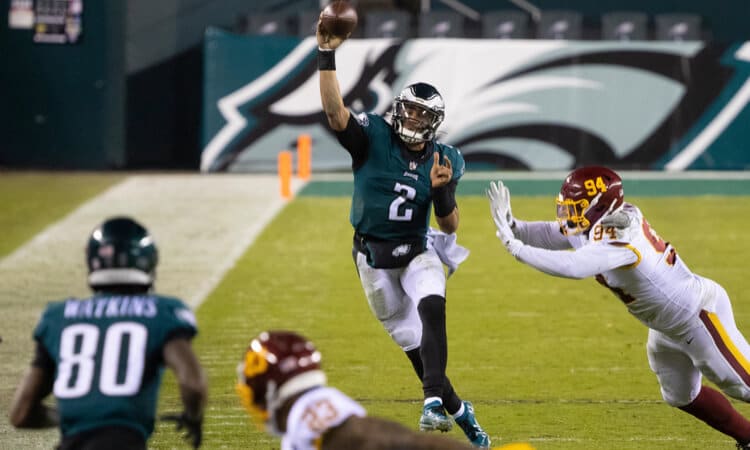 In September 2018, the defending Super Bowl champion Philadelphia Eagles opened their title defense, and the entire NFL season, with a Thursday night game against the Atlanta Falcons, themselves just a year-and-a-half removed from a Super Bowl appearance. These were NFC powerhouses in a marquee game, a rematch of a playoff battle from eight months earlier.

When the Birds and the other birds kick off their 2021 seasons against each other this Sunday at 1 p.m. in Atlanta, the spotlight will shine considerably less brightly. Based on the odds and expected win totals posted by Pennsylvania’s regulated sportsbooks, it’s the No. 3 team in the NFC South hosting the No. 4 team in the NFC East.

In a sense, the stakes are lower for the Eagles as they open this season than they’ve been in years. But in another sense, they’re extremely high. New head coach Nick Sirianni isn’t on the hot seat just yet, but second-year quarterback Jalen Hurts is, as the Eagles have serious draft capital to try to land their QB of the future in 2022 if the 23-year-old out of Oklahoma/Alabama doesn’t make his case this season.

And though the Iggles come into this 17-game campaign with the easiest schedule in the league based on 2020 records, that soft schedule includes a hellish start. They play the San Francisco 49ers in Week 2. They’re in Dallas — against a Cowboys team that looked like a contender in nearly upsetting Tampa Bay on Thursday night — on Monday night in Week 3. They play the Kansas City Chiefs on short rest in Week 4. Then comes a winnable road game in Carolina, but that’s followed by a meeting with the defending champ Buccaneers that will represent the Eagles’ third game in 11 days.

Sunday’s opener in Atlanta is the Eagles’ best shot to avoid an 0-4 start, and possibly even an 0-6 start and an early end to the Hurts era.

According to the sportsbooks, that road win is doable, but not likely. The spread, as of Friday morning, was Eagles +3.5 at most books, with a couple of +3s. If you want that extra half-point, both Betfred and BetMGM offer the lowest juice, a standard -110. (Other books have the +3.5 at -115.) At the +3 number, FanDuel is offering +102 incentive to bet the Eagles.

If you want to take the Falcons side, whether because you’re not an Eagles fan (boooo!) or as an emotional hedge (acceptable), Betfred offers -3.5 at even money and Caesars PA has the best -3 price at -120.

On the moneyline, DraftKings Sportsbook is undoubtedly the best place to back the Eagles, with our Birds priced at +160 — much better than the low of +135 you’ll find at FOX Bet. Unsurprisingly, FOX Bet is the best site at which to bet on the Falcons to win outright, with a price of -163.

Then there’s the point total. It’s set at 48.5 at every PA book except FOX Bet, where it’s 48. With normal -110 juice on both sides at FOX Bet, that is definitely the app to use to bet the over. If you’re looking to go under, you may as well take FanDuel up on their offer of -104 juice under 48.5.

Speaking of FanDuel, their data on the betting thus far is not encouraging for Eagles fans — although public money is not necessarily smart money. FanDuel reports that 59% of spread bets and 55% of spread money is on the Falcons; 58% of moneyline bets and 69% of moneyline handle is on Atlanta; and that bettors are loving the over, with 62% of bets and 83% of money going in that direction.

Week 1 props, and a possible mispricing

Of course, team-based bets are not the only way to wager on a game. There are endless player props to choose from, and if you believe in the Atlanta passing game against an exploitable Eagles secondary or in the talent of Philly first-round draft pick Devonta Smith, there are some tempting overs.

Here are some air yardage totals at DraftKings (remember, if you spot one you like, shop around and see if there’s a lower number or better juice elsewhere):

We aren’t seeing any spectacular Eagles-Falcons boosts or promos just yet, except maybe this one at FOX Bet, which seems mispriced: The site is offering a boost on the Eagles to win in Week 1 and the rest of the NFC East to lose, boosted from +1100 to +1400. The thing is, if you hand-build a three-team moneyline parlay of Eagles over Falcons, Chargers over Washington, and Broncos over Giants, you get odds of +699. So did the starting price of +1100 maybe include the Cowboys losing on Thursday to Tampa, and FOX Bet just hasn’t taken the bet off the board yet? That appears the most likely explanation. All you need to know is that the bet was accepted as of the writing of this article, so if you’re in PA, you might want to jump on this one quickly.

FOX Bet also has one semi-interesting season-long Eagles boost on Hurts to throw for 25 or more touchdowns and toss 10 or fewer interceptions, boosted from a purported starting price of +600 to +900. If Hurts keeps the job all season, 25 TDs in 17 games should be a favorite. But a sophomore slinger putting up a single-digit total for picks is usually a longshot.

Looking for more traditional futures plays on the Birds?

The biggest payout on them to win the Super Bowl is 100/1, available at BetMGM, DraftKings, and Betfred. A more modest expectation to merely win the NFC is worth 50/1 at those same three books. (Only the Detroit Lions have longer odds.) Those same three sportsbooks, plus FOX Bet, pay +500 on the Eagles winning the NFC East. A “yes” bet to make the playoffs pays +300 at DraftKings.

As for their win total, the books see these Eagles as a 6-11 or 7-10 team, with every operator setting their line at 6.5. There’s a lot of juice on the over, with DraftKings offering the best value at -140. If you dare to root for the Eagles to lose a lot and for Hurts to fail and get replaced by an even younger model in 2022, under 6.5 wins is goosed to +130 at Caesars and Betfred.