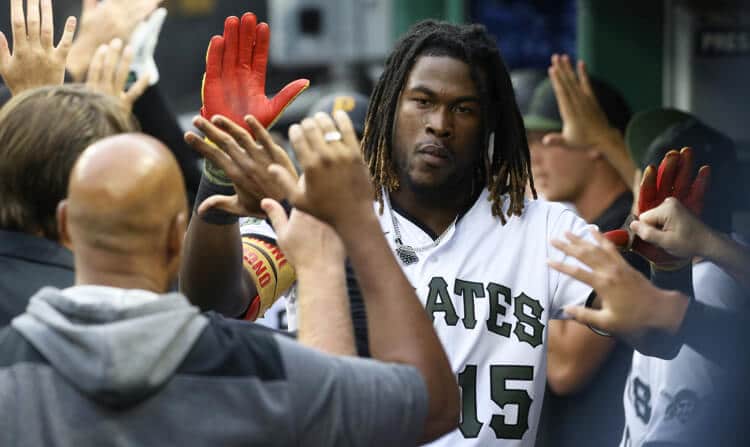 There was a time in early June, when towering shortstop Oneil Cruz was hitting under .240 in AAA Indianapolis with no imminent call-up to the majors slated, when he could be bet at 40/1 odds to be the National League’s Rookie of the Year.

Welp, those days are gone, and they presumably ain’t coming back.

Within a day or two of joining the Pirates June 20, the 23-year-old phenom was back to the ranks of front-runners for the award, just as he was before the season started. On Monday morning, FanDuel was offering the longest odds for Cruz of any of Pennsylvania’s online sportsbooks, at +500. (The shortest was BetMGM, at +375.)

3 innings into his 2022 debut, @Pirates' Oneil Cruz has registered:

With a dazzling burst onto the MLB scene that is belied by his mundane .250 batting average, Cruz is part of what is now a highly competitive race in terms of the odds on who will become the NL’s top rookie, with San Diego Padres pitcher MacKenzie Gore, Atlanta Braves outfielder Michael Harris, St. Louis Cardinals second baseman Nolan Gorman, and Braves hurler Spencer Strider all in the mix.

And Pirates fans — especially those who bet on him a few weeks ago at 100/1 odds — also don’t want to count out outfielder Jack Suwinski, who leads all rookies in home runs (12) and is now between 17/1 and 20/1 at various sites.

The numbers dazzle, in multiple ways

As noted by Penn Bets before the season started, Cruz had the top odds among NL rookies before he was demoted to the minors before the end of spring training. Even then, he had strong odds (+420 at FanDuel on March 30), but those gradually faded as he scuffled against AAA pitching in April and other rookies performed strongly out of the box.

The Cubs’ Seiya Suzuki became the clear front-runner as the league’s Rookie of the Month for April, but he failed to keep up the hot start and is now injured, generally falling to about 15/1 for the award.

Cruz’s performance in the minors gradually improved, and combined with concerns about his service time and years of team control no longer an issue by mid-June, Pittsburgh had no choice but to call him up a week ago. Starting shortstop Kevin Newman has had a lengthy IL stint, and others filling in for him have been substandard.

In his first game back in the majors (he had an eye-popping two-game stint at the end of 2021), Cruz had 4 RBIs. In that game against the Chicago Cubs, he hit a ball harder (112.9 mph) than any Pirate had all year. From shortstop, where at 6-foot-7 he is taller than any regular at the position in MLB history, he fired a ball across the diamond for an out at 96.7 mph — faster than any infielder in baseball had thrown this year.

For a team that is now 29-43 and has no present — only a future — Cruz is the exciting, symbolic leader of a group of young players, fellow ROY contender Suwinski included, who are giving fans a reason to consider a trip to PNC Park again.

So now BetRivers, which like other Kambi-supplied betting sites had Cruz at 40/1 several weeks ago, has him tied with the Padres’ Gore at +450 at the top of its odds board for NL ROY. DraftKings joins BetMGM, meanwhile, by putting Cruz alone at the top: DraftKings has him +400 to Gore’s +450, and BetMGM has Cruz +375 to +450 for both Gore and the Braves’ Harris.

There’s some strong competition at this stage

Some years may see a dearth of worthy rookies to consider for the award, and while it’s still early with less than half of the season having been played, this is not shaping up to be one of them.

Gore has won four games in 11 starts for a top contender, and if not for back-to-back games this month in which he gave up a total of 14 runs against the Colorado Rockies, his ERA would stand below 2.00 instead of its still-impressive 3.34.

Harris, a defensive whiz, is batting .330 with an .879 OPS to help lead a winning surge over the past month by the Braves.

Gorman, batting .246 with 6 homers for the Cardinals, has been solid across the board for a contending club.

It has not been common for pitchers to win Rookie of the Year, as six of the last seven winners in the NL have been position players, with the Milwaukee Brewers’ Devin Williams the exception in 2020. He was a reliever, and as the regular season winds down, teams tend to be extra careful limiting the number of games and innings pitched by valuable but tender young starters.

The interesting thing about Cruz is he’s only had one week of play in the majors in 2022 for the oddsmakers and bettors to go by, so his seasonal statistics are nowhere near those of any other contenders. But just as with his Pittsburgh teammates and their fans, he has passed their eye test in phenomenal fashion.

Some even label his abilities “freakish.” That term would also now apply to the opportunity to claim him at 40/1 odds to be named the league’s top rookie.