Penn State Favored To Rebound Against Minnesota After Big Stumble

Pitt and Temple are both underdogs in Saturday's NCAA action 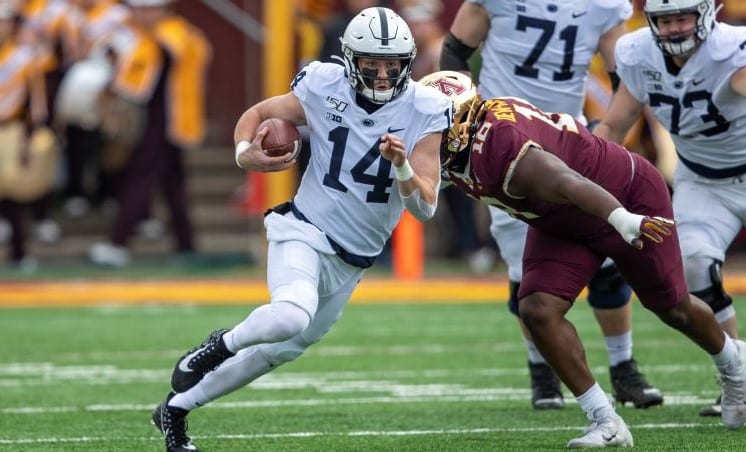 Penn State goes in a seven-day span from 100,000 Michigan fans rooting against it in a drubbing to 100,000 of its own white-clad partisans cheering for it to live up to oddsmakers’ expectations and beat Minnesota Saturday night.

That’s a big game for the No. 16 Nittany Lions in winning back national respectability, while the state’s online sportsbooks show Pitt as a small road underdog visiting Louisville the same night. Temple gets a head start on Pennsylvania’s NCAA action by hosting Tulsa Friday night, but the Owls are about a two-touchdown underdog.

Below we cover the best odds options in betting on the weekend slate of action involving the state’s teams.

Penn State favored by 4 over Minnesota

Penn State (5-1, 2-1 Big Ten) took a rather big step back from national and Big Ten contention with Saturday’s 41-17 loss to Michigan. Though the game was close at halftime, the Wolverines’ offense was dominant throughout — particularly in running for 418 yards — and the Nittany Lions’ own offense never got untracked.

In front of a “White Out” crowd at 7:30 p.m. Saturday, they face a Minnesota team with its own recent problems. The Golden Gophers won their first four games but lost 26-14 last week to No. 18 Illinois after getting beaten by Purdue in their prior game.

Pennsylvania’s sportsbooks almost universally listed Penn State Thursday morning as a 4-point favorite, but a bettor using FOX Bet only had to lay 3.5.

The best moneyline return on the Nittany Lions was the -180 from sites using Kambi odds such as BetRivers and betPARX. The over/under was most commonly 44.5, with FOX Bet and PointsBet both higher at 45.

Quarterback Sean Clifford did not have a good game against Michigan, which was pretty much true of every Penn State player, but he did have a 62-yard scamper. He eventually had to come out of the game with a bruised shoulder to be replaced by freshman Drew Allar, but Clifford is expected to be back behind center against Minnesota.

Golden Gophers quarterback Tanner Morgan suffered a head injury against Illinois, meanwhile, and his status for playing at Beaver Stadium was still uncertain as of mid-week.

Minnesota only had 38 yards passing against Illinois, and with or without Morgan it could rely on the running game to test Penn State’s defense. It has a powerful running back in Mo Ibrahim, who has rushed for 694 yards and nine touchdowns on the season. Minnesota is 16th nationally in rushing offense at 227.3 yards per game.

Pitt gets 2.5 points against Louisville

Pitt (4-2, 1-1 ACC) righted itself after a startling upset by Georgia Tech to defeat Virginia Tech 45-29 on Oct. 8, with the story of the game being running back Israel Abanikanda. He ran for 320 yards and six touchdowns.

Louisville (3-3, 1-3) was beating Virginia 34-17 the same day, getting its first ACC win after losses to Syracuse, Florida State, and Boston College.

Though Pitt has the better record, most sportsbooks listed it as a 2.5-point underdog playing at Cardinal Stadium at 8 p.m.

BetRivers and other Kambi sites were an exception, giving Pitt 3 points. They also had the best moneyline return on Pitt at +118 and the over/under at 55, while others including FanDuel and DraftKings used 55.5 for the points total.

Pitt can be expected to go again with a heavy dose of Abanikanda, who leads the NCAA in all-purpose yards at 186.2 per game.

His 6.4 yards per carry, though, is matched by Cardinals quarterback Malik Cunningham, who is expected to return after missing the win over Virginia due to concussion. Cunningham had started 40 games for Louisville before that and poses a big threat with his legs, having run for more than 100 yards in three games this year and scoring three TDs against both Boston College and South Florida.

Temple a big underdog at home

Temple hosts Tulsa at 7:30 p.m. Friday in a game between American Athletic Conference opponents with the same records (2-4, 0-2), but the Golden Hurricane are perceived as the stronger outfit.

The sportsbooks mostly had the Owls as a 13-point underdog Thursday, with FanDuel and FOX Bet even going up to 13.5. A moneyline return of +400 could be obtained from DraftKings, Caesars, FOX Bet, and Betway. The over/under was universally 52.5.

It’s been almost a month since either team has won a game, but Tulsa has had the tougher schedule. Its most recent loss came against Navy, 51-21 on Oct. 8, following defeats versus Cincinnati and Mississippi.

Tulsa has an experienced senior at quarterback in Davis Brin, who led the Golden Hurricane to a 44-10 stomping of the Owls in Oklahoma last year. Brin has thrown for 1,839 yards and 14 TDs this year, aided by one of the nation’s top receivers in Keylon Stokes, who has 44 catches for 765 yards.

Temple’s counter at quarterback is E.J. Warner, who has shown potential but is nonetheless a freshman. The Owls have done little on the ground this year, averaging just 2.6 yards per carry, but this could be the game to change that, as Tulsa has been allowing 239 rushing yards per game, fourth worst in the NCAA.