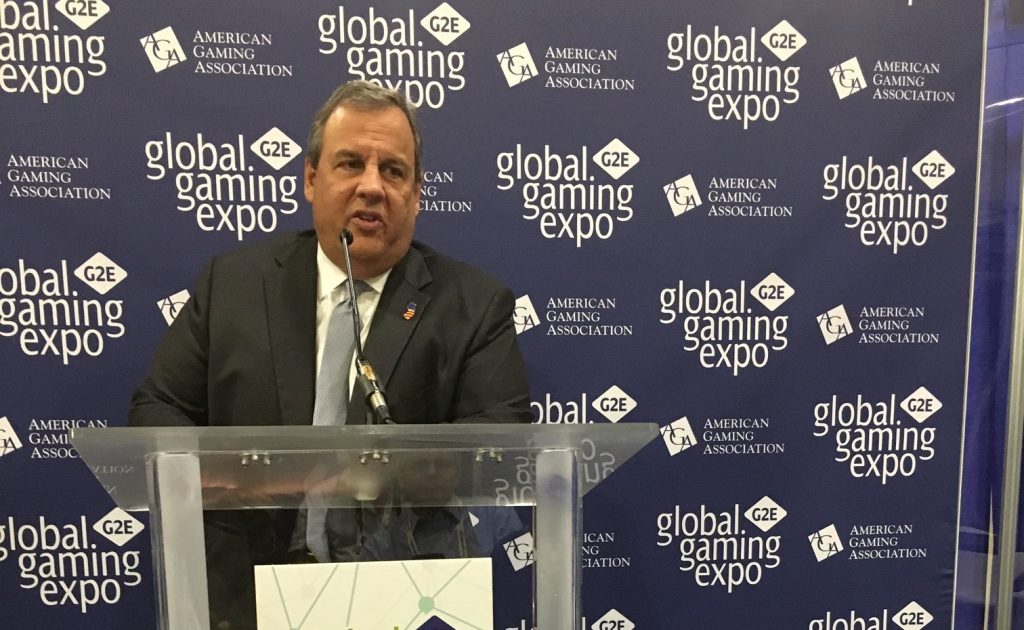 Facebook
Twitter
LinkedIn
Email
Former New Jersey Gov. Chris Christie for the most part Tuesday offered the standing room-only Global Gaming Expo event audience in Las Vegas more of a mix of his political and legal expertise, as well as charm, than his more combative side.
But after reaping praise on his home state for how it has handled its rollout of sports betting — shortly before state regulators announced a new record of $446 mm in wagers in the month of September — Christie turned his weapons on a neighboring state.
“Let’s take a state that has really screwed it up — Pennsylvania,” Christie said during his one-hour keynote speech. “And I mean, a rolling dumpster fire is sports gaming in Pennsylvania. They did all the wrong things — a ridiculously high tax rate, a ridiculously high barrier of entry,” Christie added, while claiming that “every Saturday and Sunday this fall, people are driving from Pennsylvania into New Jersey and sitting at our rest stops on their mobile phones and making bets, then heading back home.”
Christie was citing the greater availability and ease of use for some betting in the Garden State, though Pennsylvania has been making progress on both fronts.
The high tax rates for various forms of gambling in Pennsylvania has been a bone of contention among industry insiders, starting with roughly 50% tax rates on casinos that dates back to 2006. But in each case, the size of the state’s population has tended to lead gaming companies to grit their teeth and operate anyhow — leading to a windfall of tax revenues.
Christie, however, takes the common position that relatively high tax rates in a low profit margin industry like sports betting may hurt the state down the road as there will be less incentive to maintain or upgrade existing facilities.
“It’s the opposite of ‘Field of Dreams’,” Christie said of high tax rates. “If you do that, they won’t come.”
Asked later if he thinks Pennsylvania will pivot toward more favorable terms for gaming operators, Christie replied, “I’m not seeing it. There was no reason they shouldn’t have been way out in front on this. But Pennsylvania will come around eventually.”

While Keystone State lawmakers took a bruising, Christie described New Jersey’s sports betting experience as “the test case for all the other states about how to do it, and do it well” — a mainstream sentiment in the industry.
“We’ve shown the rest of the country exactly how to do this,” Christie said, while also offering a “nutshell” version of the 2012-18 legal battle by the NFL and four other sports organizations to try to stop New Jersey from offering sports betting at its racetracks and Atlantic City casinos.
Christie said he thought it was “ridiculous” that only Nevada could offer extensive sports betting, so he went to his Attorney General and “some folks in the state Legislature” to remedy that.
Former state Senator Ray Lesniak (described by Christie in another context Tuesday as “difficult”) remembers it differently, however, since his law firm sued to try to end the ban a decade ago — before Christie was elected.
The most dramatic version of this re-telling had Christie again needling the sports organizations — each worth billions — somehow not retaining Ted Olson, perhaps the most prominent lawyer in the U.S.

“I called Ted and said, ‘Are you available, or do you have a conflict?’

“I have no conflict,” Christie recalls Olson as saying, describing how “those were the four words that led to sports betting across America.”

Olson’s arguments before the U.S. Supreme Court in Dec. 2017 won the day — and five months later, the Court vacated the Professional and Amateur Sports Protection Act of 1992. The one aspect of New Jersey’s sports betting model that gathers the most criticism is the ban on wagering on college games played by New Jersey universities (or on any college sporting events taking place in the state).

The ban has variously been credited in homage to former U.S. Senator and Princeton/Knicks basketball star Bill Bradley — the PASPA sponsor 27 years ago — or to former Gov. Richard Codey, a stalwart Seton Hall supporter. Others say there were enough Rutgers alumni in the Legislature that there was no point in seeing a risk of a challenge to PASPA delayed by a potentially modest revenue stream at best.

“For New Jersey people, they are not knocking down the doors to bet on Rutgers or Seton Hall, and those are essentially our only two major university sports programs — God love Princeton, but I don’t think people are dying to bet on Ivy League football or basketball,” Christie said. “If the ban was repealed, I wouldn’t stomp my feet up and down, either. “

This month’s news of the latest Atlantic City mayor resigning in disgrace prompted Christie to tout his administration’s controversial takeover of the city.

“The mayor gets elected, but most of the major decisions are still being made by state government,” Christie said, asserting that some new development in the city only has taken place because of the takeover.

“My successor [Democrat Phil Murphy] campaigned saying he would not continue that,” Christie said. “But two years later, he’s doing the exact same thing because it’s the right thing to do. Someday he’ll admit he’s wrong — he essentially called me a racist for taking over Atlantic City. I’m sure the apology from Governor Murphy is coming any time now. I wait by my phone every day for it.”

The “walk-up” and “walk-off” music for Christie Tuesday was “Dancing in the Dark,” one of the many hits of fellow Jersey guy (though politically opposite) Bruce Springsteen.

Asked if “Roll of the Dice” or “Atlantic City” might have been more appropriate Springsteen tune choices, the former Governor replied, “Nothing could be worse than ‘Dancing in the Dark’ — no one wants to see me dance, that’s for damn sure.”

With just a few minutes of his one-hour slot remaining, Christie humorously made a note of an event coordinator’s wave of an arm under the chin, “You know, in New Jersey, that’s a threat. Maybe in other parts, it means, ‘Wrap it up.’ In New Jersey it means, ‘I am going to kill you.’ So please, if you have other New Jersey speakers, be sensitive to those type of things. If you do that [signal] again, they are going to run out the back of the stage and leave.”

“I’m really disappointed — and if I were Governor, it never would have happened, I guarantee it,” Christie said, jokingly adding, “We could have brought in our National Guard. Delaware is smaller than us, so we could have taken them for sure.”

On another technical front, the “Christie I” and “Christie II” cases that lingered for years in the federal courts wound up as “Murphy v NCAA” since the new governor was sworn in before the Supreme Court’s final ruling.

Christie shrugged and said, “It’s not like people have forgotten who brought the fight. What matters to me is who gets the result — and it’s not like I’m lacking in name recognition.”

John Brennan has covered NJ and NY sports business and gaming since 2002 and was a Pulitzer Prize Finalist in 2008, while reporting for The Bergen County Record.

John Brennan has covered NJ and NY sports business and gaming since 2002 and was a Pulitzer Prize Finalist in 2008, while reporting for The Bergen County Record.