Are The Phillies Buyers Or Sellers? Are You? 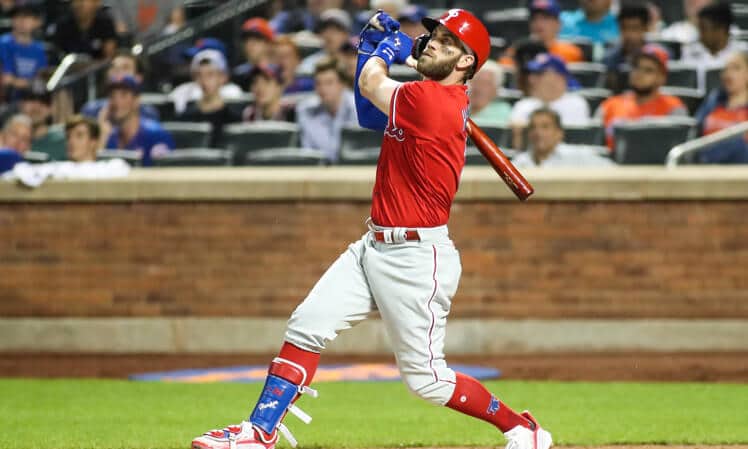 After the glory days of 2007-11 (five straight playoff appearances and one World Series title) and the bottoming out of 2013-17 (five straight years between 63 and 73 wins), the Fightin’ Phils have settled a little too comfortably into their new era as the Five-Hundred Phils.

Under manager Gabe Kapler in 2018, the Phillies went 80-82. They signed Bryce Harper to a $330 million contract and improved all the way to 81-81 in 2019. Bye-bye Kapler, hello Joe Girardi. The team sputtered to a disappointing 28-32 in the COVID-shortened 2020 season, and this year, it was 41-42 through Tuesday, just one win away from achieving dictionary-definition mediocrity a few games shy of the All-Star break.

The Phils are presently on pace for 80 wins. If they win Wednesday night to make it three in a row against the Chicago Cubs, they’ll be on pace for 81. It seems the oddsmakers, who set the Phillies’ season-long over/under line at 80.5 before the season, had this squad pegged.

The thing is, if you’re an optimistic Phillies fan — does such a thing exist? — it’s actually not hard to feel good right now about this team. The Phils have won four of their last five, finally have all of their best offensive players healthy (Harper has missed 20 games, Jean Segura 27, and Didi Gregorius 47, but they’re all producing now), and have survived historically atrocious relief pitching without falling out of the playoff picture.

If they keep it up for the next three weeks or so, the Phils — currently in second place in the NL East, four games back of the Mets — will be buyers at the July 31 trade deadline, looking to bolster that bullpen and make a postseason push. If the wheels come off, then by the end of the July the Sillies will be looking to sell off veteran parts.

We’ll soon know if the Phillies are buyers or sellers. For those in Pennsylvania who like to dabble in sports betting, the challenge is to handicap that uncertain situation and decide if you are backing or fading Phils futures wagers.

Let’s start small. With the Phils currently 7½ games out of the second wild card spot, their most realistic path to the playoffs is winning the division.

At the start of the season, their highest odds to do so were +875. At most regulated PA mobile sportsbooks, that number has held fairly steady, with the Phillies now +800 to take the NL East at all of the Kambi-affiliated books in the state (DraftKings, Barstool, BetRivers, and more) and +900 at FanDuel Sportsbook and BetMGM. But there is one outlier, as FOX Bet offers a tempting +1100 for the Phils to catch the Mets and hold off the Braves and Nats, both of whom sit within a game of Girardi’s boys.

Interestingly, the books and/or bettors still appear to believe more in Atlanta and Washington, which go as high as +600 and +700, respectively, to claim the division title.

Widening the scope, let’s say the Phillies do make the playoffs. Can they go on a postseason run, even with a juggernaut like the defending champion Dodgers standing in their way?

To reach the World Series, the Phils are currently 10th in the National League pecking order at most sportsbooks, priced at 30/1 at every book except Caesars, where they’re 28/1. At the outset of the season, they were 20/1. Given that their odds to win the NL East haven’t changed much and they’re right on pace for their preseason win total prop, perhaps there’s a smidge of value on that NL pennant future — if you’re confident they’ll be buyers at the end of July and that they are indeed an elite offensive team when everyone is healthy.

It’s probably ridiculous to give anything more than a passing glance to the Phillies’ World Series-winning odds, but after entering the season at 40/1, they’re now either 60/1 or 66/1, depending on the sportsbook. That positions them an appropriately mediocre 19th out of 30 MLB teams.

A ‘Wheel’ chance at the Cy Young?

It’s all but impossible that any individual player from this Phillies team will win a major end-of-season award — with one exception.

Forget any Phillie winning NL MVP. In that race, Mets ace Jacob deGrom is currently the favorite, followed closely by Fernando Tatis Jr. of the San Diego Padres. Harper — who failed to make the All-Star roster — sits at 50/1 at all books except FanDuel, where he’s 70/1. Rhys Hoskins and JT Realmuto are both as high as 150/1, and … well, do you really need to know Alex Bohm or Aaron Nola’s MVP odds? Just knowing both of them have MVP odds should be enough to make you furrow your brow.

The Cy Young betting, however, is where there’s a Phillie priced as if he has a realistic shot at winning.

Zach Wheeler, who leads the majors in strikeouts with 139 and is third in the NL in ERA at 2.05, is +2000 to win the Cy Young at Pennsylvania’s Kambi books. Only deGrom, Brandon Woodruff, and, at some books, Kevin Gausman have shorter odds.

The problem is that deGrom fella.

As great as Wheeler has been on the mound for the Phillies this season, nobody but the Mets star, he of the sub.-1.00 ERA, has a chance at this award unless an injury derails him.

So, ask yourself: Is 20/1 a good price for the parlay of Wheeler continuing to pitch lights out and deGrom missing at least a month?

By the way, there are Nola odds for the Cy Young as well, but if you’ve watched the anticipated ace of the Phillies staff stumble to a 4.53 ERA through his first 18 starts, surely you can find a better way to invest your money.