Eagles Catch A COVID Break, And It’s Must-Win Time For The Steelers

Philly is a big favorite over Washington, and Pittsburgh's a small underdog vs. Titans 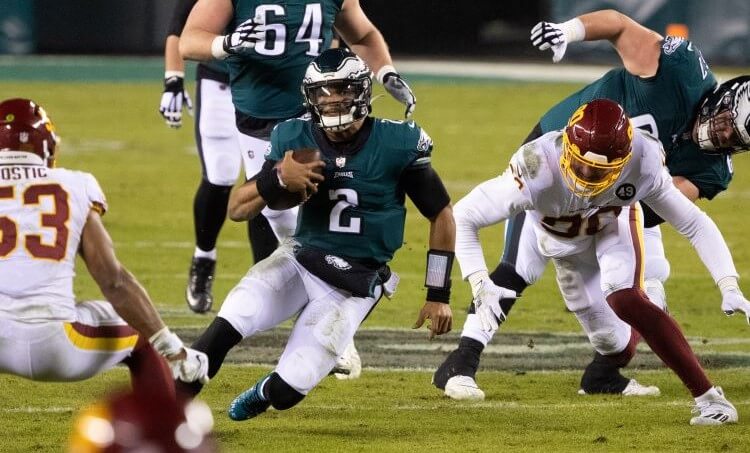 Update: The NFL announced late Friday afternoon that the Eagles-Washington game scheduled for Sunday would be rescheduled to 7 p.m. Tuesday due to the Washington Football Team’s COVID outbreak.

The Eagles and Steelers are now unofficially in an every-game-is-vital stretch of the season, and Philadelphia has caught a very lucky break while Pittsburgh faces the first of four stiff challenges in a row.

The Eagles have became heavily favored over the COVID-decimated Washington Football Team in hosting them with a chance to pass Washington in the playoff standings as a potential wild card team. Meanwhile, the Steelers are a very small home underdog against the AFC South-leading Tennessee Titans in a game that precedes others against the division-leading Kansas City Chiefs, the Cleveland Browns, and division-leading Baltimore Ravens.

Pennsylvania’s online sportsbooks can be expected to add various promos and odds boosts tied to the games by Sunday morning, on top of the odds and betting options already available.

Philadelphia and Washington are both 6-7 and largely out of the running for the NFC East behind the 9-4 Cowboys, but they’re both very much in the hunt for one of the three NFC wild card slots.

The difference is the Eagles are coming in relatively healthy off of their bye week, while Washington has had at least 21 players show up on the COVID protocol list this week. That’s aside from injuries the visitors had already sustained, such as the loss for the season of star defensive lineman Chase Young and starting quarterback Ryan Fitzpatrick.

As of Thursday, the sportsbooks had already all moved the Eagles to a heavy favorite for Sunday afternoon’s contest, and that was before an ESPN report Friday morning that Washington starting quarterback Taylor Heinicke had been added to the COVID list. At 11 a.m. Friday, the point spread was well into double digits for sites listing odds, while some had taken the game off the board temporarily.

DraftKings, BetMGM, and Kambi-supplied sites like BetRivers, Unibet, and TwinSpires had all moved the Eagles to a 12-point favorite, while FanDuel listed 12.5. The Kambi sites had the best moneyline return available at -590.

The points total, meanwhile, dropped from 44 on Thursday to between 39.5 (FanDuel) and 40.5 (BetMGM and Kambi sites) by Friday morning.

In their last game before the bye, the Eagles won on the road against the hapless New York Jets, 33-18. It repeated a theme this season, in which the team is now an impressive 5-3 on the road, while just 1-4 at home.

It stands to reason that the year’s second win at Lincoln Financial Field should come Sunday, in that Washington’s defensive line has been even more battered by COVID and injuries than the rest of its team. That ought to be tantalizing for an Eagles offense that now leads the NFL in rushing, at 160 yards per game.

Jalen Hurts is expected to return from injury to play for the Eagles after missing the Jets game, when Gardner Minshew filled in capably. If Heinicke can’t start behind center, Washington is left with probably using one of two players who was on a practice squad a week ago — either their own Kyle Shurmur, or Garrett Gilbert, who was just acquired from the New England Patriots.

The Steelers, at 6-6-1, are now 11th in seeding for the seven playoff spots in the AFC after a 36-28 loss to the Minnesota Vikings in a Thursday night game on Dec. 9. They might well need to win four straight games against teams with winning records to make the postseason, and at the very least, they must win three out of four.

That starts with Sunday’s opponent, the Titans (9-4), with the one break for Pittsburgh being Tennessee’s loss for the remainder of the regular season of star running back Derrick Henry. On the other hand, Henry’s replacements have filled in quite capably, with the team averaging 158.3 rushing yards it last three games, while opponents have been running roughshod over the Steelers, who rank 28th in rush defense.

Still, the sportsbooks size up the game roughly evenly. It was most common to see the Steelers as a 1-point underdog Friday morning (FanDuel, DraftKings, BetMGM, Caesars) but the Kambi sites and FOX Bet listed the spread at just a half-point.

The moneyline was even money for a Steelers wager at Caesars. The over/under was mostly 43, but FanDuel had it just 42.5 (with increased vig of -115 to bet the over).

What could be crucial to the Steelers is the health of star linebacker T.J. Watt, who had to leave the Vikings game in the middle with a groin injury. He is expected to be able to start Sunday, and the Steelers are 6-2 when he plays a full game, 0-4-1 when he misses all or part of a contest with injury.

Watt’s Defensive Player of the Year odds have been diminished by last week’s injury and lack of sacks to add to his league-leading total of 16. He was the favorite a week ago, and DraftKings still has him tied for the shortest odds with the Browns’ Myles Garrett at +300. Other sites have him passed up by either Garrett or the Cowboys’ Micah Parsons, however, which works to the benefit of believers in Watt who can get him now at +400 at FanDuel.