Fightins favored in three-way race with Mets and Braves, and Harper is suddenly a live ‘dog for MVP 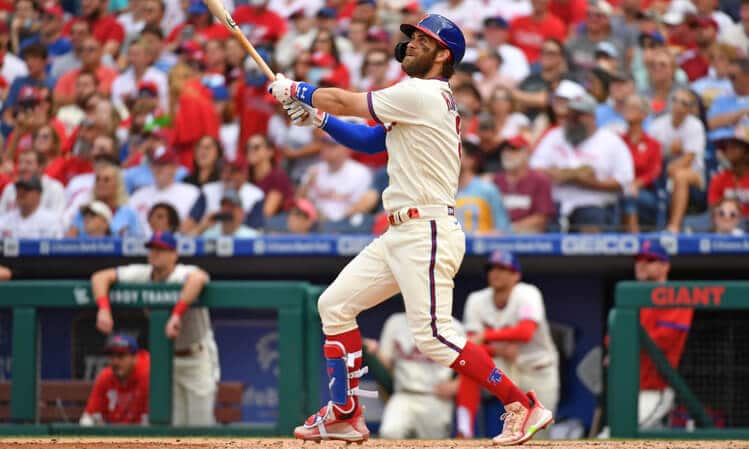 Checking the standings has become an absolute joy for Phillies fans over the past week — particularly throughout the weekend.

Having spent almost the entire 2021 Major League Baseball season hovering about three to five games behind the NL East-leading New York Mets, the Phils have caught fire in August, winning eight straight, including a weekend sweep of the Mets at Citizens Bank Ballpark. As a result, the Fightins have surged into first place, two games up on the also-hot Atlanta Braves and 2-½ ahead of the slumping Mets, losers of 12 of their last 17.

For a Phillies fan, nothing beats seeing the home team listed first in the division on that standings page, and that beautiful “W8” in the “STRK” column.

But the race is far from over. The Phils have exactly 50 games to go, starting with a tough three-game set at home this week against the L.A. Dodgers after a much-needed day off on Monday. That series kicks off Tuesday with a marquee pitching matchup between Aaron Nola — the anticipated Phillies ace who has instead been an inconsistent no. 2 this season behind Cy Young contender Zach Wheeler — and Max Scherzer, an NL East rival until the day before the trade deadline. The early line on that game at DraftKings Sportsbook has the visiting Dodgers a -170 moneyline favorite, with a +150 payout if the Phils prevail.

While we wait to find out if the Phillies can get to nine wins in a row, this brief pause in the schedule offers an opportunity to explore futures odds for the team — and its superstar outfielder making an out-of-nowhere case for MVP.

Phils first, Mets and Braves next in some order

The Phillies have had their fair share of injury issues: Starting centerfielder Andrew McCutchen is on the IL and various other contributors have gotten the “day-to-day” designation recently. But for the most part, they’ve gotten healthy since the All-Star Break, while their chief NL East rivals have each taken major hits.

For the Braves, an ACL tear ended the season of Ronald Acuna Jr., who was cranking away on an MVP-contender pace with 24 homers and a .990 OPS through 82 games. Meanwhile, the Mets’ swan dive has coincided with elbow issues for pitcher Jacob deGrom, who seemed both a Cy Young shoo-in and narrowly the top MVP contender before starting a series of IL stints in July.

The biggest surprise at the moment might be neither the Phillies’ success nor the Mets’ downturn, but rather the Braves staying in the hunt without Acuna. (They haven’t lost two games in a row since the All-Star Break.)

Here’s a look at the NL East odds as of mid-day Monday at five leading Pennsylvania mobile sportsbooks:

Takeaways: The Phillies have separated themselves as the favorites, though they’re only minus-money faves at BetRivers; the books are divided on whether the Braves or Mets are the bigger threat to the Phils; and FanDuel Sportsbook is currently the most bettor-friendly book, whichever of the three teams you wish to back.

And here’s a glimpse at the odds from a sportsbook that isn’t available in PA yet, but will be soon (with the delightful Bryce Harper homer video embedded):

Speaking of the Phillies’ $330 million man …

In a normal season, a player who has missed 21 of his team’s first 112 games and has just 45 RBIs would not be a serious MVP candidate. But superstar injuries have made this not a normal season. If deGrom was healthy, he might be the MVP favorite. If Acuna was healthy, he might be the MVP favorite. Fernando Tatis Jr. is the MVP favorite, with a stat line of a .292 average, an NL-best 31 homers, 70 RBIs, and an NL-best 23 stolen bases. The Padres shortstop is between -118 and even money at the various PA sportsbooks.

But Tatis partially dislocated his left shoulder on July 30, and it is unclear when he will return. If he does in the next couple of weeks, and plays even mediocre baseball by his standards, he will almost certainly win MVP. However, if Tatis can’t play at least another 40 or so games, the door is open wide and Harper currently has the next-shortest odds at every book.

Yes, Harper’s RBI numbers are astonishingly low — his first 14 homers of the season were all solo shots, incredibly — and he’s missed plenty of action with a variety of minor injuries, but he’s been a key spark in his team’s surge to first place, he leads the majors in OPS since the All-Star Break at 1.256, he’s batting .370 since the break, he’s third in OPS (behind Tatis and Acuna) and second in OBP (behind Juan Soto) in the NL for the season.

Basically, Harper is three “ifs” away from winning his second MVP award: If Tatis doesn’t get healthy soon, if Harper stays hot, and if the Phillies win the NL East. Individually, each of those are realistic. Collectively, well, it’s a semi-longshot parlay.

The highest payout currently on a Harper MVP bet is +450 at the sites with lines originating via Kambi (BetRivers, PlaySugarHouse, Unibet, Barstool, Parx, and TwinSpires). Other contenders not far behind include the Dodgers’ Max Muncy and Trea Turner (who was traded from the Nationals along with Scherzer on July 30) and the Braves’ Freddie Freeman. If the Dodgers can catch the San Francisco Giants, Muncy or Turner have a shot, and same for Freeman if Atlanta takes the East. But for the moment, Harper is the only MVP contender playing for a first-place team.

With his stellar complete-game two-hit shutout Sunday against the Mets — right after the team held a ceremony retiring Roy Halladay’s No. 34 jersey — Wheeler moved into the pole position in a wide-open NL Cy Young race. It was Wheeler’s third complete game of the year, an almost unthinkable stat in 2021.

He’s priced between +200 and +225 after scoring his 10th win and lowering his ERA to 2.42 while taking over the MLB lead in strikeouts with 181. Wheeler is second only to the Angels’ Shohei Ohtani — the likely AL MVP — in the Wins Above Replacement stat.

The Dodgers’ Walker Buehler is Wheeler’s chief competition, with an NL-best (now that deGrom doesn’t have enough innings to qualify) 2.13 ERA. Buehler fetches as high as a +370 return at FanDuel. From there, it drops off to Milwaukee’s Brandon Woodruff (+525 at DraftKings) and Corbin Burnes (+750 at FanDuel) and the Giants’ Kevin Gausman (+950 at FanDuel). Everyone else is at least 10/1.

Could the Phillies win the NL East and boast both the MVP and Cy Young winners? The first accomplishment matters most to fans of the team, but sports bettors can find ways to make all three pursuits highly meaningful.