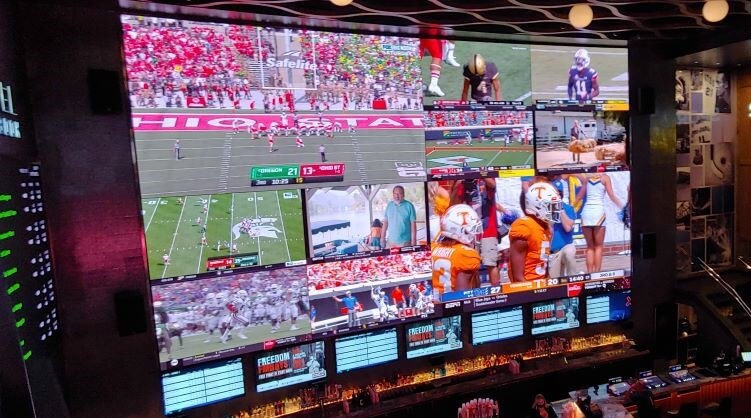 Pennsylvania sportsbooks’ uptick in betting volume in August for the first time since March Madness should have them buoyant about the upcoming possibilities from a full, normal season of NCAA and NFL football.

The Pennsylvania Gaming Control Board reported Monday that the 13 online and 16 retail sportsbooks combined for $348.5 million in monthly betting handle, up 14.5% from July. That was with just a smattering of NFL preseason games to bet on in the sport that typically attracts more interest than any other among sports bettors.

A month from now, the figures will reveal how much activity the operators saw during a full month of September games compared to September 2020, when the sportsbooks took $462.8 million in bets. More than 90% of the wagering takes place online, and there were just 10 online sites in operation at this time a year ago compared to the 13 now.

Last year, the statewide sportsbook handle jumped nearly 27% between August and September, from $365 million to $462.8 million, but 2020 was a year when COVID-19 disruptions created a very unusual sports calendar. The NBA and NHL were in full swing late last summer, which meant more sports betting took place in August 2020 than August 2021, even though more sites were in operation last month. September football, meanwhile, was less than normal on the collegiate level last year due to COVID-caused cancellations and delays.

Another 27% increase in handle in September would result in some $441 million in betting volume, but the increase could be much higher this year. Whether it would be enough to break the statewide record of $615.3 million set this past January, however, is in doubt.

While football is the most popular betting sport, that betting record set in January shows it takes more than gridiron action to stir the most betting activity. As another example, the second biggest month ever in Pennsylvania contained no NFL or NCAA football at all.

Here are the five biggest betting months in the state since legalized wagering began almost three years ago in the wake of 2017 legislation and a May 2018 U.S. Supreme Court decision that made it possible outside of Nevada:

January’s $615.3 million came on the combined strength of postseason football activity in both the pros and college, along with the betting popularity of NBA and NCAA basketball. The latter’s attraction was made clear in how March contained the second-highest level of betting despite football’s dormancy.

For near-record months when football was clearly carrying the load, one has to look at last October and December, which had a curious little drop in November (to $491.9 million) between the two of them.

Based on those figures, it seems a conservative guess that $500 million in monthly handle is a floor for the football months this autumn, with the question being how much higher it can go.

Last September-November, there were only 10 online sportsbooks in operation. BetMGM arrived in December as a significant operator to boost statewide totals. It now attracts the third-highest handle each month, behind FanDuel and DraftKings and just ahead of Barstool Sportsbook, which itself only launched last September.

Pennsylvania’s sports betting volume, somewhat curiously, is lower than in both neighboring, smaller New Jersey and the newer legalized state of Illinois, which has fewer online operators.

New Jersey, which many months ago supplanted Nevada as the biggest sports betting state, had a total August handle of $664.7 million, 91% higher than Pennsylvania’s. Some of that is due to New York bettors who cross the state line to bet on phones in New Jersey, as the start of legal mobile wagering in New York is still months away.

Illinois in February pushed Pennsylvania out of the third spot nationally despite its slightly smaller population. Its July handle of $369.1 million (its August total has not been reported yet) was 21.3% higher than Pennsylvania’s.

Still, the activity is popular enough among some 9 million adults 21 and older in Pennsylvania that they wagered nearly $5.6 billion legally on sports in the 2020-21 fiscal year. The sportsbooks retained 7.9% as the “hold” from losing bets, and after deducting $131.8 million in promotional credits, they had $308.8 million in taxable revenue. State and local governments claimed $111.2 million of that from the 36% tax rate, which is far higher than the rate in most legal betting states.

Some states in their monthly revenue reports break out how much is bet on each individual sport, but Pennsylvania does not. In states that do, it shows how parlay betting — which is most popular during football season — dramatically boosts sportsbooks’ revenue.

The UNLV Center for Gaming Research publishes data, for instance, detailing how sportsbooks in Nevada have historically retained 31% from losing parlay bettors on all sports, compared to 5.2% from those placing single football bets.

If Pennsylvania’s sports betting operators are shown to achieve new heights starting with the September revenue report, it will be with the help of those longshot-oriented parlay bettors, even if the state doesn’t explicitly show it.