Nittany Lions giving 10 points to Maryland, while Pitt's favored on the road at Virginia 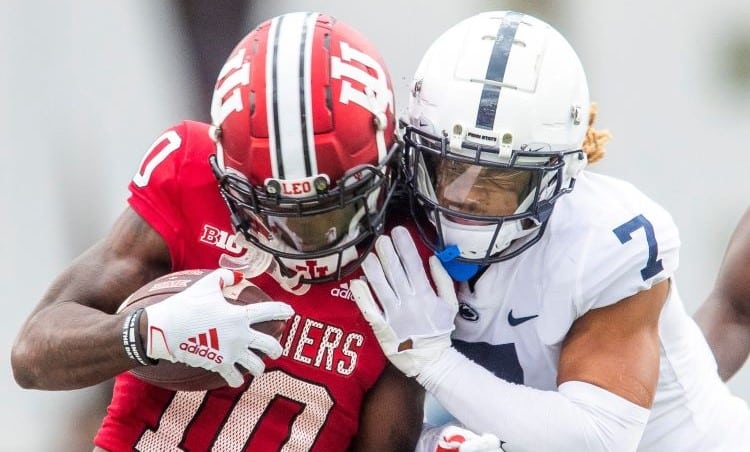 It’s not often the three Pennsylvania FBS teams all beat the point spread, but that trifecta hit last week for Penn State, Pitt, and Temple in victories that delighted fans and sports bettors alike.

Penn State and Temple both face tougher opponents this Saturday afternoon in Maryland and Houston, respectively, though the Nittany Lions are a double-digit favorite again at online sportsbooks. The Owls are being spotted nearly three touchdowns, meanwhile, in point spreads.

Pitt visits Virginia for a noon kickoff as a modest road favorite in seeking a second straight victory to ensure itself bowl eligibility.

Penn State can go 10-2 but what is PSU's best win this season? What's the value of a signature win?

Franklin: "What you want is you want both, right? … That's what the best programs in college football are attempting to do. … I think it's a fair point."

Maryland (6-3, 3-3) lost to Wisconsin 23-10 in crummy weather conditions, meanwhile, and would love to set its season right with a win at Beaver Stadium just like it got last time there in 2020.

Oddsmakers don’t see that outcome as likely, making Penn State a favorite by as many as 10.5 points as of Wednesday. A bettor backing the Nittany Lions would only have to give 10, however, if using DraftKings, PointsBet, FOX Bet, Caesars, and Betway.

The best moneyline return on the Nittany Lions was the -375 offered by BetMGM. The over/under was either 59 or 59.5, with an over bettor Wednesday able to use PointsBet to get the 59 with reduced vig of -105.

The Lions’ two-headed ground game was impressive again against Indiana, with Kaytron Allen and Nick Singleton combining for 159 yards on 34 carries and Allen scoring three times. The pair of freshmen presumably are happy to know that Maryland gave up 278 rushing yards at Wisconsin.

Even more impressive Saturday was Penn State’s stellar secondary and overall defense, which held the Hoosiers to 131 passing yards while picking off three throws. The defense will be facing a better quarterback this week in three-year Terps starter Taulia Tagovailoa (younger brother of the Miami Dolphins’ Tua), who is among the top five passers in the Big Ten in numerous categories.

Tagovailoa was ineffective at Wisconsin, however, with the weather at least partly to blame, and the health of his best receiver, Rakim Jarrett, is in question after suffering a leg injury Saturday. Tagovailoa himself has had to battle back from a knee injury this season.

Pitt boosted by getting Abanikanda back

Pitt (5-4, 2-3) has won five of its last six meetings against Virginia, and it is favored to do so again after a solid 19-9 win Saturday over a ranked Syracuse squad that was playing without its starting quarterback.

While some sites had Pitt favored by as many as 4.5 points on Wednesday, a bettor at FanDuel or FOX Bet had to give only 3.5 points. FanDuel also offered the best moneyline return on Pitt, at -184. The over/under was mostly set at a modest 40, with FanDuel and Kambi-odds sites that include betPARX, BetRivers, Barstool Sportsbook, and Unibet all using 40.5.

Star running back Israel Abanikanda sat out the Syracuse game with injury but is expected back against Virginia. Even without him, the Panthers’ rushing game dominated play Saturday, with Rodney Hammond running for 124 yards while Pitt possessed the ball for nearly 37 minutes. A stifling Pitt defense, meanwhile, had six sacks.

Virginia’s record is explained partly by the disappointing season of once-heralded quarterback Brennan Armstrong, whose completion percentage of 54.9% is down from 65.2% last year and who has thrown for just 6 TDs after 31 last season.

The Temple team (3-6, 1-4) at Lincoln Financial Field last week did not much resemble the one of prior weeks, as the Owls’ offense exploded in a 54-28 win over South Florida.

Interestingly, this week’s opponent, Houston (5-4, 3-2), scored even more points than Temple on Saturday but still lost to SMU. The final score of 77-63 amounted to the most points scored in an FBS game that did not go into overtime. Cougars quarterback Clayton Tune threw 7 TD passes — only two fewer than SMU’s Tanner Mordecai.

So this week, Temple is a 20-point underdog at most sportsbooks in Houston despite quarterback E.J. Warner just having had his best game with 344 passing yards while being quite well complemented by Edward Saydee’s 265 rushing yards.  A moneyline return for an unlikely upset had odds of +800 from PointsBet, Caesars, and the Kambi sites.

And while the two teams combined for 117 points in their separate games on Saturday, the over/under is slightly less than that this week. The points total ranged from 56.5 to 57.5, with anyone expecting fireworks like last week’s well served by seeking out the lower number from PointsBet and Caesar to bet the over.