Temple will get another try at big upset after coming close 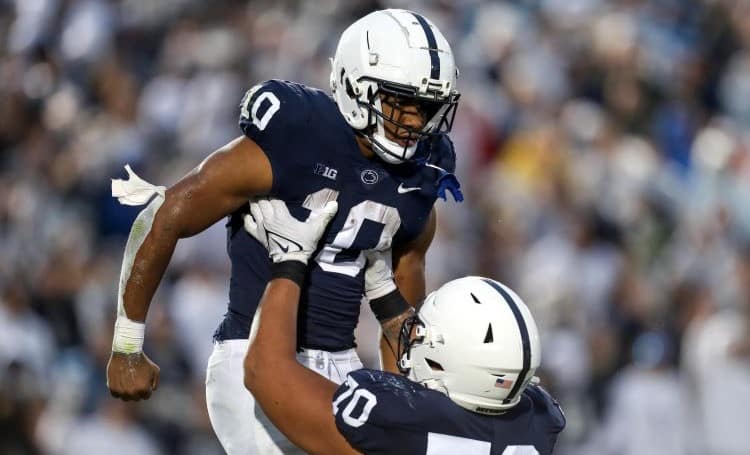 Penn State and Pitt both trounced their opponents by 30 points on Saturday, and they’re favored again to win this week — though oddsmakers think the margins will be a little tighter.

Temple, meanwhile, almost pulled off a stunning upset over Houston, only to succumb by 7 points in the final minute. They’re a big underdog again against No. 22 Cincinnati Saturday.

Penn Bets has analyzed all of the Pennsylvania online sportsbooks’ betting lines early in the week to provide the best options for those thinking of betting on games involving the state’s three top college programs.

The whole history of the series between Penn State (8-2, 5-2 Big Ten) and Rutgers (4-6, 1-6) has been one-sided, so it shouldn’t be a shock to see oddsmakers sizing things up that way for the teams’ meeting Saturday afternoon in Piscataway, New Jersey.

As of midday Tuesday, Penn State was a 19-point favorite at some sites (DraftKings, Betway, Betfred) and 19.5 at others (FanDuel, Caesars Sportsbook, FOX Bet). The best return a Penn State backer could get on the moneyline was -1250 from FanDuel. The over/under was either 44.5 or 45, with FanDuel the best option for “over” bettors using the 44.5.

The wide point spread comes after Penn State throttled an opponent for the second straight week in shutting down Maryland 30-0. Rutgers, meanwhile, was losing its third straight game in falling 27-21 to Michigan State.

In the longtime series between the two schools, Penn State holds a 30-2 edge and has beaten the Scarlet Knights 15 straight times. In each of their last seven meetings, Rutgers has failed to score more than 7 points, including last year’s 28-0 result at Beaver Stadium.

All of that would seem to portend a tough time for Rutgers quarterback Gavin Wimsatt in his fourth career start, facing a Penn State defense that held Maryland behind experienced signal-caller Taulia Tagovailoa to 134 total yards and 2.2 yards per play. The Scarlet Knights’ defenders, meanwhile, might have their hands full trying to stop Penn State’s running game. Nick Singleton ran 11 times for 122 yards and two scores versus Maryland, while fellow freshman Kaytron Allen had 16 carries for 73 yards.

Nick Singleton ran through the ENTIRE STATE OF MARYLAND 😤😤😤pic.twitter.com/aAvSMd9bct

Duke (7-3, 4-2) under new coach Mike Elko has already had its best season in many years, while Pitt (6-4, 3-3) is coming off two dominant victories that have restored potential luster to its 2022 campaign.

Even though Duke’s 24-7 win over Virginia Tech Saturday marked its third straight win, the oddsmakers like the Panthers for the game with a noon start at Acrisure Stadium. Pitt was a 7.5-point favorite across the board Tuesday, with DraftKings making things a little tastier for Pitt bettors by reducing the vig to -105. The Kambi-backed sites like Barstool Sports, BetRivers, betPARX, and Unibet offered the best moneyline return on Pitt at -286. The over/under everywhere stood at 52.5.

It’s unlikely Pitt will start anywhere near as spectacularly as it did in its 37-7 rout of Virginia, when its first two defensive plays of the game were pick-six interceptions.

The Panthers probably won’t need the defensive points, however, if Israel Abanikanda continues running as he has. He scored his nation-leading 18th TD of the season Saturday while running for 121 yards.

In their series, Pitt has won six straight games against Duke, but this is a better edition of the Blue Devils, whose seven wins with two games remaining are already their most since 2018. Quarterback Riley Leonard leads the offense, and against Virginia Tech he threw for 262 yards and two TDs and ran for 48 yards and a score.

Against the Hokies, Duke held an opponent under 105 yards rushing for the sixth time, and it has won all six of those games. How that defense holds up against Abanikanda could determine whether Duke’s winning streak comes to an end.

Few would have expected Temple as a 20-point underdog to be leading Houston with less than a minute remaining last Saturday. That was the situation, however, even though the defense couldn’t prevent a Cougars scoring drive that left the Owls dejected by the 43-36 final score.

Things don’t get any easier this week for Temple (3-7, 1-5) in hosting nationally ranked Cincinnati (8-2, 5-1), which is hoping to win the American Athletic Conference. The Bearcats were favored Tuesday by as many as 17.5 points at BetMGM, the best site for a Temple backer to use in this case. For a believer that an upset will come true this time, DraftKings was offering +675 on the Owls moneyline. The over/under was 51 or 51.5, depending on the site.

The Houston game marked the second straight where Temple’s long-dormant offense came alive, after having scored 54 points the week before against South Florida. And this time, quarterback E.J. Warner set school records with 42 completions and 486 passing yards.

That will be harder to do against a Bearcats team that has allowed more than 25 points in just two games this year, with its only losses coming against Arkansas and No. 17 UCF.