State Of The Union: Philly Third Favorite For MLS Cup Ahead Of Sunday Showdown 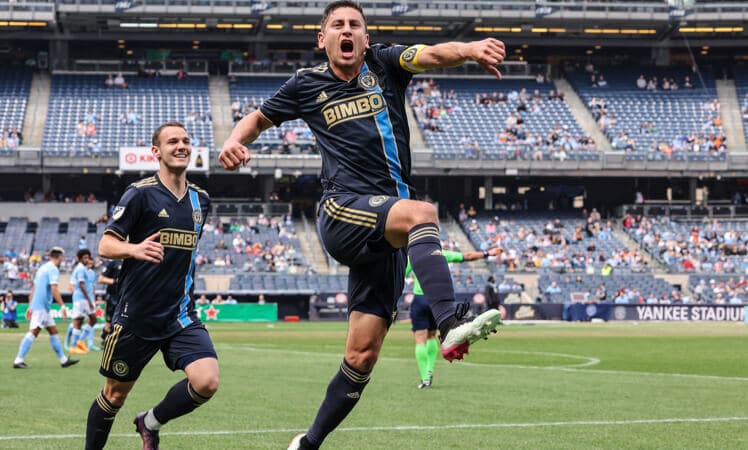 Dating back to at least the 1940s, coaches and players who are left unsatisfied by games ending in ties have compared the result to “kissing your sister.” Well, so far this MLS season, the Philadelphia Union players can’t seem to keep their lips off their sisters.

Through 15 regular season games, the Union have only lost once. But they have also only managed six victories. That’s because eight of their 15 matches have ended deadlocked.

At 6-1-8, with 26 points in 15 games, the Union sit in second place in the Eastern Conference, behind only New York City FC, whose 8-3-3 record adds up to 27 points in 14 games. On Sunday at 6 p.m., the Union host that very NYCFC at Subaru Park in Chester, in what shapes up as the most significant showdown of the first half of Philadelphia’s season.

Pennsylvania’s legal sportsbooks make the Union the favorites — but there’s not a whole lot on the odds board separating a Philly win, a New York win, and, of course, a draw.

The latest ESPN power rankings have New York City No. 2 in the 28-team league and the Union rated seventh, reflecting Philly’s recent mediocrity. The team has gone 1-1-7 over the last six weeks since starting the season 5-0-1. Five of the Union’s eight draws have come after they coughed up a lead.

Still, Union goaltender Andre Blake is among the MLS’ best, tied for second in the league with 6 clean sheets. The league leader? NYFC goalie Sean Johnson, with 8 clean sheets.

The most customer-friendly wagering prices for Sunday’s game can all be found at the sportsbooks that utilize Kambi’s tech, including BetRivers, Parx, Barstool, and Unibet. Those books have the Union favored to win at +155, New York City at +180, and a draw paying out at +240.

These two teams have met once already with this season, with the Union prevailing 2-0 on March 19 at Yankee Stadium.

As the midpoint of the Union’s season nears — after two more games, at the end of June, they’ll be 17 games into their 34-game schedule — they stand as a solid contender, but not quite a frontrunner, to raise the MLS Cup.

At BetMGM and the Kambi books, LAFC is favored to win it all at +500, followed by NYCFC at +700. The Union, despite slipping to seventh in those ESPN power rankings, have the third-shortest odds at +900.

That’s a modest improvement over where coach Jim Curtin’s squad stood in the preseason. Via BetMGM: LAFC, New England, and Seattle were co-favorites at 7/1, followed by NYCFC at 10/1 and Sporting Kansas City at 12/1, then the Union in a four-way tie at 16/1.

So perhaps you could call Philadelphia’s success to this point in the season a modest surprise. But the team has fallen back to the pack with draw after draw after draw of late. An outright win over New York City on Sunday would make sports bettors holding Union futures tickets feel a lot better about this club’s chances of kissing a trophy in the fall.