Still The Underdogs, Phillies Come Home To Phanatics For Game 3

Phils get next three games at home after splitting in Houston 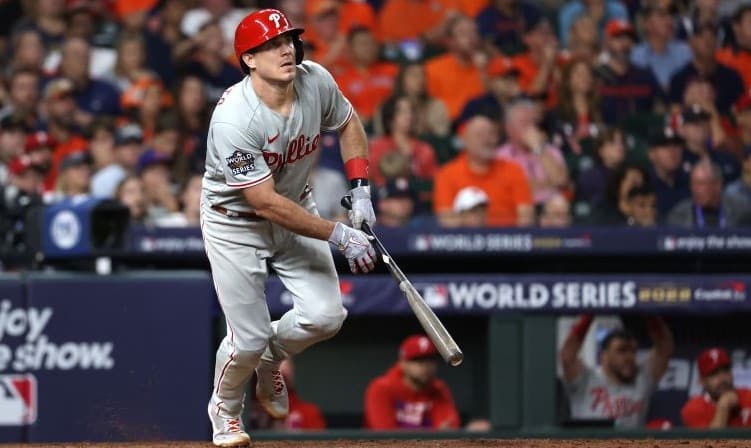 The Phillies have gained home field advantage in the World Series by hosting the next three games starting Monday night, but that doesn’t make them the oddsmakers’ favorite.

After splitting the first two games in Houston Friday and Saturday, Philadelphia is just a bit smaller underdog than it was before the start of the series against the deep and talented Astros.

FanDuel makes the Phils +145 to win three more games of the possible five remaining, whereas it had made them +165 last week to win the Fall Classic. The best payoff for a Phillies backer as of Monday morning at Pennsylvania’s online sportsbooks was the +160 offered by Caesars Sportsbook, down from the +170 it had offered last Friday.

Those original odds came before J.T. Realmuto’s 10th inning home run finished a stirring 6-5 comeback from a 5-0 deficit in Game 1 and Astros starter Framber Valdez effectively shut down Philadelphia’s hitters in a 5-2 Houston win in Game 2.

A similar underdog for Game 3

For Monday’s Game 3, midseason trade acquisition Noah Syndergaard will pitch for the Phillies against Astros veteran Lance McCullers Jr. And again, despite playing in front of an undoubtedly raucous crowd at Citizens Bank Ballpark, Philadelphia is an underdog.

The Phillies won’t have any of their top three starters on the mound for Game 3 of the #WorldSeries. So they hope the home crowd can provide an advantage.

“There’s nothing like it,” Bryce Harper said. “We’re excited to get back.”https://t.co/7JiQIPBKda

BetRivers was offering a +118 moneyline return for the Phils to go up 2-1 in the series, with PointsBet, FOX Bet, and Caesars all a bit behind that at +115.

Bettors expecting a higher-scoring game might want to use the 7.5 over/under on runs offered by PointsBet (-115 vig to bet the over) or FanDuel (-120 on the over). Other sites posted the run total at 8, generally with inflated vig to take the under, but with FOX Bet making it -110 both ways.

Syndergaard has seen limited postseason action but done fine when called upon, giving up one run and three hits in 5.1 innings. That was after going a combined 10-10 with a 3.94 ERA and 1.26 WHIP for the Los Angeles Angels and Phils in the regular season.

Though just 29, McCullers has been pitching in postseason games for Houston since 2015. In battling back from a forearm injury and pitching only since August, he was 4-2 in the regular season with a sterling 2.27 ERA and 1.24 WHIP. He’s made two postseason starts, giving up 3 runs in 11 innings.

Tuesday night’s Game 4 starters are expected to be Ranger Suarez for Philadelphia and Christian Javier for Houston.

The sportsbooks have some special offers tied to Monday night’s game, with more likely to show up before first pitch just after 8 p.m.

DraftKings has a “City of Brotherly Love Cross Court Special,” combining the number of Phillies hits in the game with the number of 3-pointers made by the 76ers in visiting the Washington Wizards Monday night. The Sixers have averaged 13.3 3-pointers made so far this season, and DraftKings sets the line on the hits/3’s combo at over 20.5 (+105) or under 20.5 (-130).

Caesars, meanwhile, promotes a “Bryce Bounce Back Super Boost,” combining a Phillies victory with Bryce Harper garnering at least one hit at a parlay price of +200.

Harper, who was hitless Saturday after going 2-for-4 in the opener, has seen his MVP odds increase at BetMGM to +850 from +700 before the series started. After his heroics in Game 1, Realmuto is also +850.