Things have gone wrong for Penn State and Temple, but Pitt is a two-TD favorite over Virginia 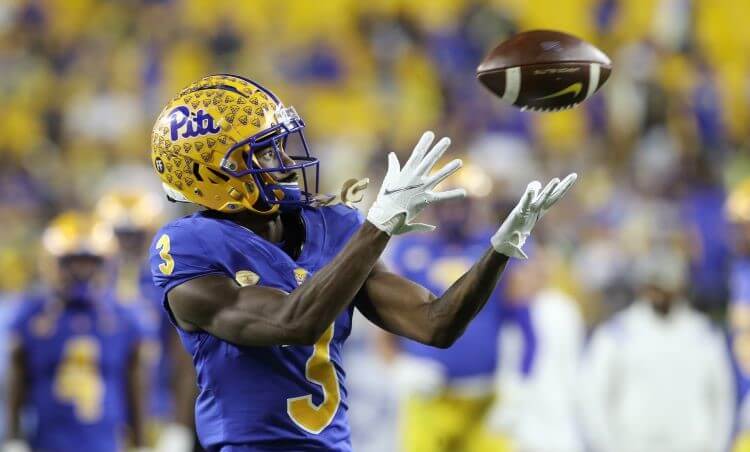 A once-promising Penn State football season has spiraled depressingly downward and Temple has been playing even worse than the lowly expectations for its campaign, but Pitt can do something rare Saturday.

Pennsylvania’s online sportsbooks favor the 20th-ranked Panthers by two touchdowns over Virginia in a game that could clinch just their second appearance in an ACC title game.

Pitt has played second fiddle to Penn State in Pennsylvania college football prominence for decades, but the Nittany Lions have fallen out of both Big Ten contention and the national rankings after losing four of their last five games. Still, they are heavily favored to beat visiting Rutgers at Beaver Stadium Saturday.

Temple, meanwhile, visits Tulsa, where oddsmakers project they will be blown out by an opponent for the sixth straight week.

Just like in its prior loss to national powerhouse Ohio State, Penn State (6-4, 3-4 Big Ten) competed well last week against Michigan, leading in the fourth quarter before succumbing 21-17.

It was one more notch of disappointment for a team that had reached a No. 4 national ranking when 5-0. Now the Nittany Lions need to be sufficiently motivated to regroup by noon Saturday against a lesser opponent in Rutgers (5-5, 2-5), which itself has plenty to play for in seeking a sixth win to become bowl eligible.

Penn State was favored by as many as 17.5 points Thursday. Penn State bettors had several choices with the state’s sportsbooks to give just 17 points, with the best option being Caesars because it was the only one offering that spread at the standard -110 vig. Any backer of the Nittany Lions would have to risk a lot to bet them on the moneyline, with the -875 from Betfred the best price available.

The points total over/under ranged from a low of 45.5 at FOX Bet to a high of 47 at Betfred. That points total is fairly low for a college game, reflecting not just a Penn State offense that has trouble scoring, but a Rutgers team that has managed its .500 season by being much stronger on defense than offense. The Scarlet Knights are averaging just 15.3 points per game in the Big Ten, and that’s even after pasting Indiana 38-3 last week in one of the program’s best performances since joining the conference in 2014.

Penn State got one of its best performances by a runner last week when Keyvone Lee ran for 88 yards on 20 carries, but its offensive fortunes still likely rest on the shoulders of Sean Clifford. With 17 TD passes on the season, the senior quarterback needs better protection than he got against Michigan, when he was sacked seven times.

In the Lions’ favor, they’ve won 14 straight against Rutgers, including a 23-7 romp last year.

Pitt can atone for upset loss to Miami

Pitt (8-2, 5-1) could have virtually wrapped up the ACC Coastal Division title a few weeks ago if it had beaten underdog Miami at Heinz Field, but now it has a chance to really lock things up by beating Virginia (6-4, 4-2), the only team a game behind it in the division standings.

And it’s getting the Cavaliers at a good time, as their star quarterback Brennan Armstrong — with gaudy stats to rival those of Panthers QB Kenny Pickett — hurt his ribs two games ago and missed Virginia’s 28-3 loss to Notre Dame last week. Armstrong is cautiously being described as “day to day” in terms of his ability to be ready for the 3:30 p.m. contest in Pittsburgh.

The Panthers, victorious in overtime over North Carolina last week, were a 14.5-point favorite across the board at the sportsbooks Thursday. The best moneyline available to bet on them was the -550 from BetMGM and FOX Bet. The over/under appeared to be set as though Armstrong would be playing, as the lowest number was 65.5 from FanDuel. BetMGM and FOX Bet both had it the highest, at 66.5.

While Pickett has led Pitt to its most successful season in many years by handling a passing attack averaging 373.1 yards per game, fourth in the nation, the Cavaliers have led the nation with 380.5 per game. That’s even without Armstrong playing last week, when freshman Jay Woolfolk was thrown to the wolves against Notre Dame and the entire offense managed just 278 yards.

Even if Virginia has Armstrong available, one of Pitt’s advantages is a much stouter defense. The Cavaliers have given up 462 yards per game, including 249 yards on the ground by Notre Dame and 385 rushing yards by BYU in the prior contest.

If Pitt wins, it will head to the Dec. 4 title game in Charlotte, N.C., no matter what it does when visiting Syracuse next week. If it loses, it will have to count on winning that finale and the Cavaliers losing to Virginia Tech in their own final contest. DraftKings makes Pitt -135 to win the conference title, with Wake Forest +180 as Pitt’s likely opponent in the title game. Virginia’s chances, meanwhile, are +2500.

Temple loses games and its quarterback

Temple (3-7, 1-5) couldn’t cover the 25.5-point spread last week in a 37-8 loss to Houston, and that’s become an recurring nightmare. In losing five straight games, the closest the Owls have come was a 20-point loss to South Florida. And that Oct. 23 game was the last time they scored in double digits.

Making matters worse for Saturday afternoon’s game at Tulsa (4-6, 3-3), it was announced Thursday that Temple quarterback D’Wan Mathis was leaving the program immediately and entering the transfer portal. That makes backup Justin Lynch the starting QB.

The sportsbooks wouldn’t care much for Temple’s chances with or without Mathis, as it is a 21.5-point underdog at best. Those willing to bet on the biggest upset in the NCAA since last week’s Kansas win over Texas could get +1100 on the moneyline from sites using Kambi odds like BetRivers, Unibet, and TwinSpires.