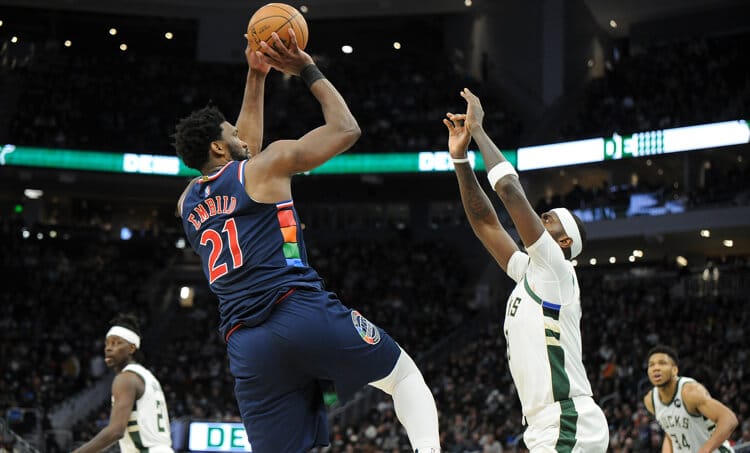 We were promised a more “normal” NBA season this year, with the bubbles and the empty arenas and the shortened seasons behind us. But is a near four-way tie atop the Eastern Conference in which each team’s fans are quietly rooting for their squad to finish third or fourth anyone’s idea of normal?

The top seed is there for the taking with less than two weeks to go in the regular season. It’s also there for the giving, because the prize for finishing first or second threatens to be a dangerous matchup with the preseason title favorites, the Brooklyn Nets. A fan — or a game-by-game bettor — can’t help but wonder just how motivated the Miami Heat, Boston Celtics, Milwaukee Bucks, and Philadelphia 76ers are to win games down the stretch.

The latter two of those teams face off Tuesday night at the Wells Fargo Center, and whoever wins will, for the moment, sit alone in first place in the East, while the losing team will find itself in fourth.

The talented Nets could realistically finish the regular season in eighth, ninth, or 10th, and could then emerge from the play-in round as either the seventh or eighth seed when the best-of-seven series begins. It’s creating a bizarre dynamic: Finish third or fourth, and you’ll play either Chicago, Toronto, or Cleveland as a clear favorite; finish first or second, and there’s a 50/50 chance you’re starting your postseason with a 50/50 series against Kevin Durant and Kyrie Irving.

Still, there’s every reason to believe the Sixers and Bucks will both be going all out for the win Tuesday night, in small part because it matters to their respective superstars’ MVP chances (more on that at the end of this article).

Then we’ll have to wait about two weeks to see if Tuesday’s winner has any regrets.

Sixers favored at home, but barely

As of Tuesday morning, all of Pennsylvania’s mobile sportsbooks had the Sixers favored by 1.5 over Milwaukee, with the exception of Caesars, which had a 1-point spread.

On the moneyline, BetMGM and relative newcomer to the state PointsBet Sportsbook PA offered the best price on the 76ers at -120, while the Bucks fetched a return of +105 at DraftKings and Caesars.

The teams have split their two meetings so far this season, with the road team winning each time. Prior to the acquisition of James Harden, Tyrese Maxey put up 31 points for the Sixers in a losing effort when Joel Embiid sat out on Nov. 9. On Feb. 17, in the final Sixers game before Harden joined the lineup, Embiid produced a massive 42-14 line to help Philly eke out a win in Milwaukee.

The Sixers come into this game off a 2-1 West Coast road trip, having won 10 of 14 with Harden in the lineup. The all-star guard is averaging 21.4 points, 9.2 assists, and 7.3 rebounds in March. Embiid is averaging 30.2 points and 12.3 rebounds this month. For the visitors, Giannis Antetokounmpo has even gaudier March numbers at 31.5 ppg and 12.6 rpg. The Bucks have gone 10-4 since losing to the Sixers just before the All-Star break.

At FanDuel Sportsbook, here are the over/under player prop lines for the game’s 10 anticipated starters:

There was significant movement in the NBA MVP race at some sportsbooks Tuesday morning, following a Monday night triple-double by Nikola Jokic and an ESPN straw poll that saw 62 of 100 media members naming the Denver Nuggets center first on their if-the-season-ended-today ballots. Now some operators peg Jokic as the co-favorite with Embiid for the MVP award.

But with a focus on Tuesday’s head-to-head matchup, let’s compare the season-long stats of Embiid and Antetokounmpo:

And their teams have the exact same records. As for who’s had the better supporting cast, there isn’t a clear edge to be found. Since the Harden trade, it’s probably been Embiid, but for the first two-thirds of the season, with Ben Simmons sitting out and the Sixers’ second-best player boiling down to a debate between Tobias Harris, Seth Curry, and a sophomore-season Maxey, it was undoubtedly Antetokounmpo who had more help.

Based on all of that, you’d think their MVP odds would be similar. Not so much. As of Tuesday morning, Embiid’s prices ranged from -227 (FOX Bet) to -110 (PointsBet and FanDuel). And Antetokounmpo’s odds stretched from a low of +850 (Caesars) to a high of +1200 at numerous books.

Why such a vast difference? Narrative and expectations. The Bucks are doing exactly what they were supposed to do as defending champs, and two-time MVP Giannis is putting up pretty much the same numbers he always does. Embiid is having the best — and healthiest — season of his career, and for most of the season has had the Sixers overachieving in the win-loss column, powering them to a position from which it made sense to acquire Harden. One of these players has won two MVP awards already, while the other was a hard-luck runner-up a year ago — and it feels like maybe it’s “his time.”

So is there still a path to Antetokounmpo winning and earning a handsome reward for a bettor who still wants to take him at 12/1? Yes, but it depends heavily on team results. Jokic is priced from -110 to +170, in between “The Process” and “The Greek Freak,” at most books. For either Embiid or Antetokoumpo to lock up the MVP, Denver can’t improve much in the Western Conference standings. The Nuggets are in sixth place, 1.5 games shy of fourth and just two games away from slipping to seventh and the play-in tournament. Jokic could become the favorite if the Nuggets finish strong and climb to fourth, or he could see all hope of winning vanish if they drop to seventh.

If the Nuggets finish sixth or seventh, then Giannis needs his team to finish comfortably ahead of Embiid’s. If the Bucks grab the top seed and the 76ers are two or three games back with the third or fourth seed, there’s your outside chance of Antetokounmpo commanding the votes.

What that means is, realistically, the Bucks need to beat the Sixers on Tuesday night for Giannis’ path to the MVP award to remain open — especially given that Philly has two games against the lowly Pacers and two against the lowlier Pistons among its final seven.