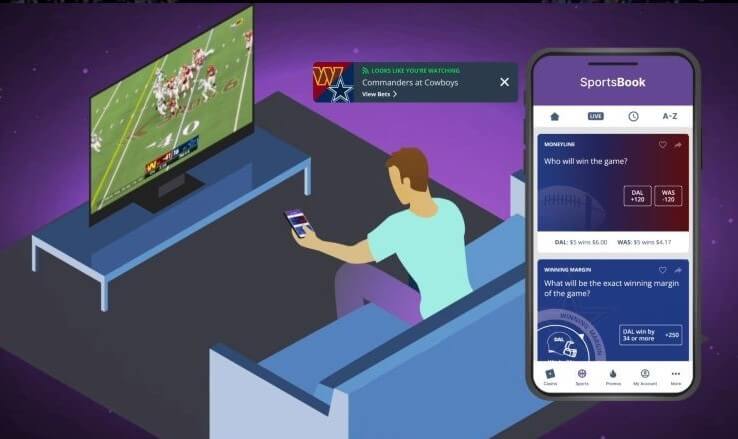 Let’s say you’re an Eagles fan with a proclivity to bet on NFL football more than any other sport, and a proven interest in betting pre-game player props as your favorite type of wager — especially for a televised game you’re planning to watch.

What if your mobile sports betting app could factor in all that information and use it to personalize and streamline the betting process? What if the day before the Eagles’ opener against the Detroit Lions on Sept. 11, the first thing showing up on your app’s screen isn’t a long list of different sports, but the option to bet the over/under on DeVonta Smith’s receptions in Sunday’s game?

That’s exactly what’s supposed to happen starting this fall for users of betPARX, the Parx Casino sports betting app that will be the first among Pennsylvania’s online sportsbooks to employ new user-centric technology developed by Epoxy.ai, a startup based in Berwyn, Pennsylvania.

The small tech company, co-founded by Jason Angelides and Chris Reynolds, has spent more than a year honing the platform that betPARX can incorporate to identify preferred options among its thousands of customers. The intent, Angelides said, is to have it ready by the start of the NFL season to help the operator offer a better, easier experience for customers, making it more likely betPARX will retain them over the long haul.

“I can tell you this is going to be the first implementation of its kind — what we consider the next generation of sports entertainment around gaming,” Angelides told Penn Bets. “It’s all about simplifying and reducing friction and making it fun.”

If possible with stats, why not betting?

Angelides and Reynolds have a track record of blending technology, sports, media, and customer focus, though not in the betting realm.

Their prior company, OneTwoSee, was so good at intertwining relevant sports statistics with live game broadcasts that the company was purchased by Comcast in 2016. The two were employed there for several years before venturing on their own again with a new entrepreneurial idea in the wake of the 2018 U.S. Supreme Court decision that has broadened legal sports betting to Pennsylvania and 30-plus other states.

Angelides is a casual sports bettor himself, and he found the user experience on sportsbooks apps — it didn’t matter which — to be clumsy and inefficient in the modern-day world of instant button-pushing gratification. His biggest betting interest might be on NBA and the 76ers, but his sportsbook’s betting menu will be identical to someone who favors European soccer. The major national operators have been more focused on acquiring customers than adopting technology that can provide those users the best experience, he suggested.

“I consider myself the target audience for our technology,” he said. “I like placing wagers, but it’s got to be simple for me. Frankly, I find the interfaces so slow and cumbersome, and I have to do lots of calculations.”

What Expoxy.ai is doing for betPARX is tracing all of its customers’ betting histories to determine their interests. Come September, three friends with gambling interests who are sitting next to one another might call up the same app but see three different betting options appear on their screens, instead of the current one-size-fits-all version.

“We look at it as a funnel,” Angelides said. “The more data points you have, the more stuff we know, the more accurate we’re going to be. … With Parx, the first thing was we ran through their entire data set and categorized their users. We can do that very quickly. Based on your type of bets, the amount of money you spend, we’re going to put you in a bucket. Then, as we get more data associated with your behavior, your profile gets more and more narrow, and we get better and better at putting the right content in front of you.”

Your TV viewing habits can help

On top of personalizing betting options, Epoxy.ai is providing betPARX a tool to make use of recreational sports bettors’ known tendency to be more likely to wager on a game they can watch.

The app’s users will be asked if they want to activate their smartphone microphone’s ability to listen to what they’re watching on television or other devices. If a customer opts in, Angelides explained, it will lead betPARX to bring up various in-game betting options for a user to see readily rather than forcing them to hunt down potential choices on the contest they’re viewing.

He said this is a natural case of carrying over into the sports betting world the same kind of business model already used by Google, Amazon, and Netflix — whether smartphone users are aware of it or not — to tailor offerings to customers’ proven interests.

“Why not put the most relevant bets in front of you for that particular game?” Angelides suggested. “If watching the Eagles-Falcons, we’re going to take you directly to offers associated with that game, because we understand where you are in the broadcast. We can also understand when you change the channel, because when you switch over to the Sixers game, do you want to see Sixers offers? Sure.”

Parx getting out front of bigger competitors

While Epoxy.ai and Parx, owned by Greenwood Gaming and Entertainment, are both based in southeastern Pennsylvania, Angelides said their relationship stems not from geography but the advantage betPARX has over larger competitors in more quickly adopting the tech firm’s platform and innovations.

“We were looking for somebody who understands the vision, that today’s experiences aren’t satisfactory, that to meet where things are going to be in the next three or four years, things are going to have to change,” Angelides said. “They’re interested in driving more consumption, more retention, and a happy, more satisfied customer, and that is a fundamental problem in the industry.”

While betPARX is hoping to get bigger with the help of Epoxy.ai, for now it operates outside of Pennsylvania only in New Jersey and Michigan. In Pennsylvania, its level of betting handle and revenue is far behind those of industry leaders FanDuel and DraftKings. In May, betPARX took $8.7 million in bets online and reported gross revenue of $943,112.

Parx officials do not generally comment to affiliate media sites such as Penn Bets, but in a recent Philadelphia Inquirer article, betPARX executive Matthew Cullen echoed Angelides in describing what the company hopes to get out of the relationship and new technology.

And at the start of the NFL season, his customers apparently will find out just how much easier that can be.