On Monday, the upcoming Live! Casino & Hotel Philadelphia told Pennsylvania that it plans to have sports betting, but details are sparse.

A seventh brick-and-mortar location for sports betting in the Philadelphia area?

Stadium LLC Philadelphia, a subsidiary of the Cordish Companies, owner of a top casino in Maryland, told Pennsylvania gaming regulators on Monday in a public hearing in Philadelphia that the foundation was finally laid last month for its long-awaited Philly casino, which plans to have a retail “sportsbook.” The casino was awarded a license back in November 2014, so the time came for petitioning the Pennsylvania Gaming Control Board for a license renewal. The hearing went favorably for Stadium, despite regulators taking out the finest of their fine-tooth combs to go over the company’s public presentation.

It’s been a long wait for the Las Vegas-style casino, with regulators indicating back in December at Stadium’s hearing for a smaller, so-called mini-casino that they were a little frustrated with the progress on the mothballed Live! Casino & Hotel Philadelphia. It’s a $700 mm investment for the city’s stadium district.

Stadium said Monday that it plans to have sports betting at its property. The company provided scant details to regulators, simply showing the following rendering of a sports bar that doesn’t appear to have any betting windows or kiosks. It’s unclear in what capacity the casino will have sports betting. 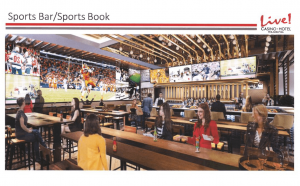 The casino is currently slated to open in December 2020. Pennsylvania is expected to finally begin online/mobile sports betting this month, which is far more popular than betting in a retail setting. In neighboring New Jersey, more than 80% of sports betting activity comes over the internet.

Pennsylvania sports betting could by 80% or more online by the time Live! Philadelphia opens.

Stadium might not be looking to commit to brick-and-mortar sports betting plans at this point, thanks to the upcoming launch of online gambling and with the Philly market already being crowded. The opening of a sportsbook at Live! Philadelphia in late 2020 won’t generate nearly the same fanfare that rivals enjoyed with their opening of their respective books.

The South Philadelphia Turf Club, owned by the owners of Parx Casino, opened its sportsbook in January. The Turf Club is within walking distance of the site of Live! Philadelphia, so the latter already has competition around the city’s sports venues. Stadium doesn’t yet have a sports betting certificate from the PGCB. In fact, it hasn’t even applied for the $10 mm approval.

Stadium also does not have a sports betting partner lined up for the PA market.

Regulators held the roughly hour-long hearing to gather information and comments from Stadium. They didn’t make a decision on the license. That will come at a future meeting in Harrisburg. Though regulators were thorough vetting the mothballed project, nothing happened Monday that would indicate Stadium won’t receive another five-year stamp of approval.

While Stadium hasn’t sought a sports betting certificate yet, it has sought the regulatory approval for online casino gambling, including iSlots and table games.

The company is also awaiting a decision on its $150 mm mini-casino in Western PA. Under PA law, Stadium was able to bid for the Category 4 license despite not having a casino in Pennsylvania. It just needed the license for the Category 2. Regulators stated that the projects need to run parallel, however.

Below is the video from Monday’s hearing.