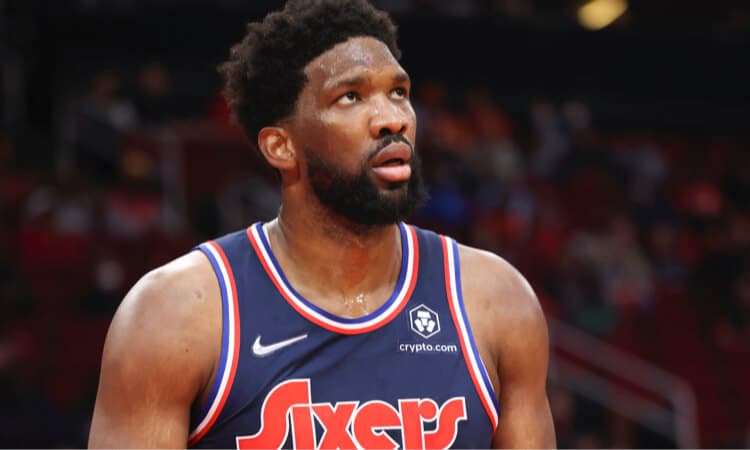 The idea behind what became known as “The Process,” which began in 2013 with the hiring of GM Sam Hinkie and head coach Brett Brown, was for the 76ers to escape mediocrity. Four of the previous six years they’d gone to the playoffs with a winning percentage between 48.8% and 53%, three of those four ended with the a first-round playoff exit, and once they made the second round strictly because the top-seeded Chicago Bulls lost both Derrick Rose and Joakim Noah to injury.

At no point since 2002-03 — a full decade — had the Sixers been a serious contender. So they traded mediocrity for a few seasons of utter atrocity in hopes of someday being elite.

Did it work? Sort of.

Two games away from the midpoint of the 2021-22 season, the Sixers are riding a seven-game winning streak (with asterisks, as they and the rest of the NBA cobble together COVID-compromised rosters) and sit at 23-16, in fifth place in the Eastern Conference, 4½ games from the top spot and 4 games from being outside the playoff picture.

Embiid has been playing at an MVP level during the winning streak, excelling with whatever cast is around him. Over these seven games, the big man has scored at least 31 points every time on shooting percentages of 56% from the field, 42% from three, and 83% from the line, and he’s averaging 10.1 rebounds, 4.7 assists, and 1.4 blocks.

Pennsylvania’s regulated sportsbooks’ futures odds on the Sixers sit in something of a no man’s land. They’re possibly a tad optimistic in terms of how deep this team, as currently constructed, can go, even with Embiid bringing his “A” game every night. But they’re possibly loaded with value if GM Daryl Morey can turn Ben Simmons — the former No. 1 overall pick who hasn’t suited up this season — into assets that pair well with Embiid.

Philly’s odds to win the whole she-bang as of Wednesday morning range from as low as +2100 at FanDuel to as high as +2500 at Caesars, BetMGM, and Betfred. That places them in a tie with the Eastern Conference-leading Chicago Bulls for the eighth-shortest price.

Every sportsbook has them at +1000 to win the Eastern Conference, slotting them either fourth or fifth depending on the book (the Bulls’ conference title price varies). There’s a massive dropoff from the Sixers to the next team, the Atlanta Hawks, who can be found as high as +3000. Essentially, the sportsbooks are saying there are five teams that can realistically win the East, and the 76ers are one of them.

The Sixers are a somewhat intriguing +450 at both FOX Bet and BetMGM to win the Atlantic Division regular-season title, behind only the Brooklyn Nets, who are priced as high as -667. The 76ers only trail the talented but erratic Nets — who are still the overall title favorite — by 2 games.

Is there value in some of these prices? That depends on what happens with Simmons.

From the moment Simmons starred as the central character in the Sixers’ playoff collapse against the Atlanta Hawks during the spring of 2021, the three-time NBA All-Star and 2021 runner-up for Defensive Player of the Year was finished in Philly and needed to be traded. Drama and gamesmanship have dragged on for months, and the possible outcomes can generally be divided into three categories:

Option 1 is the one Morey has been holding out for — specifically hoping the underachieving Portland Trail Blazers decide to trade Damian Lillard. A healthy Lillard who can play like a reasonable facsimile of his prime self, paired with Embiid, instantly cuts the 76ers’ title and conference odds in half. Does that Lillard still exist? Could Bradley Beal become available as a slightly-lower-upside option? Morey has waited this long to trade Simmons in part because he still believes the answers to these questions could be yes, even though talks thus far have gotten nowhere.

Option 2 can go in all different directions. There are rumored trades with the Hawks (not ideal for Simmons’ psyche, but that’s not the Sixers’ concern) that could add depth and slightly upgrade Philly’s 2022 chances. Same with the Sacramento Kings, Cleveland Cavaliers, Minnesota Timberwolves, and Indiana Pacers, all of which have been floated in trade rumors. Complicating matters, the Sixers are reportedly trying to include arguably their second-best player, the excessively expensive Tobias Harris, in trade packages. The ratio of get-better-now to get-better-in-the-future varies, but given that Simmons is a total zero for Philly this season, any deal Morey makes figures to improve the team’s playoff success probability.

Option 3 means this is the team the Sixers are rolling with. If everyone is healthy, that’s a starting five of Embiid (+5000 at BetMGM to win MVP), Harris, Seth Curry, Tyrese Maxey (+12000 at FanDuel for Most Improved), and Danny Green, with Matisse Thybulle (+8000 for Defensive Player of the Year), Georges Niang, Furkan Korkmaz, Andre Drummond, and Shake Milton all in the playoff rotation. It’s basically last year’s team that fell in the second round of the playoffs, minus Simmons, with second-year point guard Maxey a much-improved contributor.

DraftKings Sportsbook has the team’s win total for the regular season at 49.5, with -130 juice on the over and +100 on the under. They need to go 27-16 to hit the over. With their current roster, based on the (impossible) assumption of full health for all teams, Penn Bets projects the Sixers to be favored in 27 of their remaining 43 games.

Will they make it eight straight?

The push for 50 wins continues Wednesday night with a home game against the Charlotte Hornets, who are riding a three-game winning streak and are just two spots behind the Sixers in the Eastern Conference standings.

The best moneyline price on the 76ers is -210 at DK and the Kambi books, while fading the home team can get you +180 on the moneyline at FanDuel and BetMGM. The over/under on total points varies between 226 and 226.5.

Both Harris and Curry are listed on the injury report as “day-to-day,” and lines could move based on their availability.