All Eyes On GM Morey As Another Uncertain 76ers Offseason Begins 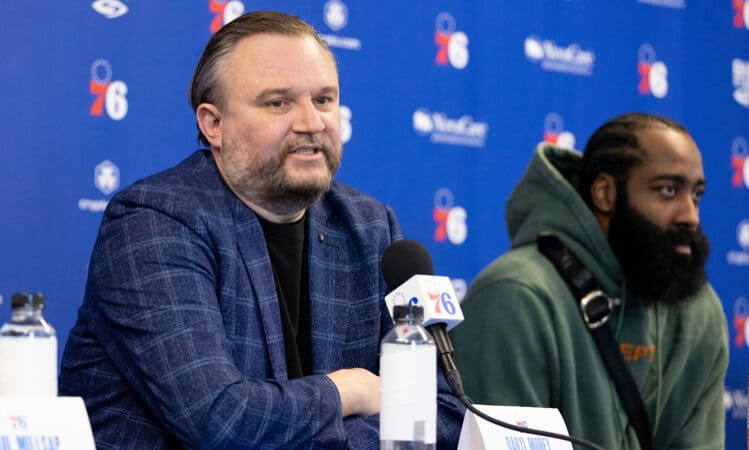 The 76ers were so close to getting over the hump this year.

All they needed were James Harden’s legs to age backward about three years, Joel Embiid to not suffer thumb, face, and head injuries in the first round of the playoffs, Tobias Harris and Tyrese Maxey to play like the best versions of themselves at all times, and maybe Jimmy Butler to have remained in a Sixers uniform three years ago.

That’s all it would have taken. Man, they were so close.

But here the Sixers are, starting another offseason after one winning round and one losing round of playoff action, searching for new answers to the same question: How do they build a championship-caliber team around their MVP-caliber center before his window closes?

The good news is Ben Simmons won’t hover over everything like he did a year ago. The bad news is it’s going to be tough for General Manager Daryl Morey to get into the nitty gritty of finding the right minor puzzle pieces until he deals with two different major questions hovering over the whole operation:

Morey said on Friday that both will remain part of the 2022-23 Sixers. But before taking that at face value, we should probably pause to consider how idiotic it would be to say literally anything else publicly. You don’t tell your significant other, “I’m pretty sure I’m going to be breaking up with you soon.” You fake a smile until it’s time to do the dumping.

The 76ers opened last season at Pennsylvania’s sportsbooks priced between +1600 and +2000 to win the NBA championship. Their odds got as short as +550 after they traded for Harden in February. In the end, though, it didn’t matter what price a Sixers bettor got. Hey, that’s the case every year for title tickets on 29 teams.

For the next several months, Morey will be the central figure in determining whether next season is different for this particular franchise.

As co-host of the popular Rights to Ricky Sanchez podcast since it launched in 2013, Spike Eskin has spent more time than just about anyone else thinking and talking about what’s gone right and what’s gone wrong for the Sixers during this “Process” era. So we asked him to set some odds on the key Sixers offseason markets, starting with the question of whether Rivers will be back.

Eskin sets fair odds at +400, at minimum, on Rivers returning for a third season as Sixers head coach. “My sense is that both parties want to move on,” said Eskin, whose podcast counts DraftKings Sportsbook among its sponsors.

So if Doc is out the door, who could replace him as the new 76ers coach? Some eye-catching names have been floated in the local media and on social media, including newly retired Villanova coach Jay Wright, Philly-born South Carolina women’s head coach Dawn Staley — like Wright, a two-time Naismith Award winner — and even just-retired Duke coaching icon Mike Krzyzewski.

“When you look at Morey historically, and when you see Tad Brown, the CEO who came from the Rockets, it just seems like it’s unlikely to me that he would make a hire this important with somebody that he doesn’t have a history with,” Eskin said. “There’s no connection I can see between Morey and Jay Wright. I would be shocked if it was Jay Wright. I would be more shocked if it was Dawn Staley. And for sure, Coach K is the longest shot of them all — but our podcast downloads would go through the roof on that episode.”

“Embiid wanted D’Antoni in the first place, and Morey has a history with him,” Eskin pointed out. “As for Sam Cassell, he’s a former point guard, which seems to go well for head coaches, he seems to have a great relationship with players, also has a connection to Morey, and has familiarity with the players already on the team.”

If Morey and Sixers fans thought they were trading for something approaching 2018 MVP Harden, they learned the hard way over the last three months that that player is gone, never to return. Still, some believe that with more time to coalesce with his Philly teammates and more time to recover fully from a lingering hamstring injury that might have impacted his 2022 performance, Harden could improve to some extent upon what we just saw.

Eskin thinks the one-year option is about a -300 favorite. He believes a long-term deal of around three years/$100 million is about +600, and Harden not signing with the Sixers at all is north of +900.

“Honestly, from a relationship management standpoint,” Eskin analyzed, “it’s probably better to sign him longer term than to basically tell him you’re not interested by asking him to play on a one-year deal when his future is up in the air anyway. In the end, I’d say there’s about a 1-in-10 chance he’s not on the Sixers next year.”

What title odds or Em-V-P odds would you need?

None of the sportsbooks have 2023 futures markets up yet — those should emerge as soon as a 2022 champ is crowned — but it’s never too early to think about what good Sixers futures value looks like.

So what price would Eskin need right now, heading into all this offseason uncertainty, to bet on the Sixers to win it all?

“I am typically pretty pessimistic about their chances. Going into the playoffs this year, I thought there was literally a zero percent chance they would win the title,” he said.

“For them to win the title next year, you’re betting on either a trade that we do not see coming, or several injuries on other teams. I think +2000, the price they started at last year, is too short. Something like +3000, I suppose there’s value. But I can’t, in my mind, get them to the same place that Boston, or Milwaukee, or even Phoenix or Dallas is at right now. I can’t see them beating more than one of those teams in a seven-game series in one playoff run.

“Their two best players — Harden isn’t capable of doing it, and Embiid is hurt in the playoffs every single year. On some level, it almost might benefit Embiid to have an early-season injury that keeps him out for six weeks, and they stay afloat, because he just seems so beat up at the end of every year. The problem is, they’re so bad with him off the court. They’ll end up a play-in team if he misses 30 games.”

And while Embiid saving miles on the odometer early in the season could have benefits to the team, such a scenario would tank his chances of improving upon his two consecutive MVP runner-up finishes.

Still, Eskin sees the Sixers big man as the second-most likely candidate for the top individual award next season. But he also sees a massive gulf between Embiid and the No. 1 candidate.

“So, in my head, it comes down to Embiid or Luka, but Luka’s going to be a pretty prohibitive favorite. If you could get Luka at +300 or +400, I would bet every penny on that. I think he would have to get hurt to not win it next year. I feel like every writer has been dying to do it, and now, the fact that he’s gone somewhere in the playoffs will give them an excuse to do it next year.