Deal to enhance profile starts this weekend at Pocono Raceway 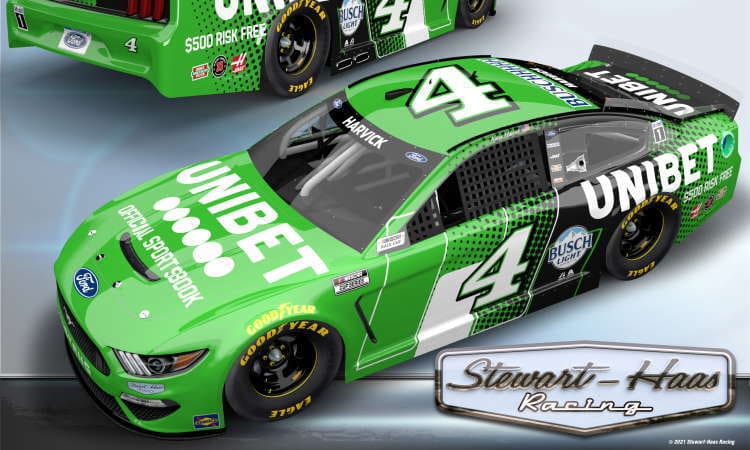 Unibet’s sponsor placement on Harvick’s No. 4 Ford Mustang for the weekend doubleheader will be on the front fender. Unibet has operated both retail and online sports betting and iGaming at Mohegan Sun Pocono in nearby Wilkes-Barre, approximately 30 miles from the track, since November 2019.

“Sponsorship is an important part of our marketing initiatives in the states, where sports betting is legal. Racing fans are extremely passionate about their sport and their driver in particular,” said Manuel Stan, senior vice president USA, Kindred, in a statement. “Unibet exists for this reason, to enhance fans’ passion for their sport. Our platform is straightforward, easy to understand and filled with insights that allow our players to make informed bets. Integrating Unibet into the sport that fans watch and cheer for is the best way to tell our story. We are By Players, For Players.”

Just past the $100 million handle mark

Some new threads arrived!! Happy to welcome @UnibetUS to the team!!

What sports bets do you have for this weekend? pic.twitter.com/O2ixjjbVNv

Harvick, the 2014 NASCAR Cup Series winner in his first season with Stewart-Haas Racing, posted his first career win at Pocono Raceway last year and is currently eighth in the points standings. He is ninth all-time with 58 NASCAR Cup Series wins and one of only four drivers to win the Daytona 500, Coca-Cola 600, Brickyard 400, and Southern 500.

“We’re proud to represent and work with Unibet, now and in the future,” Stewart-Haas Racing President Brett Frood said. “Fans are the lifeblood of our sport and Unibet offers a new and insightful way for fans to engage with our sport in a meaningful way. We’re looking forward to kicking off our partnership with Unibet this weekend at Pocono, where Pennsylvania residents can experience Unibet’s offerings firsthand.”

Unibet will be Harvick’s primary sponsor for NASCAR Cup Series races at Indianapolis Motor Speedway in August and Martinsville Speedway in Virginia in October, with the latter a playoffs “Round of 8” race. Unibet offers online sports betting in both Indiana and Virginia, having just launched in the latter in April.